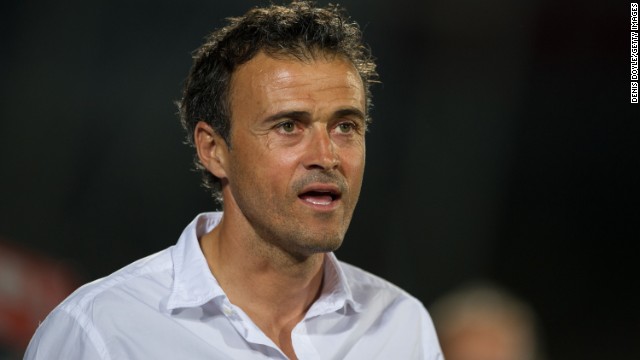 Luis Enrique has signed a two-year deal with Barcelona after relinquishing his role at Celta Vigo.
STORY HIGHLIGHTS

(CNN) -- Barcelona has appointed Luis Enrique as the club's new manager just days after losing out on the La Liga title.

Enrique, who has resigned from his role at Celta Vigo following a successful season in charge, returns to the club where he starred as a player between 1996 and 2004.

The 44-year-old has signed a two-year deal and replaces Tata Martino, who left the club after just one season at the helm.

In a statement, the club confirmed that Enrique was appointed following an endorsement from sporting director, Andoni Zubizarreta.

Barcelona endured a disappointing season, failing to retain its league title and crashing out of the Champions League following a defeat by Atletico Madrid.

Atletico also pipped Barca to the league title by securing a final day draw at Camp Nou on Saturday.

His departure, which came following Saturday's draw, raised few eyebrows following a reign perpetuated by rumors of unrest within the camp.

The attention will now turn to Enrique, who guided Celta to an impressive ninth place finish in La Liga.

Enrique, who arrived at the club for the first time as a player in 18 years ago following a move from Real Madrid, became a huge favorite with the club's supporters.

He won two league titles, two Spanish Cups, a European Cup Winners Cup and a European Super Cup during his eight years at the Camp Nou.

Enrique played 300 games for the club, scoring 109 goals and captained the side between 2002-2004 before retiring.

In 2008, the former Spain international coached Barcelona B, winning promotion in his second season in charge before leaving to take over at Italian side Roma three years later.

At Roma, he guided the club to a seventh place finish in Serie A and into the semifinals of the Italian Cup.

The confirmation of Enrique's appointment came shortly after Lionel Messi signed a new deal with the club, which reportedly takes his net annual salary to $27.4 million.

Messi agreed the deal last Friday but put pen to paper on the new contract Monday.

The Argentina striker has had a lean season by his own impossibly high standards, but has still scored 28 La Liga goals in his 30 games.

Messi joined the Catalans in 2000 at the age of 13 and has gone on to win 21 trophies with Barca, including six La Liga titles and three European Champions League crowns.

The 26-year was also voted World Player of the Year in four successive seasons, between 2009 and 2012, and will be one of the biggest names at the World Cup in Brazil.

Barcelona has also announced the signing of Borussia Mönchengladbach goalkeeper Marc-André Ter Stegen, who is expected to become the club's first-choice next season.