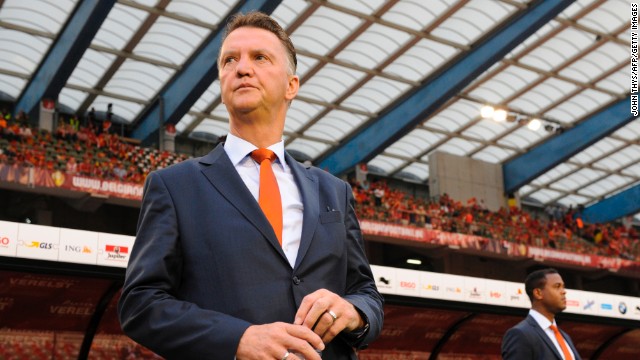 Louis van Gaal is the new manager of Manchester United after signing a three-year contract to succeed David Moyes. 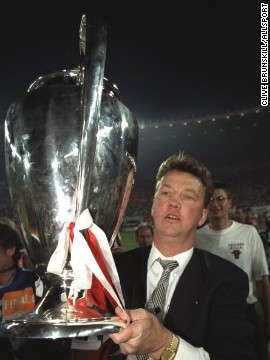 Van Gaal made a name for himself as a manager at Ajax, leading the Dutch club to a whole host of trophies including three Eredivisie titles, the UEFA Cup and the Champions League. 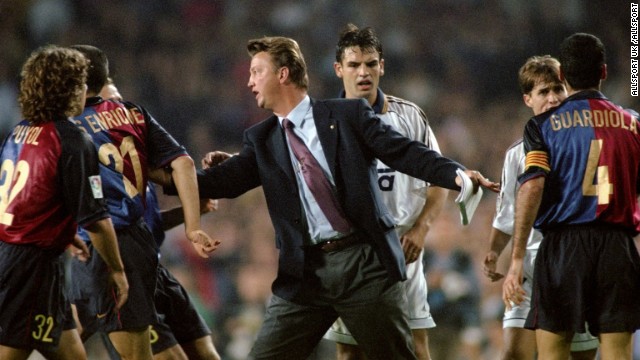 The Dutchman next moved on to Barcelona, guiding the side to back-to-back Spanish La Liga titles as well as the Copa del Rey and the UEFA Super Cup. 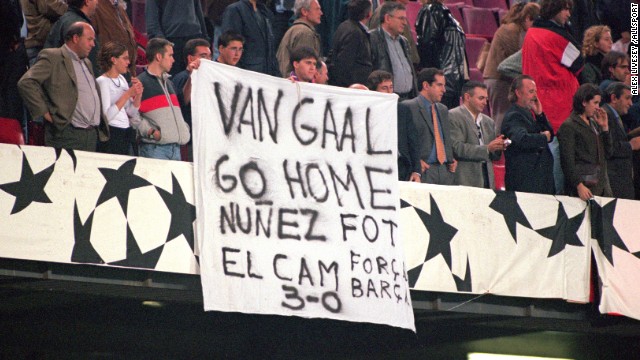 Van Gaal proved to be a divisive figure during his time at Barcelona and lasted less than a year in the job in his second spell in charge in 2002, with a string of bad results proving to be his downfall. 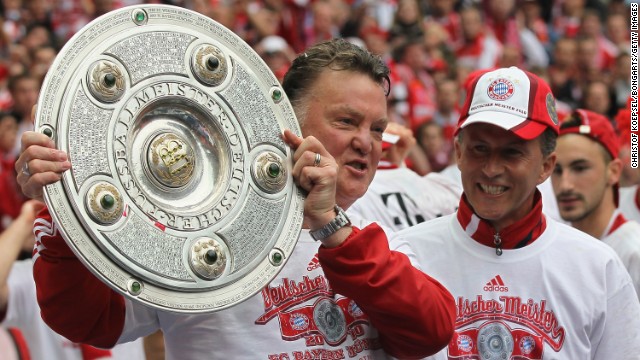 He also had success in Germany, claiming a league-and-cup double at Bayern Munich. However, he was sacked in 2011 after falling out with those in power at the Bundesliga club. 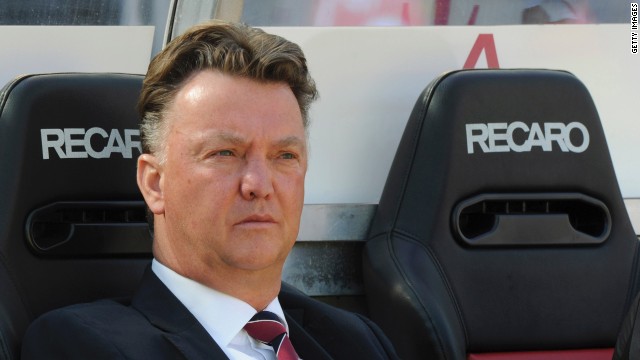 Van Gaal is known for his hard-line approach when it comes to management. "He's very strict and severe. So the players just have the chance to follow him or they are out, and he takes the next players," Mehmet Scholl, who worked with him at Bayern, told UK newspaper the Guardian. 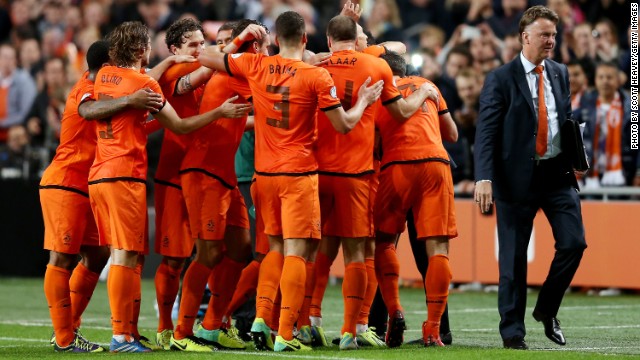 The 62-year-old is still in charge of the Netherlands -- for the second time in his career -- but will join United after the World Cup in Brazil. 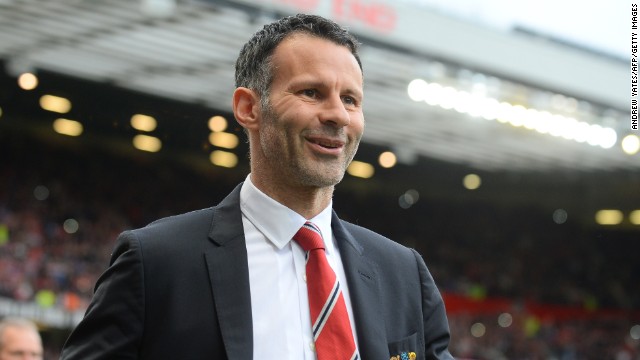 (CNN) -- He is the Chosen One MK II -- and he is hoping to make history of a more notable kind than his predecessor achieved.

After waiting 27 years to appoint a new manager, Manchester United's attempts to fill the void left by Alex Ferguson now focus on Louis van Gaal -- who on Monday was named to succeed David Moyes, sacked in April after enduring a miserable campaign in charge.

While Moyes' short tenure was marked by morale-sapping defeats against lesser teams United previously brushed aside, Van Gaal brings an authority earned by stamping his mark on some of the world's biggest clubs.

"It was always a wish for me to work in the Premier League," the Dutchman said in a United statement after a signing a three-year contract with the 20-time English champions.

"To work as a manager for Manchester United, the biggest club in the world, makes me very proud.

"I have managed in games at Old Trafford before and know what an incredible arena Old Trafford is and how passionate and knowledgeable the fans are. This club has big ambitions; I too have big ambitions. Together I'm sure we will make history."

While Moyes arrived at Old Trafford without a major trophy to his name, Van Gaal, who will step down from his role as Netherlands coach after the forthcoming World Cup, comes with real European pedigree.

Making his name as a manager at Ajax, he led the Dutch club to three Eredivisie titles, the UEFA Cup and the Champions League.

The 62-year-old enjoyed further success at Barcelona -- winning back-to-back La Liga titles -- while another Eredivisie title followed at AZ Alkmaar, before he claimed a German league-and-cup double at Bayern Munich.

Van Gaal will be expected to take United back to the summit of English football after the club slipped from winning the 2012-13 Premier League title by a margin of 11 points to missing out on Champions League qualification this term, for the first time since 1995.

"In Louis van Gaal, we have secured the services of one of the outstanding managers in the game today," declared United chief executive Ed Woodward. "He has achieved many things in his career to date and Old Trafford provides him with a fitting stage on which to write new chapters in the Manchester United story."

In his bid to restore the club to its former glories, Van Gaal has retained Ryan Giggs as his assistant manager.

The Welshman is a veteran of over two decades at United, winning 13 Premier League titles and two Champions League crowns in 963 appearances, and took over as manager for the final four games of the 2013-14 season after Moyes was dismissed.

"I am thrilled to have the chance to serve as assistant manager," the 40-year-old said Monday, before announcing his retirement from playing. "Louis van Gaal is a world-class coach and I know I will learn a lot about coaching from being able to observe and contribute at such close quarters.

"Manchester United has been a huge part of my life and I'm delighted to be able to continue that relationship in such a key role.

"Today is a new chapter filled with many emotions -- immense pride, sadness, but most of all, excitement towards the future. United fans I hope will share and echo my belief that the club, the management and owners, are doing everything they can to return this great club to where it belongs, and I hope to be there every step of the way."

Despite Van Gaal's impressive track record, his appointment is potentially risky. Former Germany international Mehmet Scholl, who worked with the Dutchman during their time together at Bayern, warned United players not to expect an easy ride.

"He's very strict and severe. So the players just have the chance to follow him or they are out, and he takes the next players," Scholl recently told UK newspaper The Guardian.

"(Players) are not computers. Sometimes the brain is full. And he still wants (you) to learn, to learn, to learn, high level, every day. Is it annoying? No. It's exhausting. They lose power. That's what happened at Bayern Munich."

Although Van Gaal impressed during his first stint in charge at Barcelona -- between 1997-2000 -- he lasted less than a year in the job upon his return in 2002, with a string of bad results proving to be his downfall.

Did David Moyes deserve to be sacked?

"If you treat your people bad, they remember," Manchester City chief executive Ferran Soriano, who worked alongside the Dutchman at the Camp Nou, told Britain's Daily Telegraph.

"One day you make an error and they kill you. I've seen this in many clubs. Louis van Gaal has been a very good coach in many clubs but his style is very difficult. The same thing happened to him in Barcelona as in Bayern Munich.

"He is very tough, people don't like him, but he wins. And one day you don't win -- and when you don't win, everybody that is angry with you will come back to you and try to kill you.

"In the movies this works, in real life it doesn't."

Van Gaal, who had been linked with Tottenham Hotspur until the United job became available, will be given a large transfer budget as he attempts to bring success back to the club.

The likes of Bayern midfielder Toni Kroos and Southampton's England World Cup defender Luke Shaw have been linked with moves to Manchester.