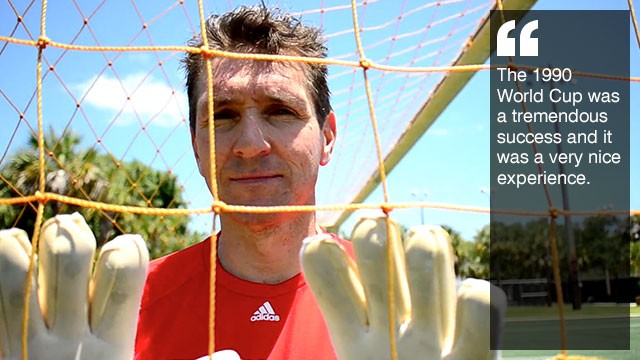 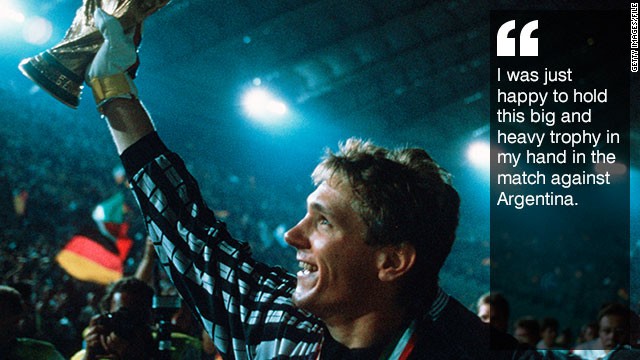 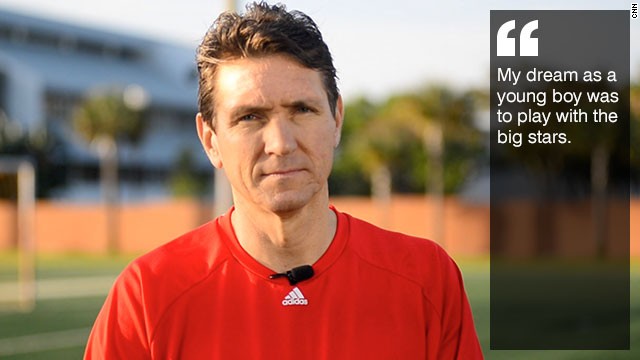 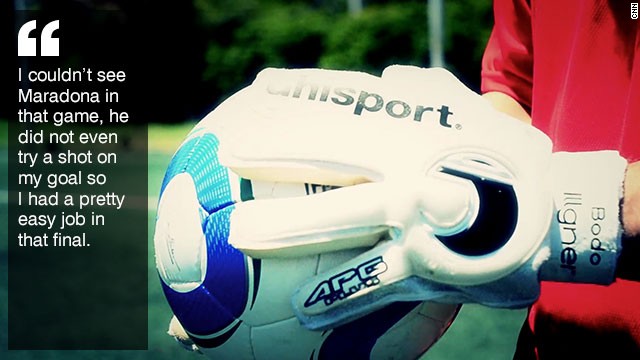 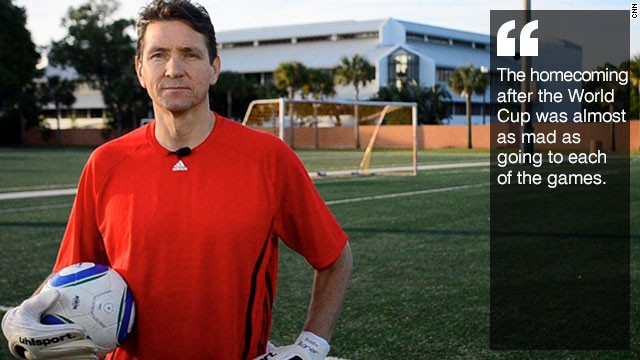 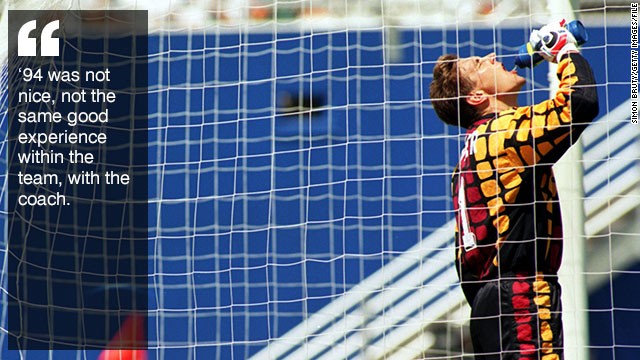 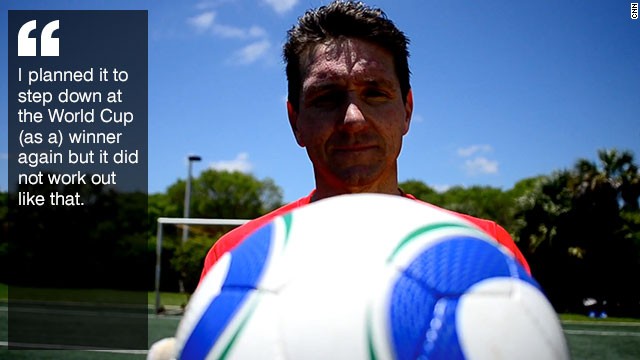 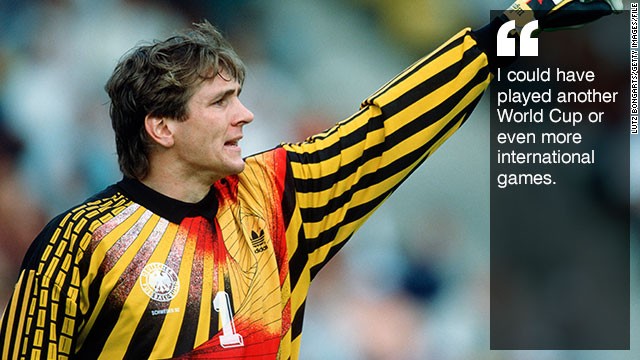 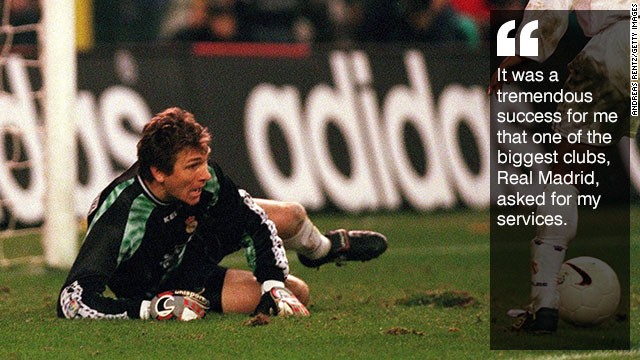 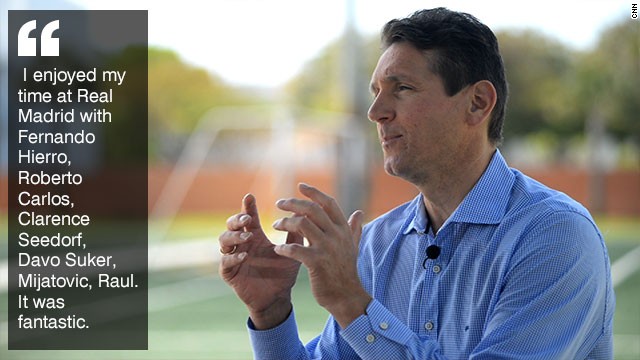 (CNN) -- His first act as a teenage professional goalkeeper was to pick the ball out of the back of the net.

But it would not take long before the football world was in the palm of Bodo Illgner's hands.

"I was a baby in the goal," Illgner tells CNN's Human to Hero series of his heroics for West Germany at the 1990 World Cup in Italy. "The goalkeeper usually joins the national team at the mid-twenties, the late twenties, even over the 30s maybe.

"I was very, very lucky to have the confidence of Franz Beckenbauer our coach in 1990."

He more than justified Beckenbauer's belief in him as he famously denied England in a semifinal penalty shootout and then became the first goalie to keep a clean sheet in a World Cup final as the Germans beat defending champion Argentina 1-0.

Captain of that victorious team was Lothar Matthaus -- the player who had fired a penalty past Illgner earlier when the 18-year-old came on as a substitute for Cologne in a Bundesliga clash with titleholder Bayern Munich.

The man he replaced that day in February 1986, Toni Schumacher, was twice a losing World Cup finalist for West Germany -- but Illgner would not suffer such a fate.

After waltzing through the group stages of Italia '90, West Germany would see off the Netherlands, Czechoslovakia and England before marching on to the final at the Stadio Olimpico in Rome for a rematch of the 1986 final.

"It was tremendous, a tremendous World Cup," Illgner recalls. "Italy is close to Germany, so you can imagine that thousands of German fans were .all along the streets when we were going to the games.

"Everything worked out perfectly, the atmosphere in the team was great, motivation was great, the coach did well. We had our freedom and we played very well and won it."

Legends were made that famous night in the Italian capital, but IIlgner had already etched his name into national folklore.

A crucial penalty save from England's Stuart Pearce in the semis helped the Germans to advance to a third successive final in the most tense circumstances.

He then recorded the first final shutout since the tournament began in 1930 as a late Andreas Brehme penalty gave West Germany a third title overall.

"I was just happy that we won this game," IIlgner says modestly when reminded of his exploits. "I couldn't care less if it was 4, 3, 2, 1, nothing. I was just happy to hold this big and heavy trophy in my hand in the match against Argentina."

In fact, IIlgner recalls the final as one of his easiest games in the tournament. That's despite Argentina's side containing Diego Maradona, arguably one of the finest players to ever play the game and a key figure in the 1986 tournament.

"I couldn't see Maradona in that game, he did not even try a shot on my goal so I had a pretty easy job in that final," IIlgner says.

"I think I only touched it once or twice. We did a great defensive job of course but Diego Maradona was the danger for us.

"Lucky for us we had Guido Buchwald, who played one to one against him."

Germany had witnessed the fall of the Berlin Wall less than a year before the 1990 final and the reunited country still had a feelgood factor from those momentous events. When the players returned they were swamped by well-wishers as they paraded through the streets of Frankfurt.

"The homecoming after the World Cup was almost as mad as going to each of the games," IIlgner recalls. "I don't know how many million people were around the streets but it was exceptional."

IIlgner had watched on television the last time West Germany won the World Cup back in 1974 but he never thought he would be able to replicate the feats of legends like Beckenbauer, Gerd Muller and Bertie Vogts.

Four years later, however, the World Cup of USA '94 would bring IIlgner and his countrymen back down to earth.

A unified Germany team, featuring many of the 1990 side as well as those who would have previously qualified for East Germany, suffered a surprise 2-1 quarterfinal defeat at the hands of Bulgaria.

"The 1990 World Cup was a tremendous success and it was a very nice experience (but) '94 was not nice, not the same good experience within the team, with the coach," Illgner says.

"So I was very frustrated about how things were going during this World Cup.

"Everybody was more motivated to play against us. Our team spirit was not the same as four years previous and we had a different coach by then. Players got older, they were at the end of their career."

The defeat marked IIlgner's 54th and last appearance for Germany as he retired from international football after the tournament aged just 27.

"I planned it to step down at the World Cup (as a) winner again but it did not work out like that," he says.

"Maybe the biggest regret I have was to resign right after we lost in '94 against Bulgaria. Now I think I should have waited a little bit longer and think it over. I could have played another World Cup or even more international games."

Germany would bounce back to win the European Championships in England two years later but IIlgner's focus was elsewhere by then.

Named European goalkeeper of the year in 1991 and Germany's top stopper from 1989-93, he had become hot property.

As his compatriots walked the famous Wembley steps to lift the Henri Delaunay trophy, IIlgner was in Spain finalizing a move from Cologne to Real Madrid -- a club more known for spending big on the world's best attacking players.

"It was a tremendous success for me that one of the biggest clubs, Real Madrid, asked for my services -- and I was more than happy to sign for them," he says.

"They came out of a very poor season, signed a lot of new players, brought in a new coach Fabio Capello, who wanted me as his goalkeeper and we had a fantastic season.

"I had to fight hard with two Spanish goalkeepers to get in there, but in the end it was worth it."

At Cologne, IIlgner had come close to winning titles but his side never finished higher than second in the league. His debut season ended with Cologne just avoiding relegation.

In Madrid, winning was the only option. Second was equivalent to being the first loser.

With IIlgner in their ranks, Los Blancos would win La Liga twice, as well as two European Champions League crowns (although the keeper was an unused substitute for the second of these wins in 2001).

"I enjoyed my time at Real Madrid with Fernando Hierro, Roberto Carlos, Clarence Seedorf, Davo Suker, Mijatovic, Raul. It was fantastic," he says.

"I enjoyed to be with these players with this quality and nice, nice lads ... I enjoyed it very much."

Today, IIlgner is still involved in football although he has turned his hand to commentary at North American broadcaster beIN Sports.

Forthright in his opinions and insightful with his analysis, the transition from the pitch to the television screen has been a seamless one.

IIlgner regularly covers the Spanish, Italian and German leagues for his employer and he feels more qualified than most to offer predictions on who to watch out for in the 2014 World Cup in Brazil starting next month.

"In Brazil, they expect to win this World Cup and that can weigh on your shoulders of course. We have to see how they deal with it, but i think they are the big favorites," he says.

"There's another three or four favorites. Germany of course, Spain of course as a World Cup winner (in 2010) and the dark horse might be Belgium or Chile.

"Argentina, not to forget with Messi, they have a very good strikers upfront and are very dangerous as well."

Unsurprisingly, Illgner will be rooting for his compatriots.

"We've seen a very solid and very good German team since Germany played at home at the World Cup in the 2006," he says. "Fantastic football, different to the football that we are used to in Germany.

"This generation needs a title and I think it's the last chance. Some players are getting old now. Philipp Lahm is one of the best players on the right-back side, he's 30.

"Thomas Muller is one of the most talented players and he's still young, he can do more World Cups, but Bastian Schweinsteiger for example, in midfield, 30 almost as well.

"This team is getting old -- if they want to get a title it needs to be this season."

If Joachim Low's German team of 2014 are looking for advice, they could do worse than taking a tip or two from this World Cup winner behind the mike.

Read: Leading Nigeria out of darkness