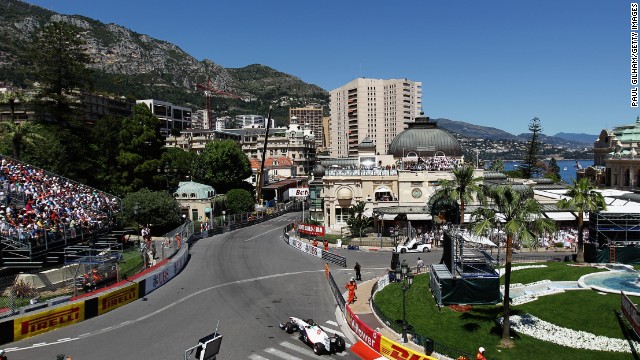 The Monaco Grand Prix has been held in the picturesque principality of Monte Carlo on the French Riviera since 1929 and the race remains the jewel in Formula One's crown. 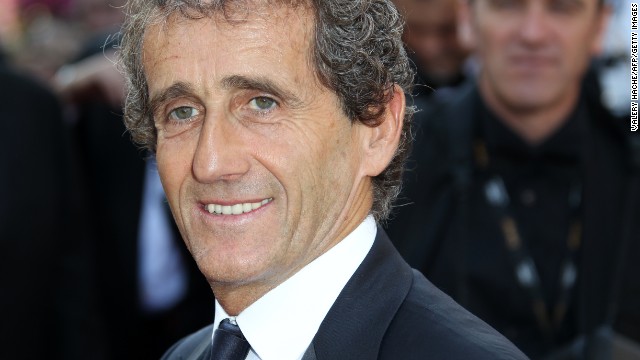 Four-time world champion Alain Prost believes only a Monaco victory can make you into a legendary Formula One driver. 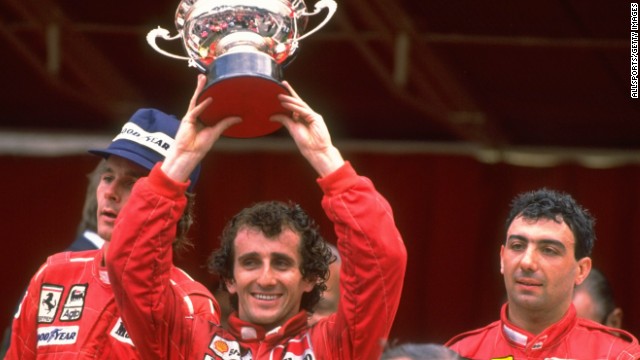 Prost won the Monaco Grand Prix four times -- the last of which came in 1988. 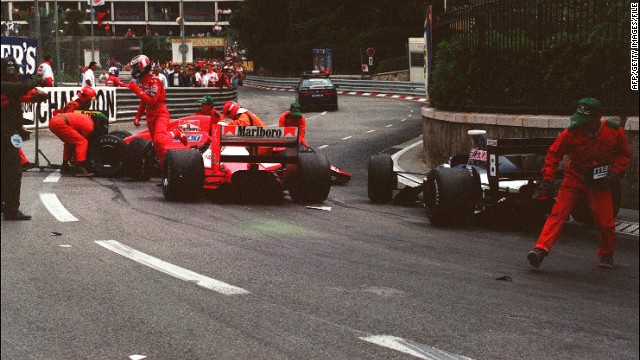 The French driver experienced the highs and lows of racing at Monaco -- this 1990 incident, while with Ferrari, was one of three retirements he suffered in 13 starts. 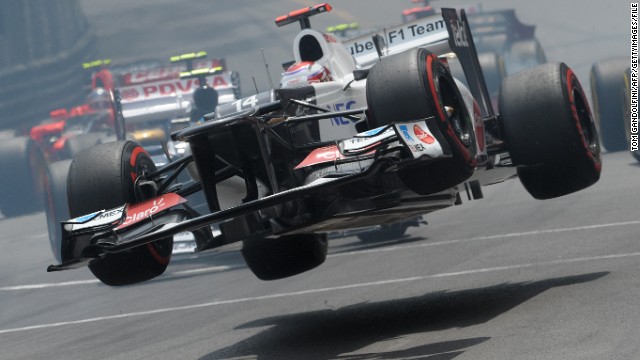 Prost says some of the corners are so tight, it feels like you are driving a plane, not an F1 car. Here Kamui Kobayashi's Sauber takes off during the 2012 race. Monaco is a magnet for celebrities such as Hollywood actor Will Smith and pop star Nicole Scherzinger, pictured with Formula One boss Bernie Ecclestone in 2012. 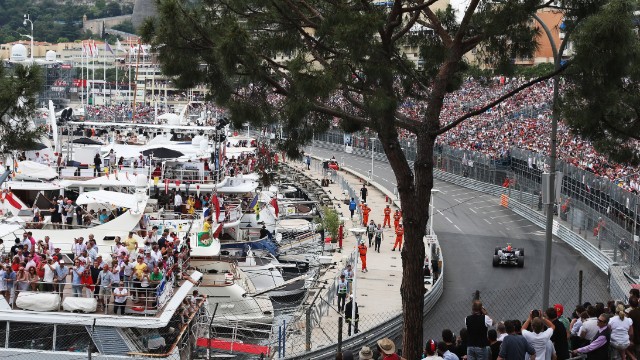 The tiny city-state will welcome 200,000 fans over the grand prix weekend, with many of them watching from yachts in the harbor. 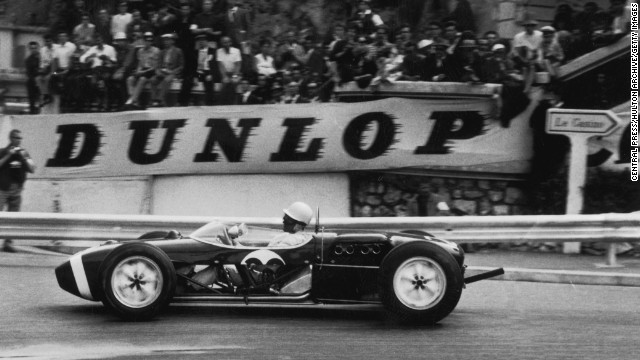 Monaco's street circuit is relatively unchanged since Formula One cars began racing there in 1950. Stirling Moss says his 1961 victory, shown here, was the best race of his career. 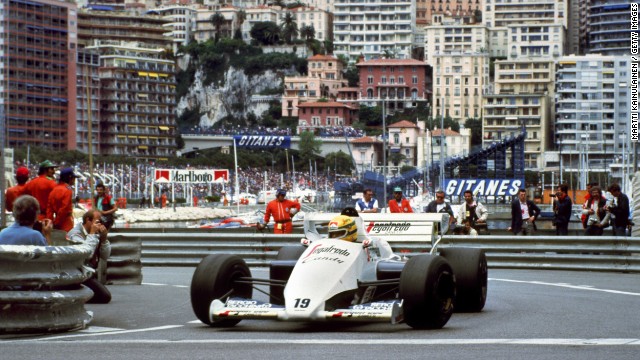 (CNN) -- To be a champion you must win a title -- but to become a Formula One legend you must win races at Monaco.

"You can be a great driver without winning at Monaco but it is much better to have won here."

Only three men have triumphed in the principality more often than Prost -- his great rival Ayrton Senna took six victories, while Graham Hill and Michael Schumacher claimed five each.

"If you want to be considered as a great, very often you'll hear people say, 'Oh, I know Alain is a world champion but he won at Monaco four times and Ayrton has won there six times,' says the Frenchman, who ended his career with four world titles compared to the late Brazilian's three.

"You always operate within your parameters. I won the French Grand Prix six times and nobody cares about that," he adds.

"It is always more important to win at Monaco."

Home to some of the world's richest and most famous celebrities -- including many sports stars -- because of its favorable tax laws, Monaco plays host to some of the biggest names in the racing world.

The picturesque city-state on the French Riviera has been transformed this week to accommodate 200,000 fans all aiming to grab a view of the cars from the grandstands, hotel balconies and terraces -- as well as the luxury yachts moored in the harbor.

The course, which is overseen by the Automobile Club de Monaco, requires two months to complete and calls on the expertise of 200 construction workers to build 1,100 tonnes of grandstands, 900 tonnes of pit garages and 21 miles of safety barriers.

Prost still revels in the excitement that's generated on race weekend -- something he says is unparalleled across the racing world.

"First of all it's a race, but it's the atmosphere of the whole thing which I enjoy," the 59-year-old says.

"My parents live close to Monaco, in Cannes, and I have a lot of friends near too.

"There's also the atmosphere, which feels very French but it's more than that, it's the only grand prix where you feel something special."

How safe is a Monaco F1 race?

While the circuit at Monaco is one of the most challenging, it is the demanding nature of life off the track during race week which can often prove more difficult.

Drivers are expected to entertain sponsors, attend parties and galas, while there is the usual pre-race hype to deal with too.

It is a week unlike any other in the racing calendar. Practice sessions start a day earlier on Thursday, meaning a gap -- often filled by duties to sponsors -- before Saturday's qualifying session.

"There are a lot of parties at Monaco and it's not the sort of place where you can say, 'OK, tonight, I am going to go to sleep and wake up late,' " Prost reveals.

"You need to stay in good shape and keep your concentration.

"You can have some parties, but you are always meeting people during the four days in the lead up to the race.

Nelson Piquet, a three-time world champion who had more retirements at Monaco than podium finishes, described negotiating the tricky street circuit as "like riding a bicycle around your living room."

But Prost, who won there three years in a row from 1984-86, remembers it more fondly.

"Every year, you arrive here, you go into your car, you go up to the Casino, you try to accelerate and every time, every year I had the same feeling: 'How am I going to be able to drive this, the car looks so big for the corner and the speed and the power...?'

"And slowly you get used to it, in only a few laps, but it looks like you have a plane, you have a jet. But you change slowly and you start to dominate the car, and that is when you have the biggest pleasure. The only time I had this 100% control was '86."

That year he started from pole position, set the fastest lap during the race and headed off his McLaren teammate Keke Rosberg -- father of current Mercedes star and Monaco resident Nico -- while Senna was third.

But it is his failure to claim victory in 1993 which still nags at Prost -- a race where he was hit with a stop-go penalty to deny him yet another success.

Having again started from pole position, he was too quick out of the blocks and then, after serving his punishment, he stalled and dropped to 22nd place.

Despite the circuit being notoriously difficult for overtaking, Prost made his way up the field but had to settle for fourth as Senna triumphed for McLaren in what would be his final race at Monaco -- he died the following year at Imola driving for Prost's former team Williams.

It was also Prost's final outing at Monaco -- he decided to retire at the end of that season.

"I will never forget that one," he recalls. "That was my win, you know.

"I would say that I rate all my victories here the same, as they are a part of history."

Interactive: Experience the thrills of Monaco