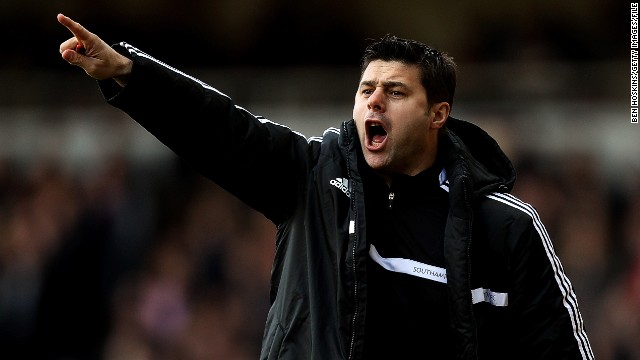 The London club have appointed the Argentinean after raiding fellow English Premier League outfit Southampton for his services.

Pochettino guided Saints to their highest ever EPL finish last season and was credited with bringing through a talented clutch of youngsters at the club.

The 42-year-old now has the task of guiding Spurs into the lucrative European Champions League, knowing failure could cost him his job.

In an statement on the club's official website, Pochettino said: "This is a club with tremendous history and prestige and I am honored to have been given this opportunity to be its Head Coach.

"There is an abundance of top-class talent at the club and I am looking forward to starting work with the squad.

"Tottenham Hotspur has a huge following across the world and I have great admiration for the passion the fans show for this team.

"We are determined to give the supporters the kind of attacking football and success that we are all looking to achieve."

Pochettino took over at Southampton in January 2013 with the club struggling at the foot of the Premier League and guided them to safety.

This season he took them to their highest ever league placing -- eighth -- and helped develop a core of home grown talent including Adam Lallana and Luke Shaw, who are both expected to go to the World Cup with England.

But expectations are much higher at Spurs, with a succession of managers being fired for not securing the top four berth that offers entry to Europe's money spinning Champions League.

Harry Redknapp is the only manager in recent times to qualify for the competition, leading Spurs to the quarterfinals in 2010/11 before he was sacked in 2012.

Andre Villas-Boas, the former Chelsea manager, finished fifth in his first season before being relieved of his duties in December last year with the club languishing in seventh.

Tim Sherwood -- a former player at the club -- took over as caretaker but was sacked at the end of the season after Spurs finished sixth.

Levy said in the club's statement: "In Mauricio I believe we have a Head Coach who, with his high energy, attacking football, will embrace the style of play we associate with our club.

"He has a proven ability to develop each player as an individual, whilst building great team spirit and a winning mentality. We have a talented squad that Mauricio is excited to be coaching next season."

In a statement on the club's official website announcing Pochettino's resignation, chairman Ralph Krueger said: "We will be looking for a manager that shares our values, our principles and our philosophy.

"A manager who can continue to grow the First Team and build on our strong foundation -- a foundation led by an ambitious vision and plan that continues to build on our world-class academy, our amazing 129-year heritage and our excellent staff, and rewards our loyal and passionate fan base."