A firm but simple handshake had sent a message to the world on Monday that the heads of India and Pakistan were ready to talk.

And talk they did on Tuesday, in a meeting at Hyderabad House, a former palace in New Delhi, that lasted almost 50 minutes.

Briefing reporters after the encounter, Sharif described the meeting as "good and constructive" and "held in warm and cordial atmosphere."

Sharif said both countries should work to overcome their mutual mistrust, and that regional peace and stability were key to achieving their common goals of development.

Sharif said he intended "pick up the threads" of the Lahore Declaration, referring to a pledge both countries made in 1999 to cooperate more closely to ease tensions.

The Pakistani premier also said that accusations and counter-accusations are not productive -- a comment on the regular political back-and-forth between their two nations.

"We agreed that our meeting should be a historic opportunity for both our countries," he said.

He added that he was "very pleased" to be in New Delhi at Modi's invitation, having flown in for his counterpart's inauguration on Monday.

Sharif was part of the biggest gathering of South Asian leaders ever assembled for an Indian prime minister's swearing-in.

In a series of tweets posted after Monday's inauguration ceremony, Modi revealed the two had exchanged remarks. 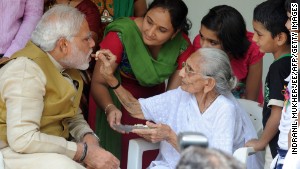 The image said to have moved Sharif's mother: Modi's mother feeding him sweets on May 16, 2014.

Sharif "shared some very emotional things," Modi said, before recounting a rather strange story Sharif told him about how his mother became emotional while watching television images of Modi's own mother offering him sweets.

In an interview with Indian television station NDTV, Sharif was reported to have described his attendance at Modi's inauguration as a "great opportunity, a great moment."

"He said that this strong mandate frees up leaders on both sides ... to actually turn a new page in the history of India and Pakistan," NDTV's Barkha Dutt said.

The visuals touched both Nawaz Sharif ji & his Mother. He told me that after seeing the visuals his Mother got very emotional.

Relations have been strained between the two countries since 1947, the year the Asian subcontinent partitioned into Islamic Pakistan and Hindu-majority India as it gained independence from British rule.

In the decades since, they have fought a number of wars and clashed over Kashmir, an 86,000 square-mile region to the north.

Efforts to agree a peace deal took a major step back in 2008 when Pakistani militants attacked the Indian city of Mumbai, killing more than 160 people in a series of co-ordinated assaults.

In 2011, the two countries agreed to return to the negotiating table and since then relations have continued to thaw.

He held talks with then Indian Prime Minister Manmohan Singh, who emerged from the 30-minute meeting saying both nations were willing to find "practical and pragmatic" solutions to their differences. Zardari described the talks as "fruitful."

Sharif is said to have expressed the same optimism for the countries' relationship in his interview with NDTV on Monday.

"Both governments have a strong mandate. This could help in turning a new page in our relations," Sharif told NDTV. "We should remove fears, mistrust and misgivings about each other. Both countries should rid the region of instability and security that has plagued us for decades."

Modi's meeting with Sharif is one of a series of bilateral meetings scheduled with regional leaders on his first day as India's 15th prime minister.