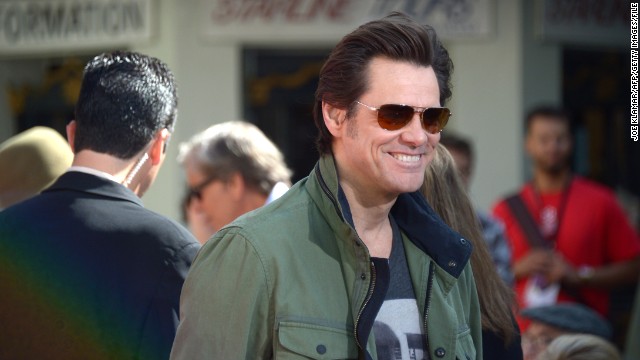 Comedian Jim Carrey got personal during a commencement speech in Iowa.
STORY HIGHLIGHTS

(CNN) -- Leave it to Jim Carrey to turn a commencement speech into a show and tell.

The actor brought along some of his artwork to share Saturday with the graduates of the Maharishi University of Management in Fairfield, Iowa. And the actor offered the Class of 2014 inspiring words about life and their future.

The funnyman got serious when discussing his father and the things he learned from him.

"My father could have been a great comedian, but he didn't believe that that was possible for him, and so he made a conservative choice," Carrey said. "Instead he got a safe job as an accountant."

All of that fell apart, the actor said, when his dad lost his job and the family fell on hard times.

"I learned many great lessons from my father, not the least of which, was that you can fail at what you don't want, so you might as well take a chance on doing what you love," he said.

The speech received a rousing reaction from the graduating students of the institution, which according to its website is a place where "all students and faculty ... practice the Transcendental Meditation® technique."

Carrey jokingly thanked, "The trustees, the administrators, the faculty of MUM for creating an institution worthy of Maharishi's ideals of education as well as enabling the students through transcendental meditation and ancient vedic knowledge to slack off twice a day for an hour and a half."

He also received an honorary degree of doctor of fine arts during the ceremony.