(CNN) -- I never actually caught a glimpse of the Tooth Fairy when I was young, but she was definitely real and in cahoots with my mom. This, due to the fact that I never woke up to find a Nintendo.

It seems, however, that the Tooth Fairy had plenty of small bills.

Which, to be fair, seems the appropriate amount of prize money for literally doing nothing, save for having things fall from your head.

And at least she was reliable. Teeth came out. Money came in.

Since then, I've only allowed my adult self to believe in the mythical Receding Hairline Fairy, who comes in during the night and inspects your shower drain for treasure.

So far, however, despite plenty of offerings, she's failed to leave any cash under my pillow.

Not even a Nintendo.

Even so, I still believe.

But now there's another fairy out there who is both very real and very reliable, and, for many adults, very welcome.

Basically, her job is to swoop into town and deliver free marijuana to people on the street. And she recently shared her generosity with Seattle's Capitol Hill neighborhood.

It was there over Memorial Day weekend that she posted around 50 fliers on street poles that read: "These are tough times. Take this WEED and keep your spirits high."

Taped to each flier was a tiny little nugget of weed.

The postings were signed with the Twitter handle @danksyappleweed, which, for those of you paying attention, is a clever play on the name Johnny Appleseed.

Though, their missions in life appear to be rather different. 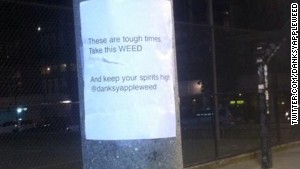 Somebody already got to this one, but here's another Weed Fairy flier posted in Seattle.

Johnny Appleseed is a beloved American treasure who, at the turn of the 18th century, introduced apple trees to many parts of the United States.

Danksy Appleweed, on the other hand, helps inspire overstressed businessmen to go home, eat a bag of Cheetos and watch Pink Floyd's Live at Pompeii.

Which is equally as important.

Danksy's real name is Yeni Sleidi, and, according to her website, she is a 23-year-old resident of Brooklyn's Park Slope neighborhood. But she decided to spread her love on a recent visit to Washington state, where marijuana is legal.

Sleidi told Q13 Fox that, "It's definitely easy to get it here in Seattle, but not everyone has the money."

And she's done it in the past. Several months ago she said she provided free weed to people in New York, where the feedback was positive.

Which is why, now, she's much more open about who she is and what she does. The @danksyappleweed handle even links to her personal Twitter account, @sleidi_yeni.

Of course, some people are concerned that the weed might fall into the wrong hands, like people under the age of 21. Or, say, your parents, who like to try things now that they're older.

"Diane, I found this on the street today. I believe it's legal marijuana."

"Maybe it's a suppository. Get me some olive oil." 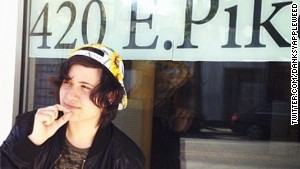 Yeni Sleidi (AKA: The Weed Fairy) poses for a goodbye picture from Seattle.

But Sleidi says that she's careful about where her little wings take her, explaining, "I try to leave it in areas where I know the majority of the people are of age."

And the police don't seem overly concerned either, telling Q13 Fox that it's not a top priority.

Sadly, though, for people in Seattle hoping to find some free heady nuggets, Danksy tweeted on Friday that her short visit to the Emerald City had come to an end, posting her message with a photo taken at what appears to be 420 E. Pike Street.

420, of course, is a term the kids associate with marijuana, and a bit of modern slang that your parents will promptly mangle.