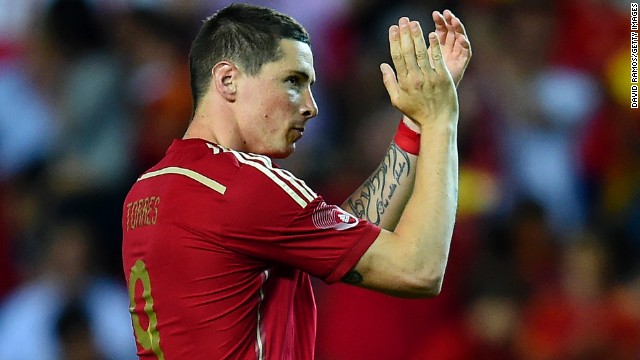 Fernando Torres applauds the crowd after being substituted in Spain's 2-0 win over Bolivia in Sevilla.
STORY HIGHLIGHTS

(CNN) -- Fernando Torres was rewarded for his goal in Spain's 2-0 friendly win over Bolivia with a place in the 23-man squad for its defense of the World Cup in Brazil.

The Chelsea striker got the nod from coach Vicente Del Bosque Saturday despite an indifferent season for his club side Chelsea.

Atletico Madrid's Diego Costa, who is struggling with a hamstring injury and club teammate David Villa are also included as strikers.

But there was disappointment for another trio of front men, Manchester City pair Jesus Navas and Alvaro Negredo and Fernando Llorente of Juventus.

Midfielder Ander Iturraspe, and defenders Alberto Moreno and Dani Carvajal have also been excluded from the provisional 30 named by Del Bosque.

But the spotlight was on Torres -- who has scored just 20 goals in 110 games since his $84 million move to Chelsea.

His appearance against Bolivia Friday night in Sevilla was his first appearance for the world champions since the Confederation Cup nearly a year ago.

The Chelsea striker put in a generally lively performance at the Ramon Sanchez Pizjuan Stadium and after Bayern Munich's Javi Martinez was pulled down in the penalty area, Torres scored from the spot on 51 minutes.

But moments later Torres showed the other side of his game, his lack of confidence in front of goal.

Put through by man of the match Andres Iniesta, Torres attempted a chipped finish over the head of Bolivian goalkeeper Romel Quininez, but made a horrible hash of it, sending it high and wide.

Torres held his head in his hands, but the miss did not prove significant and Iniesta wrapped up the victory with a stunning goal six minutes from time.

In a pointer to his final selection, Del Bosque gave a positive verdict on Torres, who has played in the last two World Cups and scored 37 goals for his country.

"We have a lot of confidence in him and that's why he is here," Del Bosque told gathered reporters after the win.

"We are pleased with how he worked tonight," he added.

Spain opens its defense of the World Cup with a tough match against the Netherlands on June 13, a repeat of the 2010 final in which Iniesta scored the only goal of the game.

Meanwhile, England got its preparations for Brazil off to a good start with a comfortable 3-0 win over Peru at Wembley.

Daniel Sturridge scored a stunning first half opener for Roy Hodgson's men == the third goal in his last five starts for England for the Liverpool star.

Central defenders Gary Cahill and Phil Jagielka were on target after the break after well-delivered corners troubled the South American visitors..

Bosnia-Herzegovina was also boosted by a 2-1 success against fellow finalists Ivory Coast.

Its talisman Edin Dzeko grabbed goals in either half before Didier Drogba pulled one back for the Ivorians in the final minute.