Editor's note: Mike Chinoy was CNN's Beijing Bureau Chief in 1989. He is currently a Senior Fellow at the U.S.-China Institute at the University of Southern California's Annenberg School for Communication and Journalism. He has written and narrated "Assignment: China" a 10-part documentary film series on the history of American journalists in China from the 1940s to the present day. The above clip is from the episode on the 1989 Tiananmen Square coverage, released April 2014. The opinions expressed in this commentary are solely those of the author.

(CNN) -- It was 2:30 a.m. on the morning of June 4, 1989. From a balcony of the Beijing Hotel, I looked down Chang'an Avenue towards Tiananmen Square a few hundred meters away. Red tracer bullets whizzed through the air. The crackle of gunfire echoed through the humid Beijing night.

I could see armored vehicles of the People's Liberation Army moving just in front of the famous portrait of Chairman Mao hanging above the vast square. 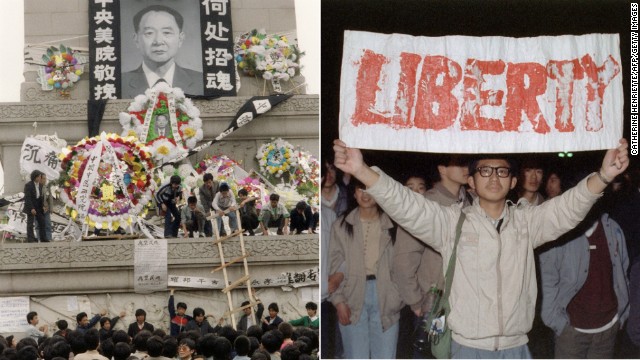 Ousted General Secretary of the Communist Party, Hu Yaobang, dies at age 73 on April 15, 1989. The next day, thousands of students gather at Tiananmen Square to mourn him -- Hu had become a symbol of reform for the student movement. A week later thousands more marched to Tiananmen Square -- the start of an occupation that would end in a tragic showdown. 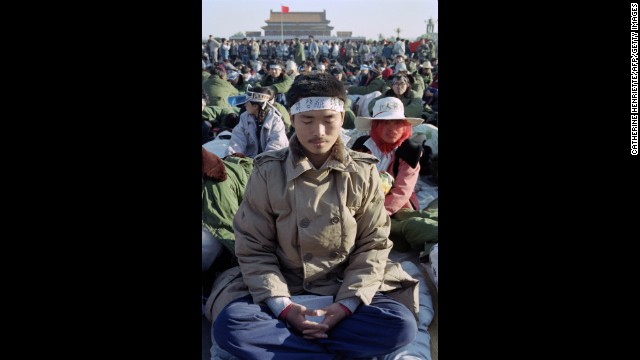 May 13, 1989, student demonstrations at Tiananmen Square escalate into a hunger strike with thousands taking part and calling for democratic reforms. 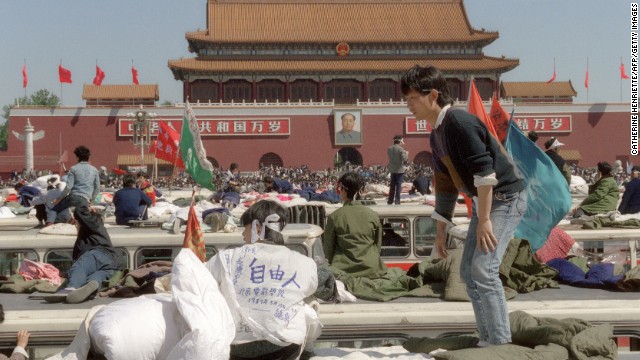 Student hunger strikers camp out on top of buses parked at Tiananmen Square. 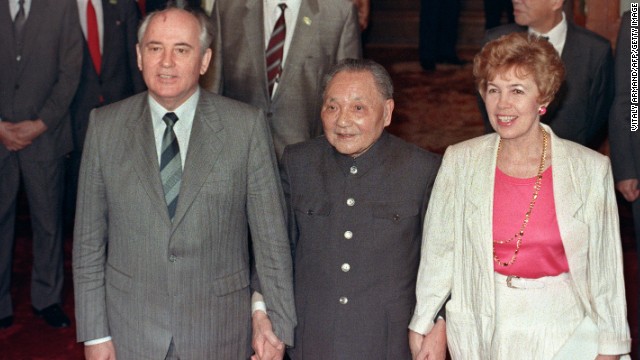 May 16, 1989, then Chinese President Deng Xiaoping (center) takes then Soviet President Mikhail Gorbachev and his wife Raisa by the hand at the Great Hall of the People. Gorbachev's visit coincided with the student hunger strikes, forcing the official reception to be moved from Tiananmen Square to the airport -- embarrassing for the Chinese leadership. 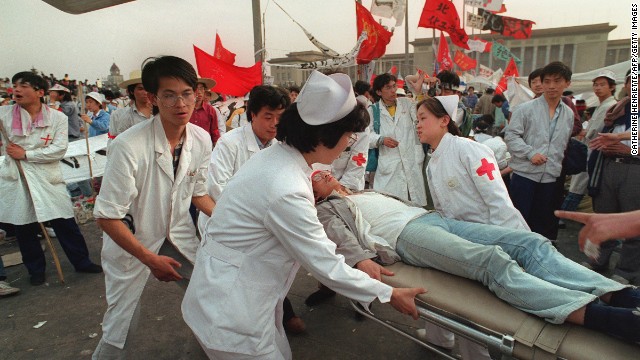 May 17, 1989: Five days in and the hunger strike begins to take its toll on students. Paramedics evacuate ailing protestors from the square. 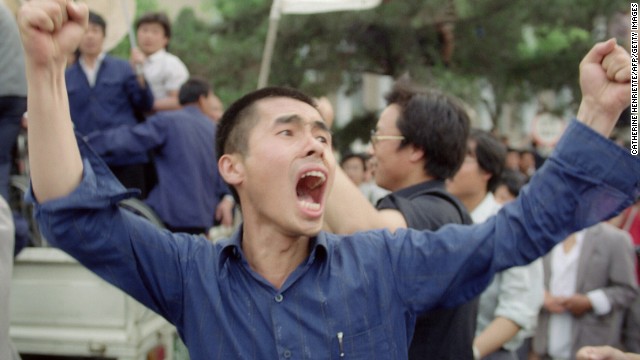 May 18, 1989 and Gorbachev has been in China for three days, witnessing street protests for each of those days. At the height of demonstrations, a million people were marching through Beijing. 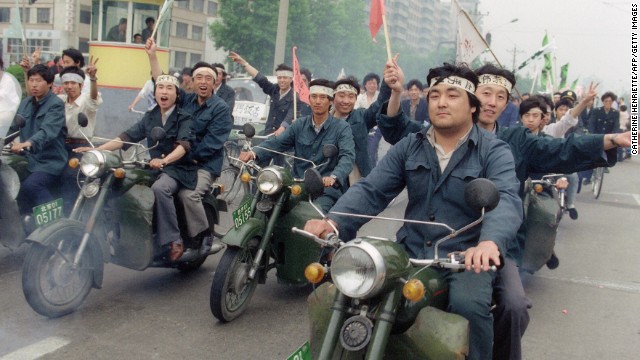 May 18, 1989, Chinese workers parade on motorbikes in support of student hunger strikers. 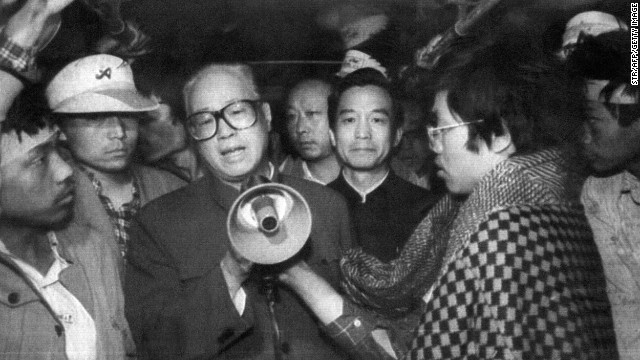 May 19, 1989, the sixth day of hunger strikes. Communist Party General Secretary Zhao Ziyang arrives at Tiananmen Square to address the students. He begins his now-famous speech by saying: "Students, we came too late. We are sorry." The next day, Premiere Li Peng declares martial law in parts of Beijing. 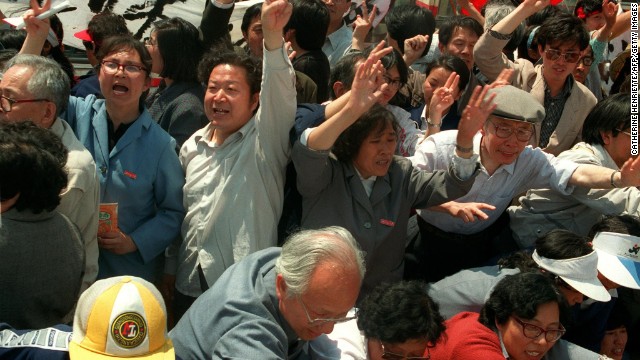 May 20, 1989, teachers from Beijing Normal University arrive at Tiananmen Square by the truckload to support their students after martial law was declared. 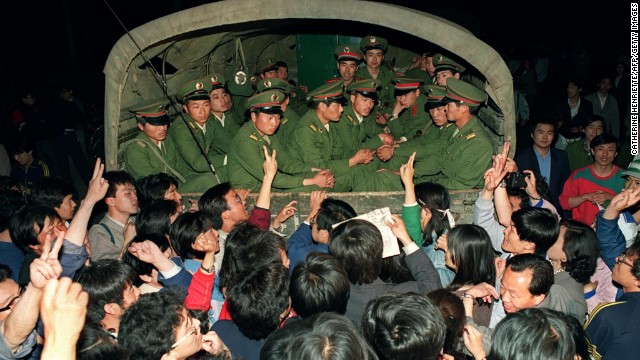 May 20, 1989, pro-democracy demonstrators raise their fists and flash the victory sign while stopping a military truck filled with soldiers on its way to Tiananmen Square. 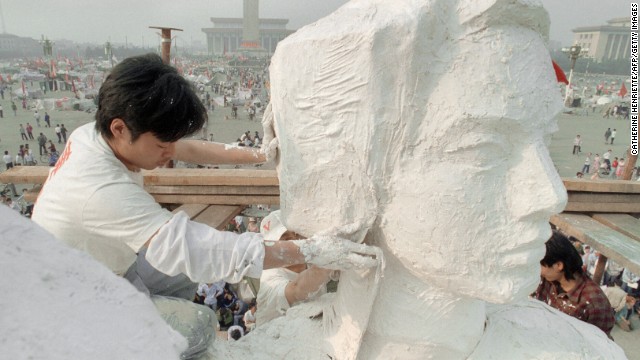 May 30, 1989, students from the Central Academy of Fine Arts create a 10-meter-tall statue of the Goddess of Democracy to boost morale amongst student protestors in Tiananmen Square. Erected in just four days, the statue was unveiled in front of the Monument to the People's Heroes. 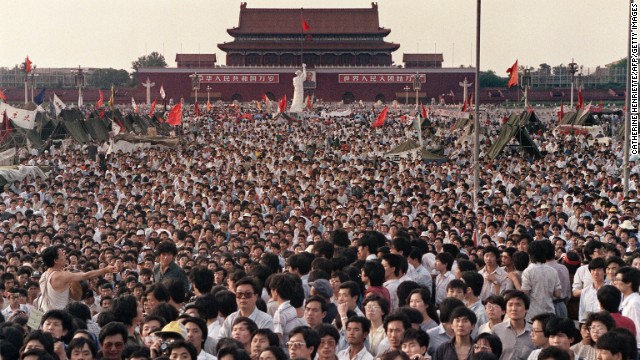 This photo was taken on June 2, 1989, showing hundreds of thousands gathered around the Goddess of Democracy. 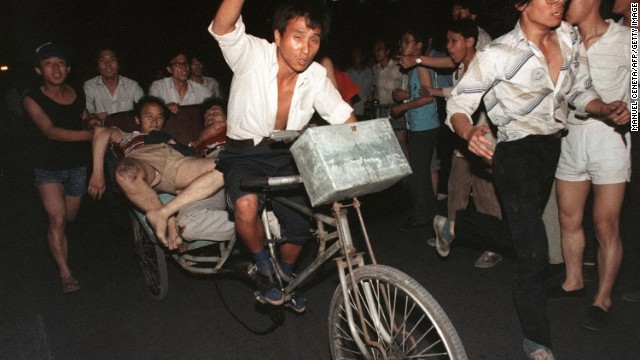 On the night of June 3 and into the early hours of June 4, armed troops and tanks moved in on students and other civilians in the areas around Tiananmen Square, opening fire on the crowds. 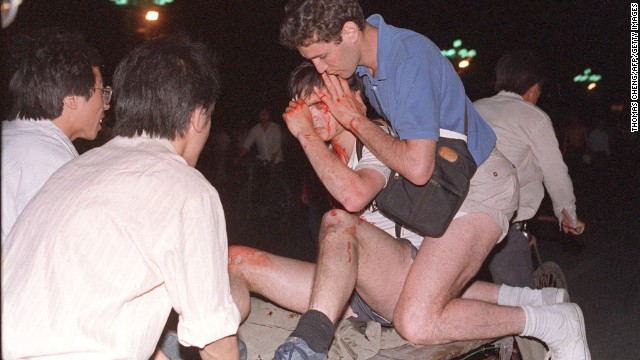 June 4, 1989, journalists covering the crackdown were caught in the line of fire. 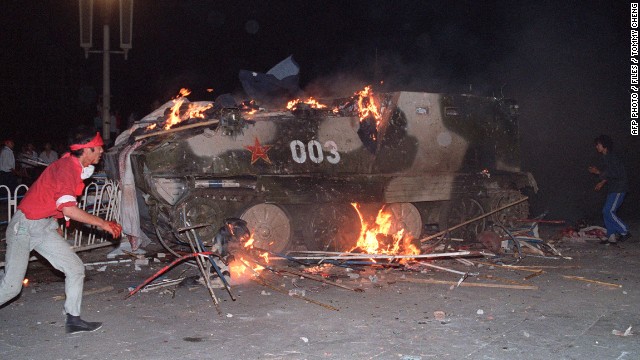 June 4, 1989, students set fire to tanks. An official death toll has not been released but witnesses and human rights groups say hundreds were killed in the clash. 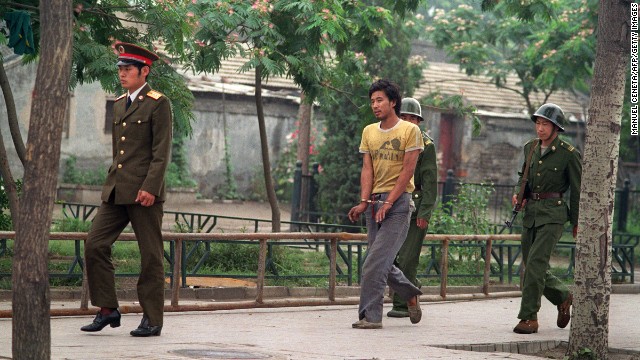 In the weeks following June 4, activists who were directly or indirectly involved in the pro-democracy demonstrations were arrested. 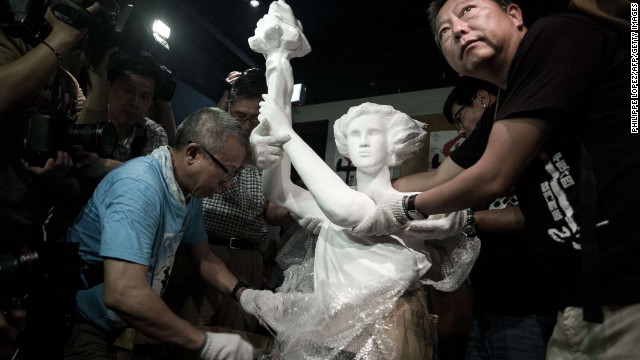 Today, Hong Kong is the only Chinese territory where commemoration of the June 4 crackdown is allowed. Here, pro-democracy legislator Lee Cheuk-yan (left) unwraps a replica of the Goddess of Democracy at Hong Kong's June 4 Museum that opened on April 24, 2014. 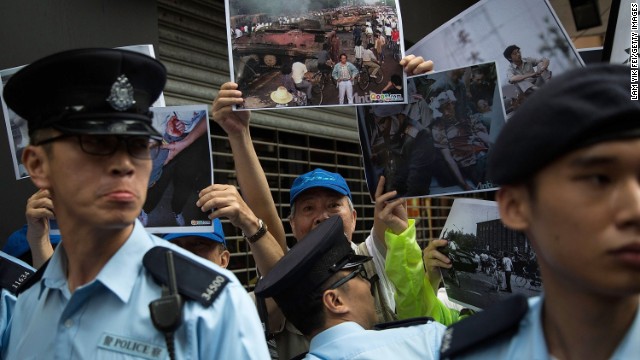 Timeline: The Tiananmen Square crackdown of 1989

Below me crowds gathered, surged forward, and then broke and dispersed as soldiers opened fire at them. Several people were hit. I watched as others loaded the dead and wounded onto flatbed bicycle carts.

As the drama unfolded, my colleagues and I reported it live on CNN over a scratchy phone line to transfixed TV audiences around the world.

The events that night were a turning point for China, as well as a watershed moment in the history of the media.

A girl wounded during the military crackdown in Beijing on June 4, 1989, is carried away on a bicycle cart.

Weeks of student-led protests had become the largest movement for political reform in the history of the People's Republic. The military crackdown I covered had far-reaching consequences, not only for China's development but also for its relations with the rest of the world.

The protests generated unparalleled international coverage, and became a defining moment in the Information Age. It was the first time a popular uprising in an authoritarian state was broadcast live across the globe.

According to Bernard Shaw, who anchored CNN's live round-the-clock coverage from Beijing for much of the crisis: "You could say that that was the beginning of the 'CNN effect'" -- the idea, which became widespread after Tiananmen Square, that the immediacy of live TV news available 24 hours a day played a crucial role in influencing the behavior of key players during major crises.

The images from that time -- the Goddess of Democracy, the man in front of the tank -- became enduring symbols of popular resistance to injustice.

In the United States, the coverage of Tiananmen redefined the relationship between the press, public opinion, and foreign policy-making, and brought an end to the romance in Sino-American relations that had begun with Richard Nixon's trip in 1972.

To this day, the event and the images continue to shape international perceptions of the country.

It was no accident that at a U.S. Congressional hearing on Tiananmen in late May, lawmakers from both parties emphasized how the television coverage from 25 years ago had influenced popular views of China.

Inside China, Tiananmen also continues to exert a profound influence.

The crisis in 1989 led paramount leader Deng Xiaoping to purge liberal officials who had sympathized with the students, and replace them with more conservative figures.

Yet for Deng, a central lesson of Tiananmen was that public confidence in the Chinese Communist Party could only be maintained by continuing the market-oriented economic reforms begun in the 1980s. In the wake of Tiananmen, Deng pushed to revive and accelerate the reform process, triggering a bitter fight with the very conservatives he had relied on to back his decision to crack down in 1989.

In what was his last great political battle, Deng triumphed, and his efforts paved the way for China's emergence as an economic powerhouse.

Yet for the same reason -- ensuring the Party's survival -- Deng also stifled any new moves towards political reform, as did those who followed him.

In particular, fearing that the events of that June could undermine the Party's legitimacy, Beijing has relentlessly sought to erase June 4 from public memory. All public discussion of the crisis is banned. Every Spring, the authorities move against anyone seeking to raise the issue, whether dissidents, lawyers, or relatives of those who died.

The Communist Party in effect offered the Chinese people a bargain: greater economic opportunity and more personal -- as opposed to political -- freedom in return for not challenging the Party's monopoly on power.

Despite pervasive political repression, it is a bargain many Chinese have accepted.

And with the passage of time, the suffocating control of any public discussion, along with stunning economic growth, has meant that for the vast majority of Chinese, the events of 1989 have faded from memory.

The day after the lethal crackdown: Torched tanks cooling in the streets.

An entire generation knows little but the official government version of what occurred. Yet memories of 1989 still haunt the Communist Party. Ensuring that nothing like it occurs again remains a central feature of Beijing's policies on a host of issues.

This can be seen in the exceptionally nervous reactions to the Arab spring and so-called "color revolutions" in parts of the former Soviet Union, the growth of the internal security services, the intense repression in Tibet and Xinjiang, the harsh actions against dissidents like the imprisoned Nobel Peace Prize winner Liu Xiaobo, and the government's management of the thousands of protests over local issues that occur in China every year.

So far, Beijing's approach has generally worked and the Chinese leadership has proved itself to be more skillful and resilient than many in 1989 would have predicted.

However, with the country's economy slowing, social and economic tensions rising, and the Internet and other new forms of communication giving citizens new tools to voice their opinions and generate political pressure, the Communist Party is facing new challenges -- which could give new resonance to the legacy of Tiananmen Square.

Beijing's approach to June 4 therefore remains a paradox. A quarter of a century later, the Communist Party still feels compelled to use all the powers of the state to convince people inside China that nothing worth remembering happened on a date that, outside the country, will be an occasion for reflection and analysis of what remains the gravest crisis the Party has faced since the revolution of 1949.

On the 25th anniversary of the Tiananmen crackdown, Beijing is business as usual, without a hint of the tragic events that took place a quarter of a century ago.
Tiananmen vigil: We will never forget
updated 10:59 AM EDT, Wed June 4, 2014

People in Hong Kong tell CNN why they are attending the Tiananmen vigil and what they want from the Chinese government.
I drove famed protesters to safety
updated 4:20 AM EDT, Wed June 4, 2014

Wang Dan, Chai Ling, and Wu'er Kaixi, the prominent student leaders of the 1989 pro-democracy movement, tell us their thoughts on China's future.
To forget or not to forget? It's a choice
updated 1:44 PM EDT, Wed June 4, 2014

A needle is inside the body of Nobel Peace Prize laureate Liu Xiaobo, traveling along his veins and poking at his organs.
'Tank Man' photographer's other shots
updated 11:42 PM EDT, Mon June 2, 2014

You know his famous "Tank Man" image. But have you seen his other pictures from Tiananmen?
Activist: Why we commemorate
updated 1:09 AM EDT, Tue June 3, 2014

The 'CNN Effect' started with live coverage of the Tiananmen Square crackdown on June 4, 1989. Here's how it happened.
In Hong Kong, demands for democracy
updated 2:09 AM EDT, Mon June 2, 2014

Hong Kongers took the streets to call for democracy, in an prelude to the 25th anniversary of the Tiananmen Square crackdown.
Human rights in China after Tiananmen
updated 8:36 PM EDT, Wed May 28, 2014

A CNN crew covering the June 5, 1989, protests in Beijing records the now iconic footage of a man stopping a tank in Tiananmen Square.
Maimed but not beaten
updated 3:36 AM EDT, Tue June 5, 2012

Fang Zheng, who lost his legs after a tank rolled over him in Tiananmen Square, looks back at the events of 1989.
From a Chinese prison to Wall Street
updated 10:27 AM EDT, Thu July 26, 2012

Tian Hou, who was imprisoned during the Tiananmen Square crackdown two decades ago, talks to Christiane Amanpour about her career in business.
1989: Protest ends in massacre
updated 6:49 AM EDT, Mon June 4, 2012

CNN Photojournalist Jonathan Schaer looks back at his coverage of the Tiananmen Square protests and the famous tank standoff.