Oligarch: How culture can heal the East-West rift

Editor's note: Nina dos Santos is a news anchor and correspondent based in London. She is the host of CNN International's new business show, The Business View, which airs weekdays at 12pm CET. Follow her on Twitter and tell us, using the hashtag #cnnbusinessview, can soft diplomacy work?

London (CNN) -- While Ukraine's fight for freedom gets bloodier by the day and Russia faces the West's cold shoulder, in the elegant surroundings of London's Somerset House, one oligarch is using art to get his message across.

"This work is called 'Widows,' for one simple reason," says Andrei Filatov as he points towards a picture of five elderly ladies looking forlorn. "Because instead of an icon [on the wall] there is Karl Marx."

And in cottages where the father of socialism has taken the Holy Mother's place, he explains, "this tells us the women depicted have probably lost their husbands in the war."

For almost half a century the widows' empty eyes have stared out over Moscow's Tretyakov Gallery, caught behind the iron curtain as a new, "cold" war came and went. 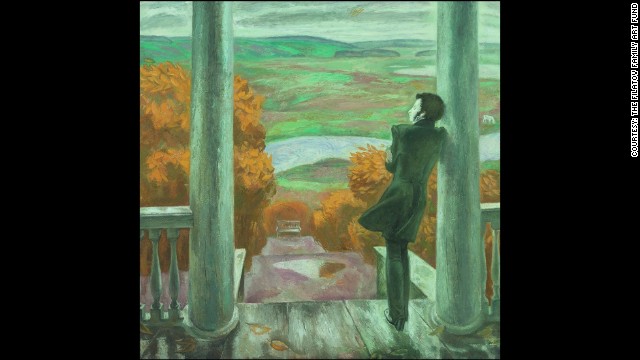 Autumn Rain is one of Viktor Pokov's works based on the life and death of Russian poet and author Pushkin. This image, the exhibitors say, was sketched after Popkov's son dressed in a 19th century outfit and leaned against the door. 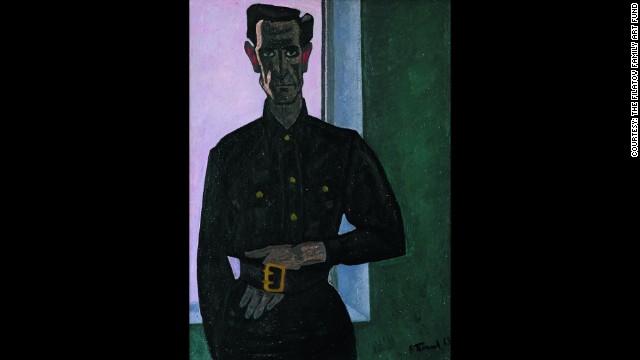 This painting shows Popkov's "Chekist" -- from the Cheka, or secret police -- in a Russian military uniform that had been worn by Stalin and other military figures, the exhibitors say. 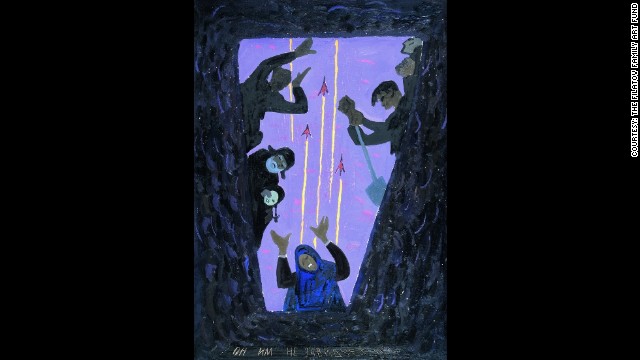 This 1962 oil on cardboard contrasts "triumphant state imagery of powerful war planes with a vision of personal grief," the exhibitors note. It reflects Popkov's frequent bouts of depression, which can be seen in his work. This was painted the same year as the Cuban Missile Crisis. 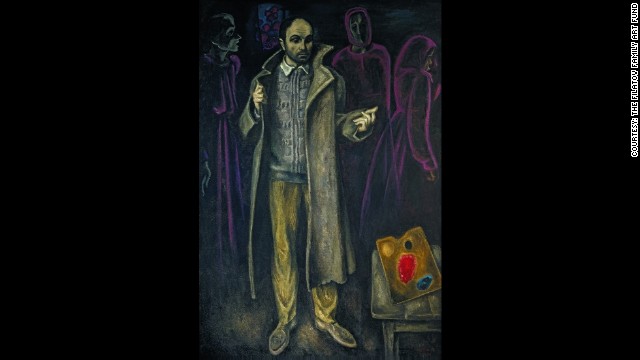 This, the exhibitors say, is one of Popkov's "most emotionally powerful canvases" dealing with the question of whether young men deserve the sacrifice of their fathers. Popkov lost his father during World War II. 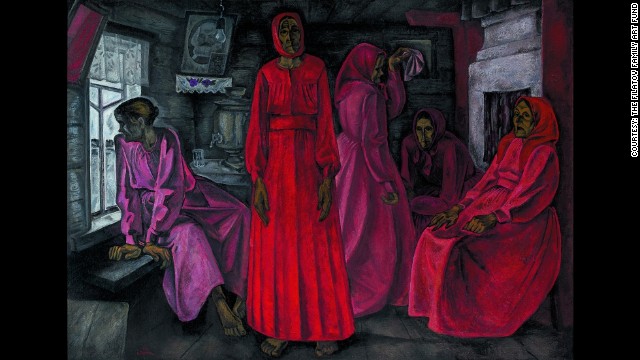 Memories. Widows, from 1966, is from Popkov's paintings on the women in Mezen, Russia. According to the exhibitors, the portrait of Karl Marx can be seen as showing an "unquestioning allegiance to state ideology." 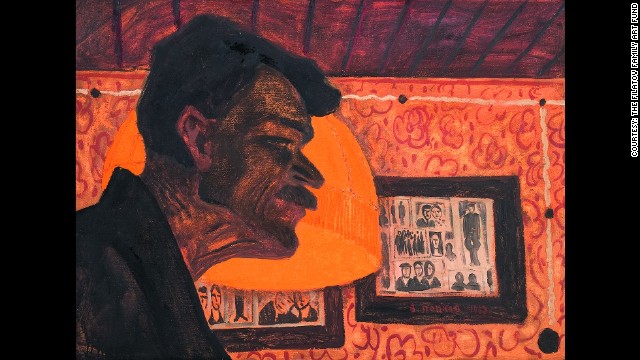 This oil on cardboard was painted in 1963, and is one from the Filatov family's collection. 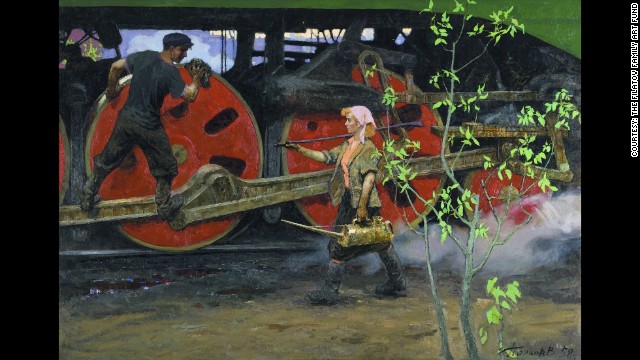 Spring in the Depot, painted in 1958, is regarded as one of Popkov's "finest and most lyrical" works, according to the exhibitors, with a sense of "controlled optimism." 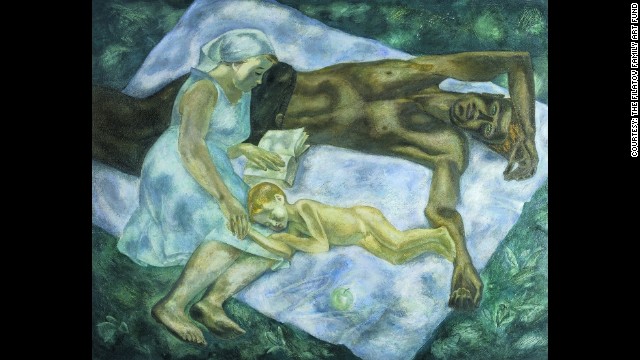 This 1969 image looks at the family. Popkov's relationship with this wife improved after a failed suicide attempt in 1966, and the exhibitors note this could illustrate the "positive shift." 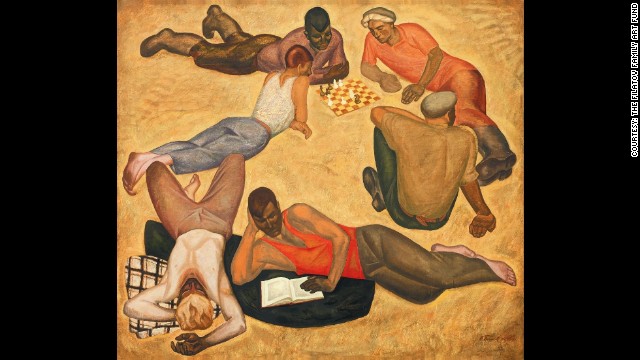 The Brigade Resting, an oil on canvas from 1962 -- 1965, is similar to work done by Russian painter Andrei Rublev in that it uses a "textured monochromatic background," the exhibitors note, with a stylized depiction of drapery folds. 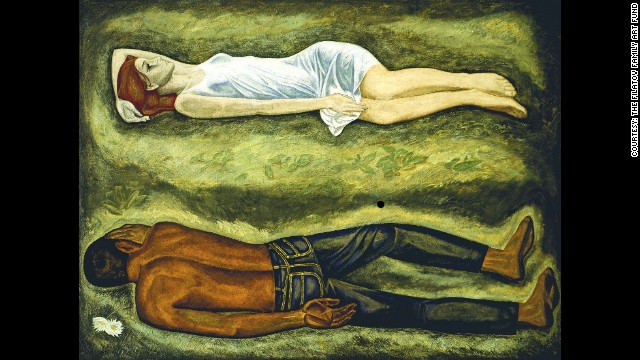 This painting, a prize-winner at the 1967 Biennale in Paris, was painted with references to the Middle Ages, according to Popkov. The exhibitions also note its similarity to the work of Gauguin, saying Popkov was "always finding new and diverse influence whilst never losing his own voice." 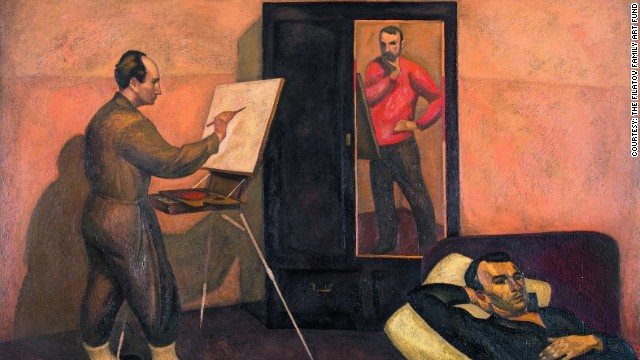 This work from Popkov can divide opinion, the exhibitors say. Some argue it can be seen as a triple self portrait, others disagree.
Autumn Rain. Pushkin.
Chekist
He Does Not Envy Them
Father's Overcoat
Memories, Widows
Portrait of a Man With a Lampshade
Spring in the Depot
Summer. July
The Brigade Resting
The Couple
Three Artists
HIDE CAPTION
<<
<

The Soviet-era art of Viktor Popkov

But now, thanks to the 42-year-old's passion for paintings, they have been given a new perspective, on display for the first time in London alongside 39 other canvasses by Viktor Popkov, in a special exhibition dedicated to the Soviet-era artist.

The exhibition includes pieces from Filatov's own collection, and brings together works from museums across Russia's biggest cities, recording a post-Stalin age when heroic peasants and propaganda had begun to give way to themes of industrial optimism and the bloom of youth.

"I was born in the Soviet Union and I loved that country," says Filatov.

"So it seems right to showcase the good things that it created because there wasn't the opportunity to do so before. As a period, it was somewhat misunderstood."

With an estimated $1 billion fortune this Forbes rich list stalwart has clearly done well out of his country's break with communism.

Yet he is nostalgic about the past and, having amassed a sizeable collection of Soviet masterpieces, Filatov hopes to one day found his own museum in London and promote a "better understanding" of his home nation.

"I want to show the creative work of the Russian people, so that there is more love for Russia," he says. "That is why I want to build a museum here."

Filatov isn't new to the world of soft diplomacy.

As President of the Russian Chess Federation, he has overseen international tournaments at the Louvre in Paris and personally funded the restoration of the tomb of the Russian chess legend Alexander Alekhine in the same city.

Cultural exchanges, he says, can be key ways of keeping the dialogue going.

"For people to understand each other better they must communicate ... through the exchange of culture, through exhibitions, through theaters, through music and ballet.

"I hope this exhibition will improve the understanding and relations between different peoples and countries. That is its meaning."

For Filatov, just like many Ukrainian-born Russians, the concept of "home" is more complicated than it first seems.

Born in Kryvyi Rih in Ukraine, the co-owner of the ports and roads firm N-Trans describes himself as Russian but still has relatives in Ukraine.

The sooner there is an understanding by the European countries and the U.S., the faster there will be logical, sensible and constructive relations
Andrei Filatov

And like many practical business people with a sizeable stake in this complex region, Filatov leaves the artwork to make the bold political statements, saying only he considers sanctions imposed by the EU and the U.S., "a big mistake."

According to Filatov, "the sooner there is an understanding by the European countries and the U.S., the faster there will be logical, sensible and constructive relations."

Putting on a large Russian art show in London at a time of heightened animosity towards his country is an ambitious project. Even talking about art, at a time of deadly skirmishes in Ukraine, may seem flippant but Filatov does have another motive for wanting to host the show: to cater for the British capital's sizeable Russian expat population.

"Walking around here I discovered there is not one large collection of Russian art," he says.

"Russian culture is not presented here yet hundreds of thousands of people from Russia live here. Russian children go to school here and they are losing their connection to their own culture."

"Viktor Popkov: The Genius of The Russian Soul" was organized last year as part of 2014's somewhat overshadowed UK-Russia Year well before Ukraine's crisis pitted the countries against each other.