Reinventing libraries for 'hanging out, messing around and geeking out' 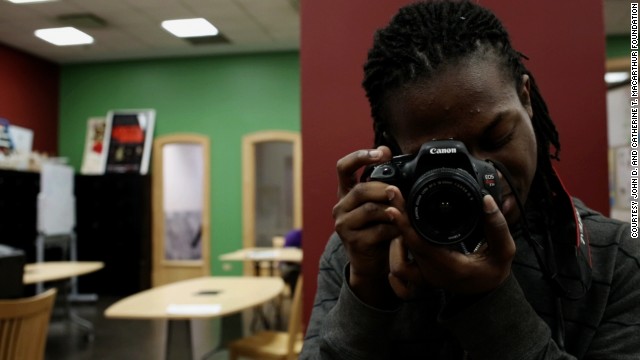 At the Chicago Public Library's YOUMedia centers, teens can explore their passions. Through mentoring and workshops, teens can experiment with a wide variety of tools and resources, from books to video editing software and SLR cameras. The first YOUMedia Center opened in Chicago's Harold Washington Library Center in 2009 and has expanded to four more Chicago Public Library branches. 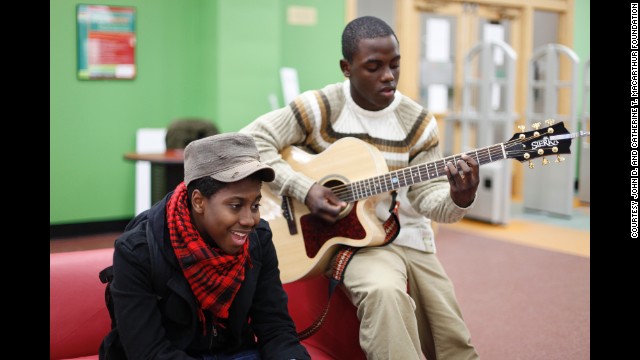 YOUmedia has a studio recording space where teens can use instruments and learn to mix tracks. 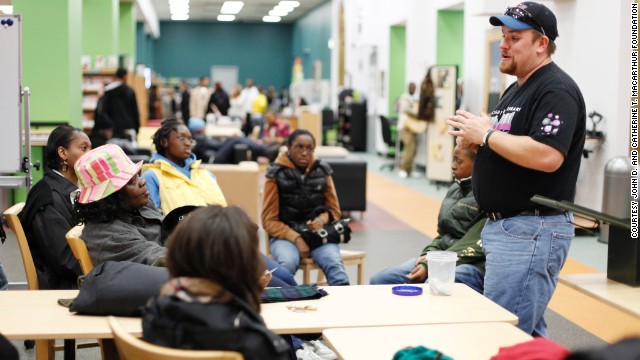 YOUmedia often collaborates with authors, artists and speakers from various fields to enrich its workshops. In this instance, an expert in geo-caching explains the use of GPS for treasure hunting. 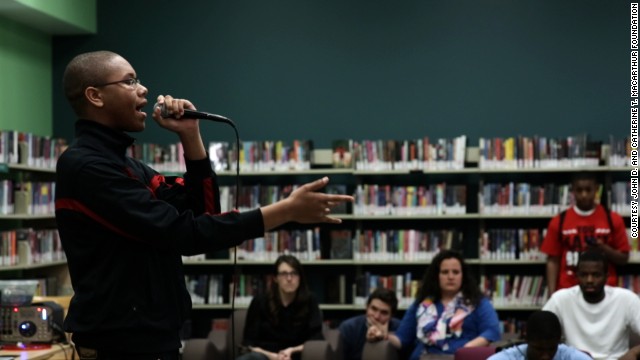 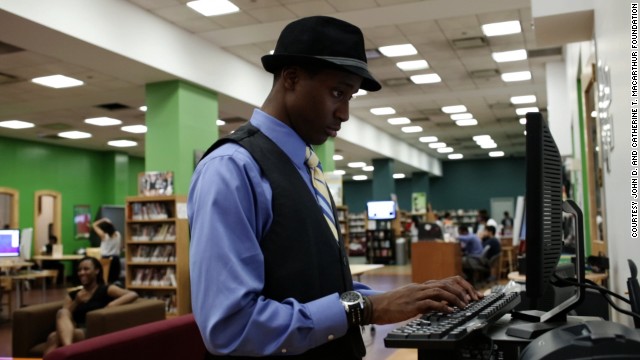 Teens can also use the center's computers to do homework or dive deep into any topic of interest. 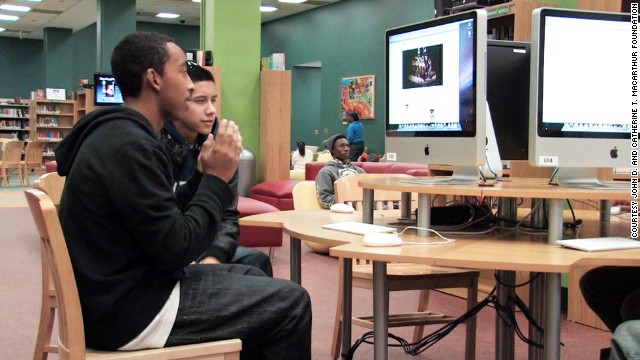 (CNN) -- On the third floor of the Nashville Public Library downtown branch, past the hushed rows of monochrome bookshelves and solid wood furniture, a door leads to a place where adult patrons are not welcome.

Instead of silence, laughter and chatter fills the room. Colorful bookshelves line the wall, holding graphic novels, manga comics and self-help books on bullying and applying to college. Teens sit in circles talking, reading and doing homework. Others play video games on their phones or on gaming consoles attached to televisions.

The staff takes special pride in its mentor-led activities, offered in partnerships with various community organizations: a spoken word workshop, a video game program and a makerspace, or workshop, where teens create birdcages, duct tape wallets and other art projects.

It might be a library, but for 18-year-old Alexis Woodward, the atmosphere is more like a "family reunion," she said.

"It's always packed until it closes. Everybody goes to the library after school," said Woodward, who began participating in the spoken word program when she was 14.

Collections, staff and space dedicated to teens have existed in libraries for years. Now, libraries are shifting those resources to developing learning spaces where teens can create content instead of consume it.

Research has shown the widespread positive impacts of afterschool programs on academic achievement and social behavior, especially in low-income communities. The need for spaces that engage teens becomes even greater during summer break, when teens have more free time, said Elyse Adler with the Nashville Public Library.

"We want to provide teens with spaces to explore learning and digital media that they don't have access to in their homes or at school," she said.

The Nashville Public Library Foundation is one of 24 sites that received $1.2 million in grants from the Institute of Museum and Library Services and the John D. and Catherine T. MacArthur Foundation to build innovative learning labs for teens that promote "creativity, critical thinking and hands-on learning." After years of planning and collaborating, some sites are opening this year in Nashville, Minnesota, Ohio and elsewhere.

A small lab opened in April in the Nashville Public Library's Green Hills location, and construction is under way on its main downtown branch: a 2,500-square-foot teen learning lab in the main branch. The space will house a recording booth, editing bays and a bigger makerspace with a 3-D printer and squishy circuits, among other goodies requested by teens involved in the planning (and naming) of "Studio NPL."

The new space will enable teens who follow Woodward in the spoken word program to do even more than she did, from using editing software to animating poetry to recording songs.

"It's going to be amazing," said Woodward, who tested some of the technology and made proposals before aging out of the teen center this year.

"Teens will have more chances to experiment."

Focusing on learning labs, or digital media centers, is just one way libraries are evolving from passive gatekeepers of information to community centers of active learning, said Barbara Stripling, president of the American Library Association. Teens need these kinds of places to find their voices, Stripling said.

"Libraries are trying to give teens opportunities to work outside of the bounds of the school curriculum to explore their interests," she said.

The shift also comes at a moment when educators and researchers are rethinking how to use digital media to inspire lifelong learning, said Amy Eshleman with the Urban Libraries Council, who is helping support implementation of the 24 learning labs.

The guiding principles of the learning labs are based on anthropologist Mimi Ito's research suggesting teens thrive in learning environments where "hanging out, messing around and geeking out" is encouraged. Also known as connected learning, it's an approach that encourages teens to use new media to burrow deep into their passions and find ways to turn them into educational and economic opportunities.

"It's all about engaging them in a space where they can be with peers, unpack their interests and get better at things they care about, and help them find a path from their passions to opportunities in the real world," Eshleman said.

The spaces are inspired by Chicago's YOUMedia center in the Harold Washington Library, which has become a model of connected learning. About 60 to 80 teens use the space each day to use produce music, videos, podcasts or to experiment in photography, creative writing, 3-D printing, or video game design, to name just a few activities.

Each activity leads to another, said library associate and YOUMedia mentor Marcus Lumpkin. When the YOULit magazine team attended Chicago Zine Fest in March, they met independent publishers, traded copies of their magazines for others, and documented the experience through various media. Library of Games, a website and weekly podcast all about video games, started with a group of teens playing video games at the center.

The skills acquired in each activity build on each other, he said. Teens learn to build and maintain websites and create content, he said. They also learn to think critically and work in teams, he said.

"We're working to validate their interests. While schools are fighting to get students interested in science, technology, education arts and mathematics, I think the library is doing a great job in allowing teens to dive into those fields through their individual interests."

The staff is proud of how they've managed to harness individual passions to make the most of students' time at the YOUMedia center, said Andrea Saenz with the Chicago Public Library. The next step is finding more direct paths to education and employment opportunities.

"We're trying to the embody notion of connected learning that's about making sure kids make a clear connection between what they're doing in the space and careers and opportunities to participate in civic life," she said.

Teens have been at the core of Nashville Public Library's institutional evolution since the early 2000s, said Elyse Adler, associate director for community engagement. That's when five new branches were built, including the main branch downtown, with spaces dedicated to teens.

They brought in teens to help out around the library and serve on an advisory committee. When the teens recommended partnering with community organizations for programming, they partnered with spoken word education program Southern Word. They also suggested training for adult librarians on best practices for engaging young patrons, little things like smiling and being friendly, or talking to them as they would adults.

It was all part of a "cultural shift" that redefined how the library served teens, Adler said.

"Teens need more opportunities for learning outside of school, and libraries are uniquely positioned to fill that need in being free and open to everyone in the community," she said.

Alexis Woodward began visiting the main branch for Southern Word in ninth grade and became a regular. Through open mics, international food days and poetry slams, she met other teens from "bad neighborhoods" trying to avoid trouble. She improved her writing, self-confidence and public speaking, and built leadership skills that led her to become a Southern Word mentor. Now, she's bound for Southern Illinois University in the fall with substantial financial assistance.

"It was a very positive thing to do after school instead of going out and getting in trouble," she said. "I've seen friends get arrested and hurt; some have died, and I felt like I would've been in that in that world if I hadn't been in the library working toward being a better poet and a better writer."

The library also partnered with Vanderbilt University to start Nashville Building Blocks, a program that uses Minecraft and other video games to explore architecture. Instructor Ty Hollet worked with the non-profit Nashville Civic Designer Center to brainstorm building projects based on real infrastructure needs in Nashville, from housing and commercial development to train stations, for teens to work on.

Participant Jack Fox, 14, already played Minecraft at home with friends, but through the library program, he learned a new use for it. Through building residential communities and a bridge, he also learned more about Nashville 's geography.

"Now, I have this whole visual map in my head of the city that I didn't have before," he said.

When teens learn something new through activities they enjoy -- like playing video games -- the lesson is just as valuable as a test or piece of homework, Hollett said. And, it'll probably be more meaningful in the long term.

"Through experiences teens have with digital media in and out of school, we're recognizing that learning doesn't just take place in classroom. It takes place in libraries, museums and homes," he said.

A teen's school project became much more after the accidental death of her father.
You're never too young to be CEO
updated 1:06 PM EST, Wed December 10, 2014

Around the country, children are turning their big, creative ideas into money-making businesses.
Does your child need a digital diet?
updated 5:04 PM EDT, Mon May 5, 2014

Many kids spend too much time with screens -- and it's not good for them, Susan Linn writes.
Do students need to sit still?
updated 1:24 PM EST, Wed December 10, 2014

Some schools and teachers no longer believe that sitting still and quiet are the best ways for kids to learn.
Teen's idea could save millions
updated 3:30 AM EDT, Sat March 29, 2014

A teen's school science fair experiment became a big idea -- one that could save millions.
What kids can learn from failure
updated 5:11 PM EDT, Mon March 10, 2014

Some schools are freeing up time for students' passion projects -- and teaching them how to learn from failure.
What, how and why the SAT is changing
updated 10:34 AM EST, Thu March 6, 2014

The 2016 SAT college exam will undergo sweeping changes on what's tested, how it's scored and how students can prepare.
RIP SAT words? Not quite
updated 10:19 AM EDT, Mon March 17, 2014

SAT creators say they're cutting obscure, easy-to-forget vocabulary words from the test. But are they really going away?
Study abroad for job hunting edge
updated 10:56 AM EDT, Fri April 4, 2014

What do employers want? Someone who has seen the world.