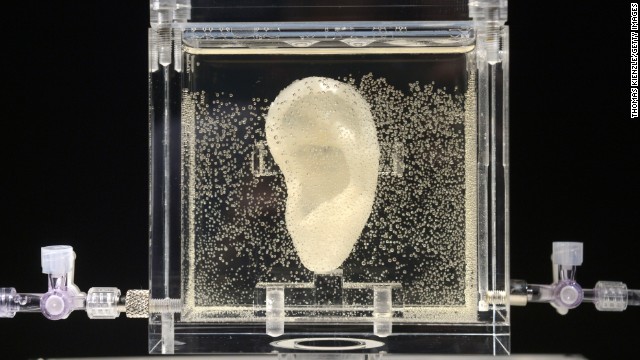 So long as we have a very loose definition of what we are willing to consider van Gogh's ear, this is van Gogh's ear.
STORY HIGHLIGHTS

But theoretically, I suppose I could grow one with a 3-D science printer and scare children in the park.

"Robots are taking all your future jobs! You won't be better off than your parents! Earth is becoming unlivable! Mwahaha!"

Mind you, the ear would be back at home. These missions are unrelated.

But, yes, though it might seem crazy, we now know that this is possible, because a German artist named Diemut Strebe has successfully "regrown" Vincent van Gogh's legendary severed ear.

It's a piece she calls "Sugababe," and is on display at the ZKM Karlsruhe Museum, where you can actually speak into van Gogh's ear with a special microphone, magically confessing all your secrets to the deceased artist.

It's been 126 years since the famous Dutch painter supposedly hacked off part of his ear, but new technology and a little creative thinking managed to bring it back to life.

Here's how it worked:

When Strebe came up with her idea, she originally wanted to procure some DNA from an envelope that it was believed van Gogh had once licked.

"Publishers Clearing House. Vincent van Gogh, you may already be a winner. HOT DAMN! I gotta get this in the mail!"

However, it turned out that the DNA wasn't a match, so she found an actual modern day descendant of Vincent, the great-great-grandson of his brother Theo.

Which I'm sure resulted in a rather awkward phone call.

This modern descendent would be Lieuwe van Gogh, who, it turns out, shares a Y-chromosome and one-sixteenth of Vincent's genome.

In case you were wondering, Iggy Pop was not a match. Nobody checked. But I'm telling you he wasn't a match.

So, now they had some living cells from Lieuwe (pronounced: "Dave"), and that led Strebe to the next step in the process, which was making a mold of van Gogh's ear with a 3-D printer.

The shape was modeled and designed by closely computing photos of van Gogh. And it had to be photos. Despite Vincent's talent, for an accurate reading, his self portraits were just a little too post-impressionisty.

Next, Strebe needed to get her hands on some cartilage cells. Which, I assume, is not something you can do by, say, hitting up your local corner dope pusher or stopping into Trader Joe's.

Nevertheless, obtained cartilage cells were injected with Lieuwe's DNA and added to the 3-D mold that had been created with a dissolvable sugar-polymer scaffolding.

And there it sat, inside a bioreactor, for several weeks, where, as the scaffolding dissolved, the cells grew, strengthened, and filled in empty spaces. 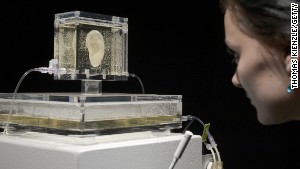 "Vincent, on behalf of all humanity, I apologize for that song Don McLean wrote about you."

And then (poof!) you had van Gogh's ear.

So long as we have a very loose definition of what we are willing to consider van Gogh's ear.

But we definitely had something.

And while the ear now sits suspended in a nutrient solution in Germany, the plan is to move the display to New York in 2015.

By then, though, I'm hoping we can add a few more famous missing parts to the exhibit, starting with Jerry Garcia's right-hand middle finger. Which just so happens to be the exact same missing digit as Chicago mayor, Rahm Emanuel's.

Look, I'm no artist. Hell, I think Dogs Playing Poker is one of the greatest cultural achievements in human history. But, that said, I'm pretty sure a regenerated middle-finger-face-off between Jerry Garcia and Rahm Emanuel would be worthy of its own room at the MOMA next to van Gogh's ear.

But good luck getting the genetics.

"Right. Sooooo, Rahm, I need some of your DNA for this ... middle finger I'm building."