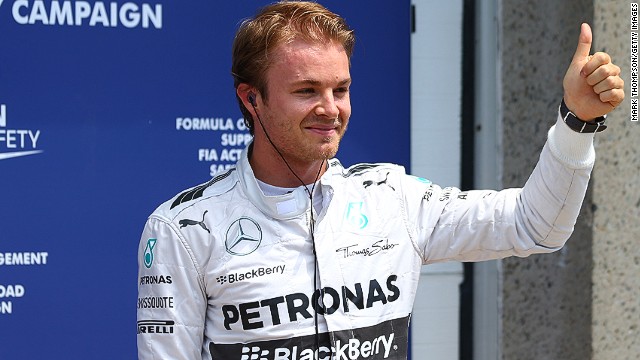 (CNN) -- Friend or foe? The first corner of the Canadian Grand Prix Sunday could settle the state of the fractious relationship between Mercedes rivals Nico Rosberg and Lewis Hamilton.

Rosberg pipped his English stablemate to pole position by just 0.079 seconds in qualifying at the Circuit Gilles-Villeneuve to set up a sizzling start to the race.

Facing the media in Montreal after his Monaco fallout with Rosberg, Hamilton said the spat was "done and dusted".

He explained: "We spoke after the race and just like friends we have our ups and down, we've known each other a long, long time."

It was Rosberg who did the talking on track Saturday, eking out extra pace on his final timed lap round the tricky, temporary circuit on the Ile Notre Dame.

The German, who leads Hamilton by four points in the Formula 1 world championship, set a quickest time of one minute, 14.874 seconds.

"I'm very, very happy it all worked out," Rosberg told reporters. "It's been a fantastic day and the best position for tomorrow."

Hamilton, who was upset after being unable to set his potentially quickest time in Monaco because of an error by Rosberg on his final lap, appeared to lock up as he chased down his teammate's leading time in Montreal.

Asked by reporters if it would be another tight race between himself and his teammate he said succinctly: "I would assume so, yes."

"I tried to take more risks and it worked," said Vettel, who out-qualified his teammate Daniel Ricciardo for just the second time this season.

"I kept it going until the end so all in all a good result and the maximum we could do.

"I'll try and stay as close I can to those two and maybe get some tow. If we have the chance to attack them then we'll go for it."

The Williams, powered by the dominant Mercedes turbo engine, performed well in Canada to show signs of finally coming good on its pre-season promise.

Valtteri Bottas will line up for the Canadian Grand Prix in fourth ahead of his teammate Felipe Massa and Ricciardo.