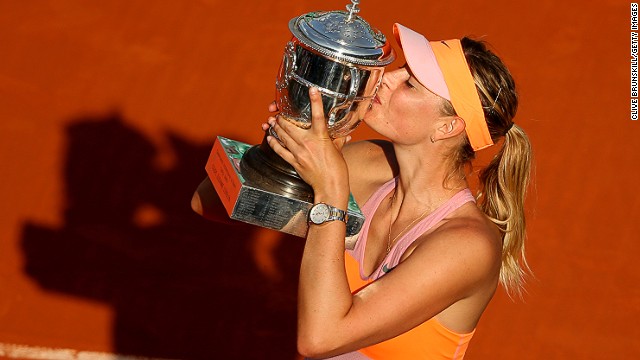 Sealed with a kiss. Maria Sharapova of Russia poses with the Suzanne Lenglen trophy after winning her second French Open title. 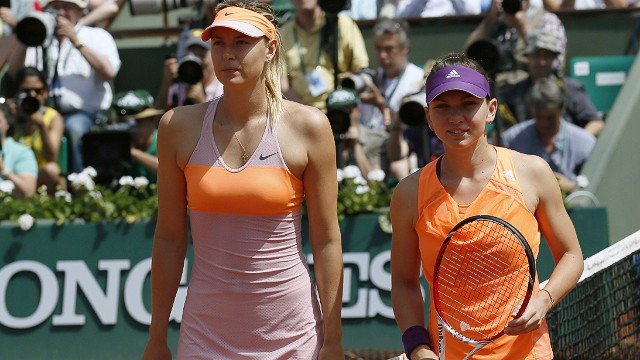 The 2014 female French Open finalists Sharapova and Simona Halep (right) line up for what will be a thrilling Roland Garros showdown. 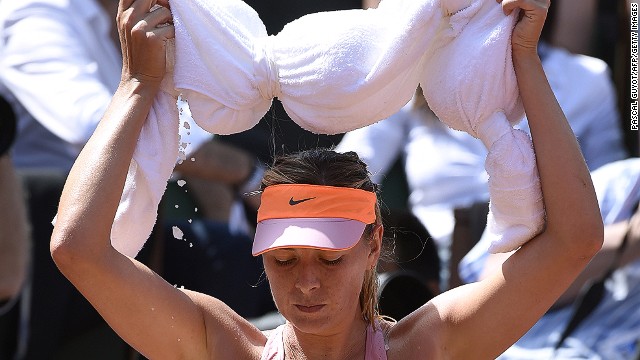 After some tough matches in the lead-up to the final, Sharapova keeps cool in between games. 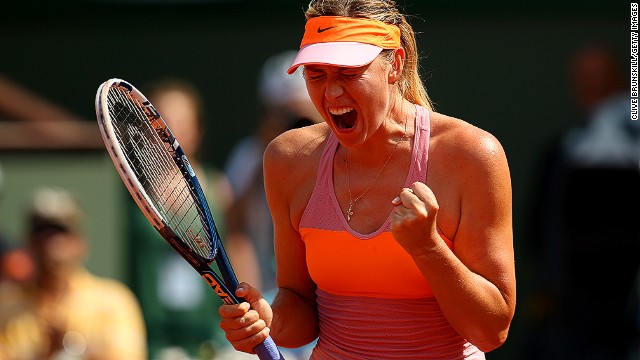 The Russian, who has featured in the last three French Open finals, celebrates as she seals the first set 6-4 in just under an hour. 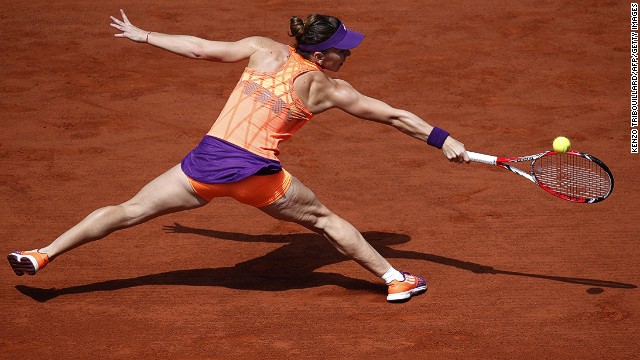 Halep, the world No.4, is stretched by Sharapova's big serves and powerful play but she hangs tough in a seesawing second set. 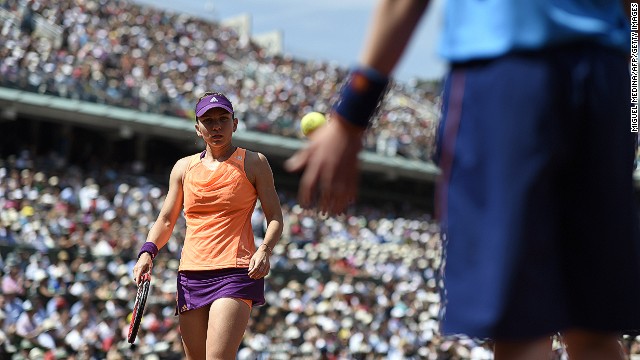 Halep forces a tiebreak in the second set and fights back from 5-3 down to win the breaker 7-5 and force a third set. 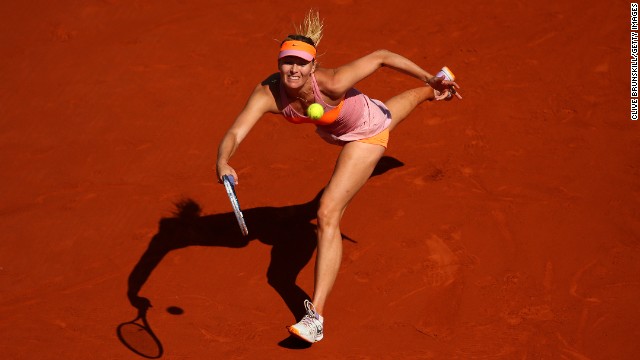 Under sunny Parisian skies, Sharapova takes a 4-2 lead as she breaks Halep in the fifth game of the decisive third set. 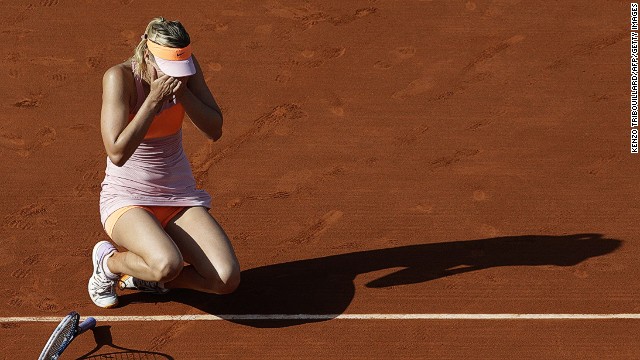 Paris, France (CNN) -- She's been called "beautiful," "hot" and "sexy" but when it comes to tennis, the most apt description for Maria Sharapova has to be "tough."

The Russian rallied from a set down three straight times to reach this year's French Open final and then prevailed in Saturday's thrilling three-hour finale against rising star Simona Halep, 6-4 6-7 6-4.

"This is the toughest grand slam final I've ever played," Sharapova, who was contesting a ninth such match, summed up as she collected her trophy.

Even after losing the second set and hitting a flurry of double faults, Sharapova still had the edge.

She's almost a sure thing in third sets on clay, having triumphed 20 times in a row. It's been six years since the 27-year-old was defeated after capturing the first set in a clay-court match, too.

But if Halep maintains this form, it won't be long before she opens her grand slam account.

Smaller and with less power than Sharapova, the Romanian nonetheless almost did the unthinkable -- toughing out the now five-time grand slam champion. Her manager, Virginia Ruzici, remains the last Romanian to win a grand slam, in Paris in 1978.

"If somebody had told me at some stage in my career that I'd have more Roland Garros titles than any other grand slam, I'd probably go get drunk," Sharapova later told reporters. "Or tell them to get drunk, one or the other.

"I feel that I worked to get to this position."

Her victory over the fourth seed made it 50 wins altogether at Roland Garros, good enough for seventh among the women in the Open Era.

"Sharapova is already considered one of the best competitors ever in my view," tennis analyst Pam Shriver, a former top-three player in singles and doubles, told CNN. "Just take alone what she has done since her shoulder surgery, how she regained her form not only post surgery but post service (woes) when most matches she was serving 10-15 double faults.

"Also think about clay and her never-give-up attitude with clay."

While Halep cried in her chair after the match, there were tears of joy for Sharapova, who made the now familiar climb up to her box in celebration. Halep's mood, however, quickly changed.

"I was crying at that moment for a few minutes, and then I was smiling because I said that it was my first grand slam final, and I have to be happy, to smile, because I did everything on court," Halep told reporters. "I played very good tennis, very good level. So I'm really proud about these two weeks."

Sharapova is routinely listed as the world's richest female athlete with a thick dossier of high-profile sponsors and with Saturday's check of more than $2 million, she also moved into second place in career prize money on the WTA tour behind Serena Williams at upwards of $30 million.

Once the American fell in the second round, Sharapova became the significant favorite. She has been virtually unbeatable on clay since the start of 2012 when facing opponents apart from the American.

Stretched to deciders by Samantha Stosur, Garbine Muguruza -- Williams' conqueror -- and Eugenie Bouchard on her way to the French final, it looked like Sharapova would drop another opening set when Halep held an early 2-0 lead on a second consecutive sweltering day in the French capital.

But Sharapova won the next five games to assume control, only to drop serve.

That's when the drama began.

Long games were the norm, pushing the duration of the opener to nearly an hour despite the routine 6-4 score.

A drubbing appeared to be on the cards in the second when Sharapova quickly established a 2-0 advantage.

The double faults -- overall Sharapova hit a dozen after mostly keeping those unforced errors down this fortnight -- combined with a more solid Halep soon got things level.

One of the finest rallies of the tournament -- 20 shots -- won by Halep earned her a break point at 4-4 and when she took it, a third set loomed. A net-cord winner at 30-40, though, allowed Sharapova to break back.

If somebody had told me at some stage in my career that I'd have more Roland Garros titles than any other grand slam, I'd probably go get drunk
Maria Sharapova

The to-and-fro ensued to the crowd's delight.

Halep broke for 6-5, was pegged back to 6-6, then reversed a 5-3 deficit in the tiebreak to ensure a first third set in a women's final at Roland Garros since 2001.

The 22-year-old's backhand, likened to that of male finalist Novak Djokovic, and movement, compared to Roger Federer, were in full flow -- and in the mental toughness department, she was matching Sharapova.

"She has very strong mental (game)," Halep said. "In important moments she's hitting very strong. I think I'm also good mentally. I'm very strong, and I tried just to stay very close to her during the match. I did very well."

By the time it was 1-1 in the third, there had been six straight breaks. The turning point might have been the fourth game, when Sharapova escaped to hold for 2-2.

I cannot wait to hold this trophy!! I'm speechless!

The former champion would never trail again, breaking for 5-4 after Halep said she was affected by a call that went against her and winning the final game with ease.