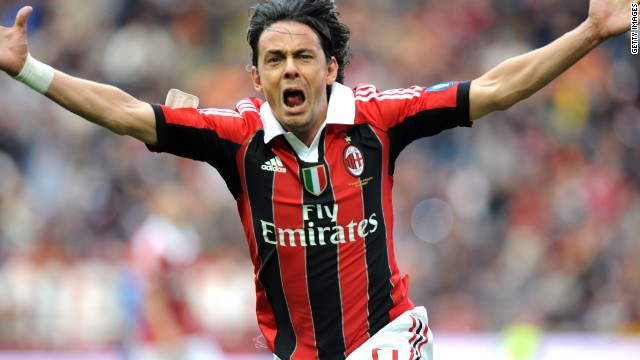 Filippo Inzaghi was a favorite with fans during his playing days at Milan.
STORY HIGHLIGHTS

(CNN) -- Filippo Inzaghi has scored some big goals in his time -- but his next goal may prove the most important and arguably the toughest.

One of AC Milan's most revered strikers has been given the opportunity to revitalize the ailing Serie A giant after being handed a two-year deal to become the club's new coach.

Inzaghi's joy is his former teammate Clarence Seedorf's misery with the Dutchman dismissed after Milan finished eighth last season, ruling the club out of European football for the first time in 16 years.

Clarence Seedorf has been dismissed. Filippo #Inzaghi has been appointed as first team coach until June 2016 http://t.co/y0NtXyu7B4

Inzaghi has long been linked with the job following his impressive work with the club's youth team.

"AC Milan wishes to communicate that coach Clarence Seedorf has been sacked, and the first team has been entrusted to Pippo Inzaghi until June 30, 2016," said a Milan statement.

Seedorf only arrived in January after replacing Massimiliano Allegri, but was unable to resuscitate Milan's flickering European hopes.

Since retiring in 2012, Inzaghi has worked with the club's Under-19 side and achieved success by winning the Torneo di Viareggio trophy for the first time in 10 years.

He holds legendary status at Milan following his goalscoring exploits -- 126 goals in 300 appearances.

He remains the club's most successful striker in European competition with 43 goals to his name, 70 in total following his time with Juventus

Former Manchester United manager Alex Ferguson once joked that Inzaghi "must have been born offside," testament to the Italian's predatory instincts in front of goal.

After arriving at Milan in 2001 following a move from Turin, Inzaghi won the 2003 Champions League and helped the Rossoneri repeat the triumph four years later by scoring both goals in the 2-1 win over Liverpool.

He started his playing career at Piacenza before going on to win two Serie A titles with Milan in 2004 and 2011 to add to his success with Juventus in 1998.

Inzaghi, who scored 25 goals in 57 appearances for Italy, retired in 2012, netting the winner on his final club appearance against Novara.

Beaten in the second round of the European Champions League by Atletico Madrid last season, Milan has already begun preparations for next season, signing Paris Saint-Germain defender Alex last week on a two-year deal.