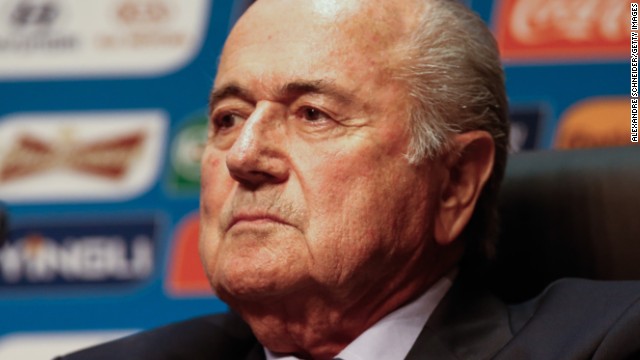 (CNN) -- Sepp Blatter faced a revolt from leading European football officials Tuesday over his intention to stand for re-election as FIFA president for a fifth four-year term from 2015.

According to UEFA sources, Blatter, 78, told a meeting of the European football confederation in Sao Paulo that he would be seeking a further mandate.

It reverses a pledge made in 2011 that he would not stand again and influential delegates at the meeting openly voiced their opposition to his U-turn.

"The atmosphere was quite tense during and after Blatter's short speech," the sources told CNN.

Blatter was directly challenged by Michael Van Praag, president of the Dutch FA, who told him that he should not continue after 2015 in his role.

Praag, a member of UEFA's executive committee, later relayed to gathered reporters outside the meeting what he had told Blatter.

"I then said at the microphone: 'I like you a lot, there is nothing personal here, but the reputation of FIFA is today inextricably linked to corruption.

David Gill, the English FA's representative on the Exco committee, also called on Blatter to reconsider his decision to seek re-election.

"The very fact in 2011 he was clear it was just for four years, that should have been the situation. To change his mind is disappointing," he said.

"I think we need a full, frank and open debate about what FIFA needs going forward," he added.

Brazil prepares for World Cup in 2014

Dyke was angered over Blatter's reported comments to the African Football Confederation (CAF) Monday that allegations of corruption made against the successful Qatar bid for the 2022 World Cup were motivated by racism and discrimination.

Read: Sponsors up pressure on FIFA over 2022

"I said to him, 'I regard the comments you made yesterday about allegations in the British media in which you described them as racist as totally unacceptable," Dyke told gathered reporters.

Dyke also voiced his disappointment over Blatter's intention to stand for re-election.

"We accepted four years ago he was going to step down (in 2015) and it's a surprise he is going to stand again," he told Sky Sports News.

"We would like to see an election, a competition and some different candidates," added Dyke.

The Dutch and British representatives were not alone in expressing their dismay over the leadership of football's world governing body.

According to UEFA sources, four members of its executive committee and its general secretary, Gianni Infantino, openly questioned Blatter's governance and his ability to lead necessary reforms in briefings to the media.

Blatter, who has been president of FIFA since 1998, will address its 64th Congress meeting Wednesday in Sao Paulo where it is expected he will make public his decision to stand for re-election.

The same meeting will also hear from U.S. lawyer Michael Garcia, who has been appointed by FIFA to lead an investigation into the bidding process for the 2018 and 2022 World Cups, awarded to Russia and Qatar.

Garcia was given the task of probing allegations of bribery and corruption, but his findings are not due to be made public until mid-July.

His investigation has been brought into sharp focus by a series of articles in the British newspaper The Sunday Times on the Qatar bid.

The newspaper claims to have unearthed millions of emails and other documentation which allege Qatar's former FIFA member Mohamed Bin Hammam used a multi-million dollar slush fund to buy support for the bid.

The claims have been strenuously denied by Qatar organizers, who in a statement released to CNN Sunday said they had been co-operating fully with Garcia's investigation.

"We remain totally confident that any objective inquiry will conclude we won the bid to host the 2022 FIFA World Cup fairly," it added.

The latest controversies come in the countdown to the 2014 World Cup in Brazil, which will start Thursday in Sao Paulo with a game between the hosts and Croatia.