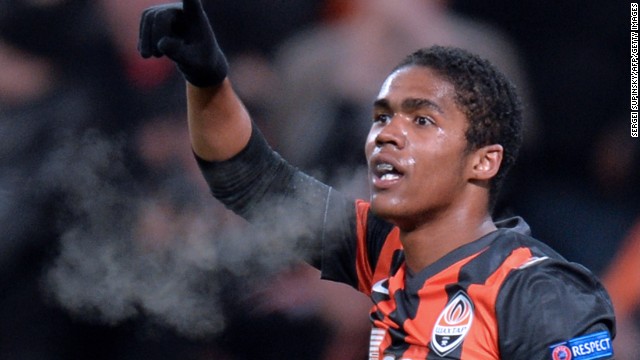 Douglas Costa is just one of Shakhtar's many Brazilian stars.
STORY HIGHLIGHTS

(CNN) -- The eyes of the world may be on Brazil with the World Cup about to kick off but the uncertainty which has engulfed Ukraine since the Russian annexation of Crimea remains.

And if you believe everything you read, then half the squad of Ukraine's leading club Shakhtar Donetsk is ready to leave the troubled region and head for the top European Leagues.

But reports of a mass exodus are premature, according to the club's general manager.

"I understand the concerns and I've had lots of agents on the phone asking me, 'Is it safe and will my player be OK?'

"But I tell them that we can 100% guarantee the security and safety of the players and their families.

"I understand that the families of the players are worried but it is fine here.

"We have not had to give them extra security."

Tensions remain high in the region although the election of new president Petro Poroshenko has provided hope that the political situation may improve.

The club, which regularly competes in the European Champions League group stages, expects the squad to return to Donetsk on July 26 following a preseason tour -- though contingency plans are in place if the political situation worsens.

"It is complicated here in Ukraine as everybody knows," Palkin added.

"But we hope we can resolve all the political problems and we're hopeful over plans to restart the league next season.

"At the moment, it is calm in Donetsk and there are no real problems.

"Of course, we have talked about contingency plans. We could move cities if the problems get worse but we do not expect that to happen.

"We are very confident we will all meet up on July 26 for the new season."

Shakhtar, which has won five consecutive league titles, boasts a number of players from South America including Brazil's Bernard.

The midfielder, who has been included in the country's World Cup squad, has reportedly been attracting attention from a number of English Premier League clubs.

But Palkin rejected claims the club is under pressure to sell off its prized assets.

"I've read everything in the newspapers but there is nothing in it," he added.

"We are not under pressure to sell and nobody has requested a move.

"Of course, if a team comes in with a good offer then we'll consider it but we have no intention of selling our best players."