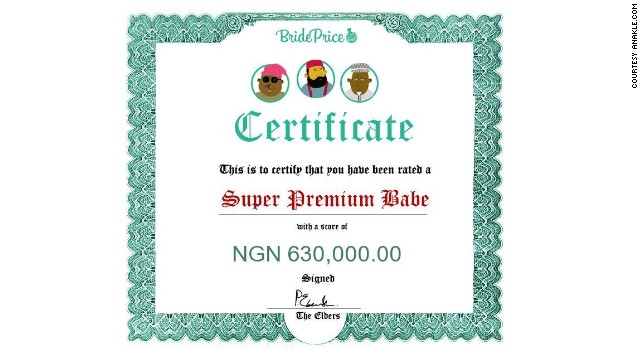 Bride Price: the app that calculates your worth and gives you a certificate to prove your status to potential suitors
STORY HIGHLIGHTS

Knowing your worth has taken on new meaning since the launch of "Bride Price," the app that calculates the users' value based on answers to a series of ranked questions ranging from height and weight to leg shape and cooking skills.

You could lose a whopping 60% of your bride price for being a "Mama Ronke," the heaviest weight category, while "sexy bow legs" a la Beyoncé would add N20,000 ($123) to your price.

As entertaining as this quiz may be to complete, categories like skin color could be cause for concern. To begin with, the app uses the controversial term "Half-caste," which would add N50,000 ($308) to your worth, just like the answer "Lupita" -- some say this pays testament to the impact Kenyan actress Lupita Nyong'o has had on the perceptions of beauty and darker skinned girls. While "dark" is still ranked as the second most undesirable skin color, skin bleachers are also devalued.

The scrutiny is not over yet; face quality is then assessed, followed by nine more categories. Be careful in the final bonus round, you could be fined N40, 000 ($264) for being a "club girl."

Such a controversial app comes with a disclaimer, of course. 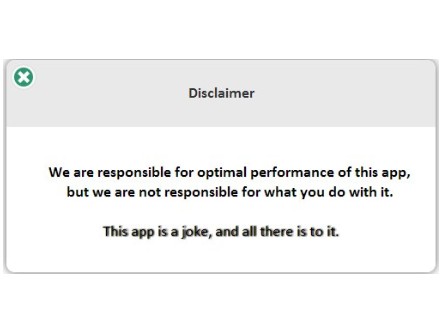 "Bride Price," which was developed by Lagos-based digital agency Anakle, has had two million views since its release on May 25, the vast majority of which came from women.

People from over 180 countries have used the app, according to the company, with Nigeria, the United States and the UK generating the most traffic.

The app quickly went viral after a private link was tweeted on Sunday May 25, forcing the brand to switch servers, and "Bride Price" to trend in Nigeria.

The term bride price nowadays refers to a usually symbolic amount of money or gifts given to a woman's family by her fiance at the time of their marriage. In some cases, however, families return the symbolic payment to signify that their daughter is not for sale.

Juliet Gilbert, who has just completed a PhD in social anthropology researching young women's livelihoods in Nigeria, says the "bride price is an incredibly significant part of marriage customs in Nigeria" that "should be seen as a token of respect towards and provision for family and community, rather than a monetary value placed on an individual female."

She explains that in Calabar, for example, "the bride price itself is negotiated after the first formal 'introduction,' when the fiance is introduced to the girl's parents. The girl's family will then write a list of everything they require from the fiance's family -- this is not just money but could also include rice, (fresh) palm wine or crates of beer and soft drinks.

"The fiance's family then look at the list and agree on what they can afford before going back to negotiate with the girl's family. There is then a formal meeting of both families, where the girl identifies her fiance in front of her whole family, who check that everything on the list has been brought to them. Only after this is all satisfactorily achieved can the traditional marriage go ahead."

Gilbert adds, however, that the bride price practices vary considerably between ethnic groups, and even within them due to families' wealth and status. "It is custom for fathers in Ogoja (northern Cross River State) to give back the money to his new son-in-law during the traditional marriage ceremony, saying, 'My daughter cannot be bought but you can marry her.'" 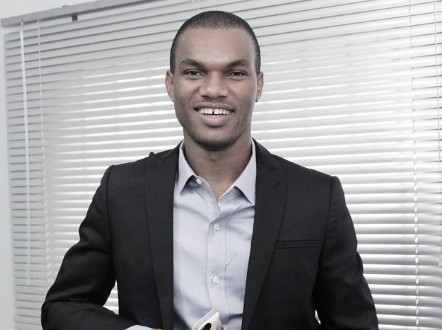 Editi Effiong, who owns Anakle, has made it clear that the app is supposed to be a bit a fun. His own wife, he says, was one of the first users of the app which was developed by a mostly female team:

"Did I pay a bride price?" he asks. "Yes! Nigeria is a big, complex country, with over 200 tribes, but where I come from, the entire process of marriage is designed to show respect to the wife's family," adds Effiong.

"As insignificant as the bride price is -- N30 ($0.18) in my case -- it must be collected. I value this tradition, and think it's a part of our culture we must preserve.

"I went overboard with buying gifts for my wife's family, because I was very young then, and I wanted to show I really respected them. It may be hard for our foreign audience to understand, but I don't see why the scores on any app, joke or not, should affect the love I have for my wife, or her self-worth."

The app has had mixed reactions both in Nigeria and across the world with some seeing the funny side, such as British-Nigerian journalist Bim Adewunmi, who wrote a tongue-in-cheek commentary on it for the Independent.

That Nigerian Bride Price app has been making me laugh for 24 hours. PS: I'm Premium Babe. Send 100 yards of lace to the family homestead.

Others were outraged, including Cosmopolitan's Frank Kobola who labeled it a "horrifying, sexist quiz" and Ikechukwu Onyemelukwe who has started a petition to remove the app which reached 100 signatures on May 28.

I believe in free speech. But http://brideprice.com.ng doesn't do women or the struggle for gender equality & equity any good.

While many users shared their bride price on Twitter.

Although there were some concerns about the criteria.

Why is does the bride price calculator discriminate against PhD holders though? Over sabi? 😂😂

Effiong told CNN the reasoning behind this: "That's a Nigerian inside joke. On the average Nigerian street, there's a joke that 'too much book dey worry person' (a tongue-in-cheek reference to too much education). But this doesn't mean PhDs are devalued.

"Over the weekend, we hosted a party for my former boss, who just bagged a PhD. Nigerians are some of the most educated people in the world. But us Nigerians, we don't take ourselves too seriously."

Use the comments section below to tell us what you think about the "Bride Price" app.

Read: The rise of Lupita Nyong'o

Read: Building peace in Africa? Give power to women