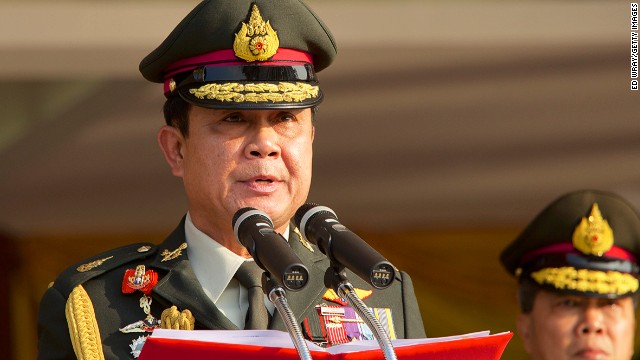 Gen. Prayuth Chan-ocha has written the lyrics to a patriotic song vowing to "restore happiness" to Thais.
STORY HIGHLIGHTS

(CNN) -- Thailand's new military ruler has added a personal touch to his junta's post-coup charm offensive, penning the lyrics to a patriotic ballad vowing to "return happiness" to the country.

Performed by the Royal Thai Army band, the song, "Return Happiness to Thailand," has so far racked up more than 200,000 views on YouTube since it was released on Friday. It is played regularly on Thai radio and television and has featured at the military's goodwill concerts around the country.

Colonel Krisada Sarika, head of the Royal Thai Army band, was quoted in Thai media as saying Gen. Prayuth Chan-ocha had rattled off the lyrics, in his own handwriting, in about an hour.

The song includes the couplet: "Let us be the ones who step in before it is too late / To bring back love, how long will it take?"

Since the May 22 coup d'etat, the country's 12th in 82 years, Thailand's junta has embarked on an unprecedented PR campaign to win hearts and minds in a divided country.

The National Council for Peace and Order, as the regime calls itself, has held public festivals featuring mini-skirted dancers, free haircuts, petting zoos and stands where the attendees can take "selfies" with soldiers. On Sunday, the regime is promising free tickets to screenings of a patriotic movie across the country.

"Earlier coups did not require as much PR campaigning because public expectations and media tools of scrutiny at home and abroad were less pervasive and powerful," he said.

The campaign has been conducted under the banner of "happiness." On Friday, Prayuth delivered the first of a planned weekly TV and radio broadcast, "Returning Happiness to the People," in which he repeatedly struck on the concept while outlining his junta's vision.

"We need to solve many issues; from administration to the budget system, corruption, and even the starting point of democracy itself -- the election. Parliamentary dictatorship has to be removed. All these have caused conflict and unhappiness among Thai people," he said, in comments questioning whether Thailand was ready for democracy.

"We intend to return happiness to everyone living in Thailand."

But the cheery overtures have been accompanied by an unrelenting crackdown on dissent, with hundreds of people rounded up, including academics, journalists, activists and politicians.

The junta has urged government officials to identify potential troublemakers among their colleagues, and issued warnings about liking dissenting posts on social media or flashing the three-fingered anti-coup salute co-opted from the Hunger Games films.

Pavin Chachavalpongpun, a Thai associate professor of Southeast Asian Studies at Kyoto University, described the happiness campaign as a "gimmick," and a "very crude form of populism" that was unlikely to work.

"I don't think the majority of Thais will buy into this happiness project, because there is nothing to be happy about when your basic human rights have been taken away, when you cannot even express how you feel in public peacefully," he said.

"The reality is they're continuing to hunt down and harass people. Happiness versus a climate of fear -- it doesn't go together."

Thitinan said he believed the campaigning might help the regime, but only in the short-term.

"Initially, the hearts-and-minds campaigns will seem to hold promise because of the complete dominance of the new regime and the lack of alternatives," he said.

"But it would be surprising if these superficial and manufactured approaches succeed in resolving such deep-seated conflicts that have built up over many years."