Franz Beckenbauer banned by FIFA for 'failing to cooperate' 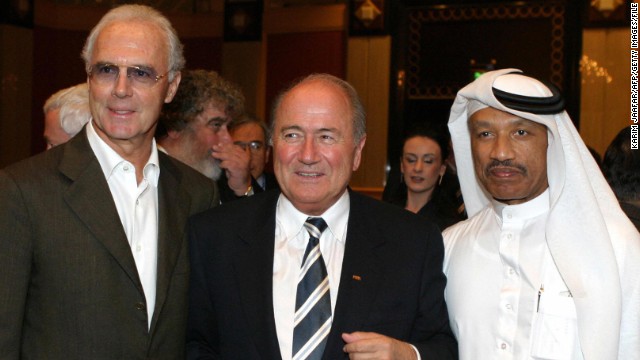 (CNN) -- One of Germany's most famous footballers has been banned by soccer's ruling body for failing to cooperate with an investigation into corruption within the game.

Franz Beckenbauer, the only man to win the World Cup as captain and coach, has been provisionally suspended from any football-related activity for 90 days.

FIFA said in a statement Friday that the 68-year-old had been asked to help with its Ethics Committee's probe into allegations against Qatar 2022 and the World Cup bidding process.

"The apparent breach relates to Mr. Beckenbauer's failure to cooperate despite repeated requests for his assistance, including requests that he provide information during an in-person interview or in response to written questions provided in both English and German," FIFA said.

"The case is now the subject of formal investigation proceedings being conducted by investigatory chamber member Vanessa Allard as chief of the investigation."

The chairman of the committee's investigatory body, New York lawyer Michael Garcia, is expected to announce his findings by the end of July after a long-running examination of the circumstances that saw Russia and Qatar awarded the 2018 and 2022 World Cups respectively.

The December 2010 vote by FIFA's executive committee members to take the sport's showpiece tournament to the Middle East for the first time has been mired in controversy.

Before it even took place, two high-ranking FIFA officials -- Nigeria's Amos Adamu and Oceania representative Reynald Temarii -- were banned after allegations of bribery.

FIFA vice-president Jack Warner chose to quit the following year after being implicated in another bribery scandal involving Mohamed bin Hammam, then head of the Asian Football Confederation.

Bin Hammam, who had hoped to be Sepp Blatter's sole challenger at that year's FIFA presidential elections, was banned for life.

The Qatari has this year been involved in new allegations by Britain's Sunday Times newspaper, which claimed he had been offering bribes to FIFA delegates for support of his country's 2022 bid.

The 65-year-old -- a former FIFA ExCO member -- has denied all accusations, while the Qatar 2022 Organizing Committee insisted that Bin Hammam had not been working for them.

Garcia told FIFA's Congress of its 209 member nations this month that he had been aware of most of the evidence published by the Sunday Times ahead of the 2014 World Cup in Brazil, which kicked off on Thursday.

Blatter used the Congress in Sao Paulo to indicate that he wants to stand for a fifth term in charge, breaking the promise he made when winning unopposed in 2011 that it would be his last.

The former France international has indicated he is unlikely to run against the Swiss in next year's elections, but compatriot and former FIFA official Jerome Champagne will stand against his old boss Blatter.

Beckenbauer led West Germany to World Cup success as a player in 1974 and as coach in 1990.

He played a leading role in a united Germany hosting the 2006 tournament, and was one of the 22 FIFA EXCo members who voted on the 2018 and 2022 events.

The Sunday Times alleged that he visited Qatar before and after the 2010 vote after being invited by Bin Hammam.

Last week Beckenbauer told German media that he did not respond to Garcia's questions because they were in English and he did not understand them.

Although he is no longer an ExCo member, Beckenbauer is still listed on the ruling body's website as a special adviser to the FIFA Football Committee.

He is also an honorary president at Bayern Munich, the club where he spent most of his playing career and won three successive European Cups from 1974-76 and four German Bundesliga titles.

Meanwhile, Interpol has sent a team to Brazil and to key areas around the world due to serious concerns about match-fixing and illegal betting at the World Cup.

"There are organized crime groups engaged in illegal betting, and with illegal betting there's a greater likelihood that there could be an influence on the outcome of the match or an influence on what happens on the pitch based on a bribe or some kind of corrupt act," the international crime agency's Secretary General Ron Noble told CNN Friday.