Apparently This Matters: Service dog has his day in school yearbook 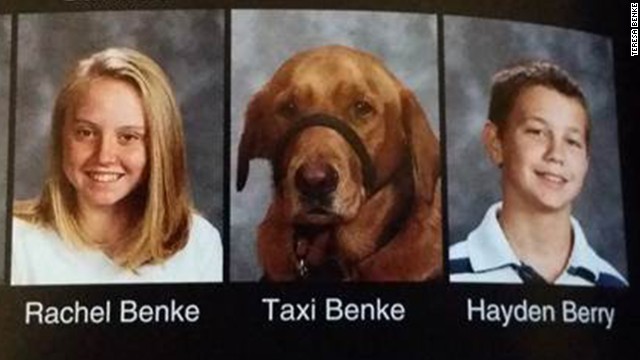 (CNN) -- I would love to say my dog is intellectually qualified to be a service animal. But he's not. There's barely enough brainpower there to be a lamp.

In fact, Mikey's only apparent skills appear to be power napping and somehow reaching unspeakable parts of his body with his tongue.

Which, to be fair, is definitely a skill, though not one that easily lends itself to helping humans.

"There's a little boy stuck in the well! Quick, Mikey, molest yourself for 20 minutes!"

Alas, being a true service animal requires something special. And even some of the very brightest dogs, those with the best training in the world, never quite live up to their potential.

And that's exactly what happened to Taxi, a golden retriever/Labrador who was supposed to become a guide dog.

If it wasn't for those damn cats.

That was Taxi's weakness. Just couldn't lay off the cats.

But it turns out he had another calling. Taxi became a seizure alert dog, for 14-year-old Rachel Benke of San Antonio, Texas.

When Rachel was born, she had an abnormality on the right side of her brain that caused epileptic seizures.

For the first several years of her life she was mostly nonverbal and couldn't eat solid food. When she turned 6, however, two corrective surgeries greatly reduced the frequency of her seizures and allowed her to start developing new skills.

Then, four years ago, Taxi came into her life. Ever since, they've been inseparable; he even joins her at school.

And this year, Taxi finally got his own picture in the yearbook.

That was a big talker all over the Web this week. Because it's adorable.

When Rachel takes Taxi with her to school, he's there to warn of oncoming seizures and to also assist her in the event of one actually happening.

But mostly he just lays around, not participating in anything remotely educational.

So, in a lot of ways, his accomplishments in school are slightly more impressive than mine. Unless you count occupying space and disrupting others.

But there was just something about that photo.

When Taxi's big, serious face appeared in the Hector Garcia Middle School yearbook and hit the Web, people just couldn't resist. There he was. Taxi Benke. Just to the right of Rachel Benke.

And just to the left of: Hayden Berry.

Anyway, it's a well-deserved addition. Rachel's mom had joked about Taxi's exclusion the previous year, so this time they got it right.

And, if nothing else, Taxi's newfound Internet fame has added an interesting bit of education about seizure alert dogs.

Rachel's family can share several incidents where, somehow, Taxi just knew. He could smell it.

Conversely, sometimes I drop food on the kitchen floor and Mikey literally has no idea.

He'll be just steps away. And nothing.

"Mikey, there is literally free food on the floor. That you can eat. It's bacon, stupid." 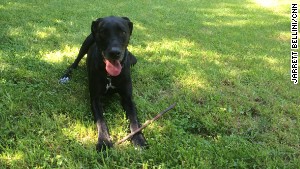 Mikey, lording over his poop kingdom. Oblivious to free food and his human's well-being.

Taxi would be all over that.

Now, it's worth noting that the Epilepsy Foundation isn't fully convinced that seizure-predicting dogs do exactly as some people believe. They believe the bulk of this evidence is mostly anecdotal. So, they warn people to exercise caution when considering this type of canine service.

Either way, there's something special about Taxi. Multiple times he's warned others about oncoming seizures. He just knows.

He's always right there on Rachel's left side because that's the direction she falls. And Taxi knows to position himself there so he can protect her from slamming into the ground.

Again, just for comparison, I could be on fire and Mikey would be completely preoccupied, lording over his Poop Kingdom in the backyard where he's waged a full-scale yet poorly strategized border war with Noodle, the wiener dog next door.

So, clearly, Taxi is special and has earned his place in the yearbook.

Right next to Rachel.

And just left of MC Hayden B.