(CNN) -- Bodies were strewn in the streets amid a backdrop of burned cars and charred buildings in the small Kenyan coastal town of Mpeketoni on Monday.

This quaint town, nestled in the well-known tourist resort of Lamu Island on the Indian Ocean, has been the latest target for attackers thought to be members of the Al- Shabaab terrorist group.

A World Cup viewing party turned into a bloodbath, eyewitnesses told CNN on Sunday. Armed men stormed the city center, shooting and hacking people to death before moving into a residential area, where they went from door to door, the witnesses said.

Mpeketoni sits to the west of the Kenya-Somalia border, where the Kenyan army is fighting troops loyal to the al Qaeda-linked militant group. 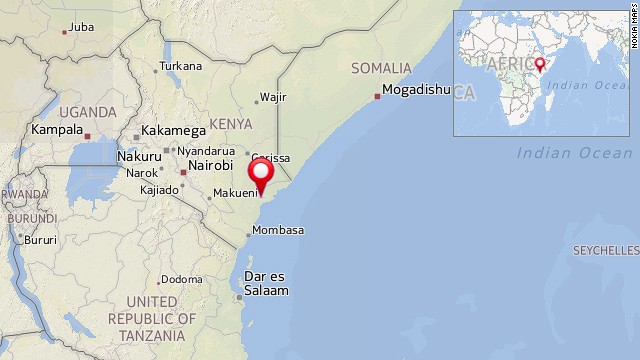 There were no claims of responsibility for the attacks, but the Kenyan Disaster Operation Centre blamed them on Al-Shabaab.

The heavily armed gunmen, many in military uniforms, attacked hotels, a restaurant, gas station, bank, police station and a government office, according to the Kenyan Red Cross. Video from the scene shows burned-out vehicles and walls pockmarked by bullets.

"As of now, we have not been able to identify the real number of the casualties who might be in the other hotels which have already been burnt out," said Eric Mugo, deputy governor of Lamu.

The Kenya Red Cross put the death toll from the incidents at 48.

Last month, at least 10 people were killed in two explosions in central Nairobi.

As many as 76 people were wounded in the blasts at the Gikomba market and on a public minibus, the disaster agency said. Ambulances evacuated 43 injured males and 33 injured females, the Kenya National Disaster Operation Centre said.

Two suspects were arrested in connection with the explosions, which were caused by grenades, Nairobi Police Commandant Benson Kibuye said.

The Kenyan military crossed into Somalia in 2011 to battle Al-Shabaab, which it blamed for kidnapping tourists in the coastal region. In retaliation, the terrorist group has launched a spate of attacks, including targeting bustling bus stations with grenades.

Last year, Al-Shabaab militants stormed the Westgate Mall in Nairobi and held shoppers for days. At least 67 people were killed.

Residents of Mpeketoni are now left to piece together what remains of their small town. One body at a time, names are put to faces lost to the recent wave of brutal attacks.