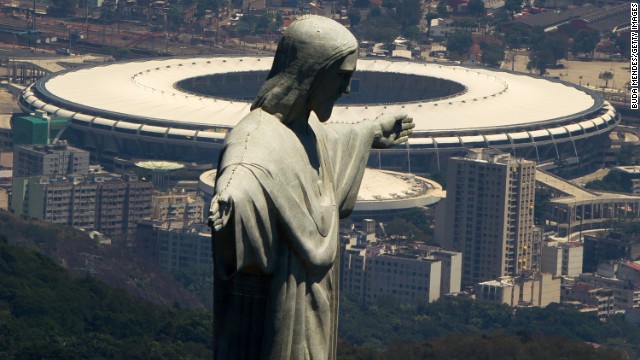 Chile play Spain in the Maracana stadium on Wednesday in the World Cup. Back in 1989, the stadium was the scene of one of the World Cup's most controversial games... 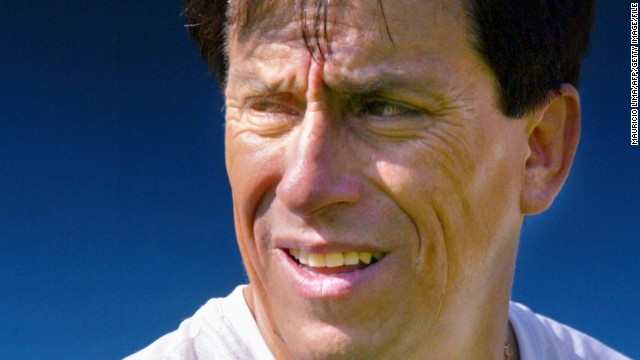 During a key World Cup qualifier against Brazil, Chile goalkeeper Roberto Rojas -- in a pre-planned incident -- used a razor blade hidden in his gloves to cut his own head while lying on the floor. Chile were subsequently banned from the 1994 World Cup. 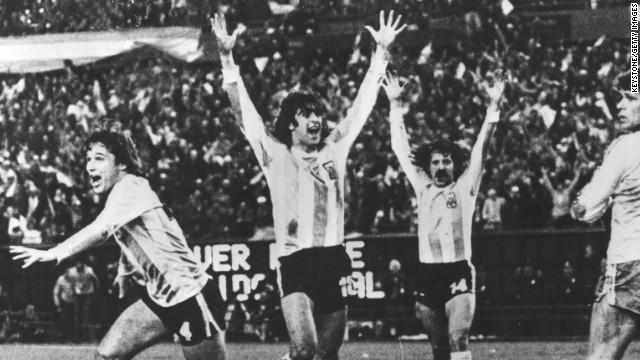 In 1978, World Cup hosts Argentina coasted to a 6-0 win over Peru in their final match of the second phase to oust Brazil on goal difference, prompting cries of fix from their South American rivals. 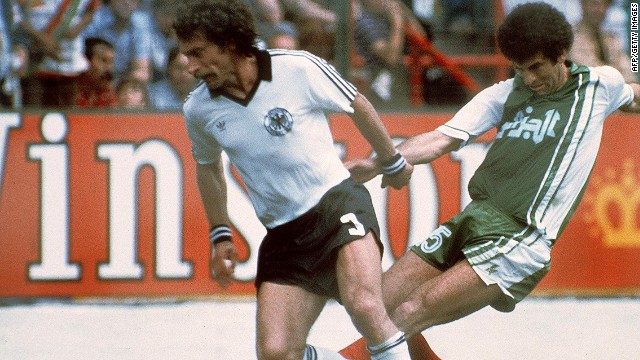 "Out, Out" chanted the fans as West Germany and Austria ensured their second round qualification in 1982. West Germany's 1-0 win over Austria sent both sides into the knockout stages at the expense of Algeria. 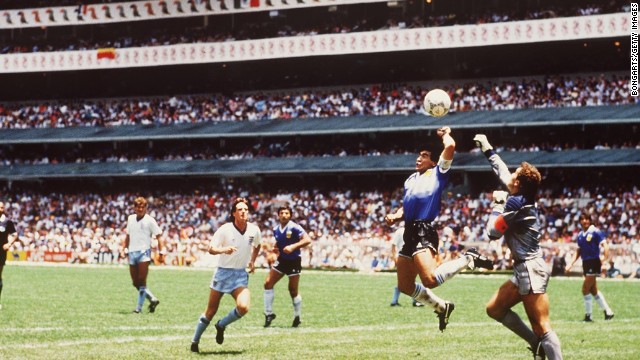 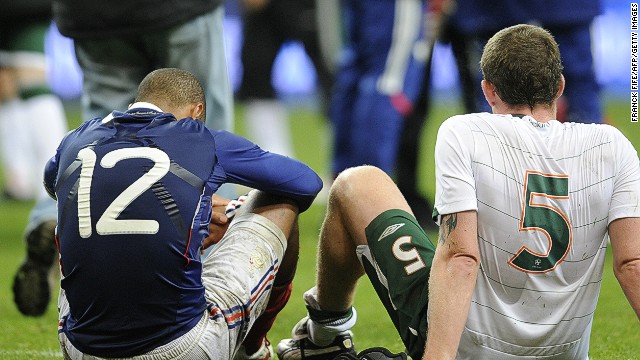 Thierry Henry sank Irish hopes of reaching the World Cup in Maradona-esque style. The striker handled the ball in the buildup to William Gallas' goal in a 1-1 second-leg draw in Paris, earning France a 2-1 aggregate playoff win and a place at the 2010 World Cup. 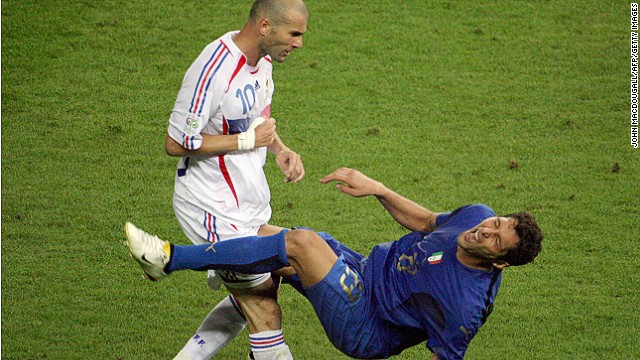 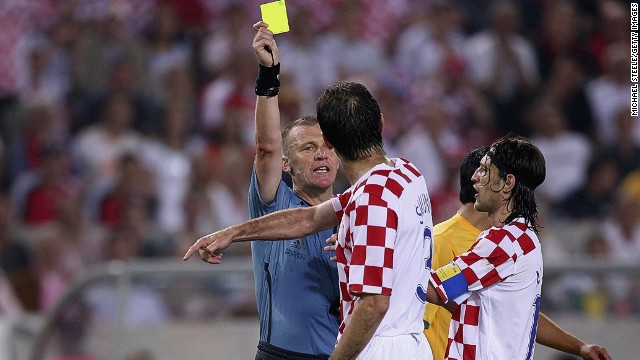 English referee Graham Poll wrote his name into the history books when he booked Josip Simunic three times during a 2006 World Cup group game between Croatia and Australia. 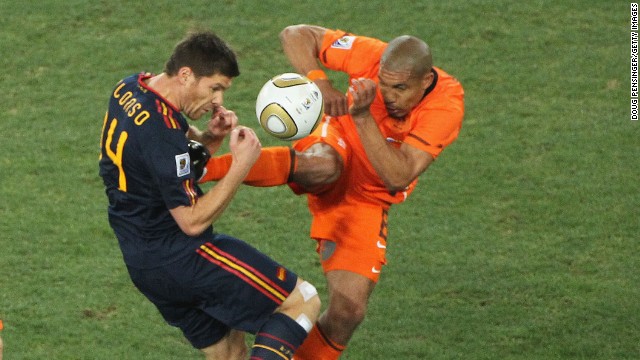 (CNN) -- It's one of the greatest World Cup scandals and 25 years on Chile return Wednesday to the "crime scene" that resulted in the South American country being banned from the 1994 World Cup.

It's a story of brazen deceit and shameless subterfuge and had it not been for the photographic skills of just one man, Brazil's unimpeachable record of being the only side to have competed at every tournament would have been put into serious jeopardy.

Victory for either Brazil or Chile in their final qualifier at the Maracana Stadium would have taken them to the 1990 World Cup. With 20 minutes left, Brazil were 1-0 up and looking good for qualification, especially since a draw would also take them through.

Then, their world suddenly fell apart.

Chile had a plan which they had prepared and it was unbelievable, truly unbelievable.
Former Brazil captain Gomes

In the Chile penalty area, goalkeeper Roberto Rojas was prostrate on the floor, seemingly hit by a flare that was still fizzing and pumping smoke into the sky just inches from him.

As legendary Brazilians Bebeto, Dunga and Careca looked on, Chile's players rushed towards Rojas -- furiously beckoning the medical staff once they had reached him.

With the blood leaking from his head turning his jersey crimson, Rojas was soon carried off the pitch and, as booing filled a bewildered Maracana, the match officials soon abandoned the game.

With the flare having been thrown from a Brazilian section of the stadium, football's greatest superpower -- Brazil has won the World Cup five times -- was facing an unprecedented elimination.

"I was terrorized," Ricardo Gomes, Brazil captain on the day, told CNN. "I thought immediately of losing the chance to go to the World Cup. It was something really bad."

Now a football agent, Paulo Teixeira was working as a pitch-side photographer that day.

I thought immediately of losing the chance to go to the World Cup. It was something really bad.
Former Brazil captain Gomes

"Amazing as it may sound, no TV camera caught the moment the flare flew over and supposedly hit the goalkeeper," he told CNN.

"We photographers were sitting along the side line and saw the flare come over. I was amazed to see Rojas rolling over and bleeding from an eye, as the device had hit the ground about a meter from him."

With neither TV nor photographic evidence to prove otherwise, Brazil were in deep trouble but, wholly unbeknown to them, they were on the wrong side of an enormous hoax.

In a planned incident, Rojas -- a highly-respected goalkeeper who was playing for Brazilian side Sao Paulo at the time -- had used a razor blade hidden in his gloves to cut his own head while lying on the floor.

It was the most Machiavellian play to ensure Brazil's elimination, but no one in Brazil had any hope of proving that.

Unless evidence could be found.

"Now of course -- with all the cameras on mobile phones around -- it would have been impossible," said Gomes.

"I missed the shot and so did most of the photographers," recalled Teixeira. "But there was one guy by me -- Ricardo Alfieri, a good friend -- and I asked him: 'Ricardo, did you capture the flare?' He said: 'Of course, about 4-5 shots.'"

Teixeira immediately realized the huge significance of the shots but in an age when cameras recorded images onto slides, rather than digitally, obstacles remained.

"Ricardo had a problem. He was on assignment for a Japanese magazine and had to send the films to Tokyo -- unprocessed -- the next morning, and the Japanese would only trust their laboratory," recalled Teixiera of his fellow photographer, who now works for the South American governing body Conmebol.

"I said to Ricardo: 'Listen, you are the only one to have the evidence that Rojas is lying and cheating. I won't let you out of my country with those films unprocessed.'"

Just after the game had been abandoned, Teixeira had watched aghast as a Chilean pundit told a local radio station how he had seen the flare hit Rojas, so turning the knife into Brazil's unprotected back.

"So I found the radio reporter and told him Ricardo had the shots. He put Ricardo live on air and the whole atmosphere changed," Teixeira recalled.

"Ten minutes later, Brazilian football president Ricardo Teixeira [no relation] walked into the dressing room where we were. He was livid -- his face white, black, red, yellow -- all colors.

"'Who has the films?' he asked. I have them, I answered. I was the biggest asset on earth at that point and Teixeira was always asking if I was sure about the shots. But I knew I could rely on Alfieri's word, because he was the best."

So began a frantic -- and equally anxious -- scramble to see if the images really proved that Rojas had cheated.

"It took four hours to warm up and prepare the laboratory. The lab lady was furious -- having been dragged out of her Sunday to work at night," Teixeira said.

While the lab was heating up, so were the deliberations over which agency would get the pictures. With one baulking at Teixeira's demand for five thousand dollars, the famous Globo network agreed to stump up the sum for the images.

I met Rojas many years later and he admitted his mistakes. He is not naughty but that day, he had a lapse -- a really bad decision.
Former Brazil captain Gomes

"When the pictures came out, there were four clear shots -- starting with the device flying and then landing one meter away from Rojas. (CBF president) Teixeira was so relieved," said the agent Teixeira.

On the Monday evening, Globo ran the scoop -- showing pictures that proved Rojas' play-acting -- in a program called "Jornal Nacional", a copy of which CBF boss Teixeira showed to FIFA after flying to their headquarters in Switzerland.

Satisfied by the documentary evidence, football's world governing body awarded Brazil a 2-0 technical victory that duly took the nation to the 1990 finals.

FIFA ruled that Chile had broken the regulation of leaving the pitch before a game's conclusion and then issued a final judgment, suspended Chile from the 1994 World Cup. The world governing body also issued a life ban to Rojas from playing football, with Chile's coach and team doctor receiving a similar ban.

Then just 32, Rojas could continue to work in football however and as he licked his wounds back home in Chile, help came from an unexpected source -- Brazil itself.

"In 1993, Sao Paulo coach Tele Santana and the club president traveled to the Chilean capital Santiago to ask Roberto to work at the club as the goalkeeping trainer," Viviane Rojas, his wife, told CNN.

Rojas declined an interview request on the grounds of poor health.

The 56-year-old, whose FIFA ban was lifted in 2001, has been awaiting a liver transplant for three years now, after contracting Hepatitis C, and underwent a five-hour operation in March to relieve the accumulation of fluid in his lungs, according to Viviane.

Despite his elaborate attempts to deny Brazilians what they consider to be their sporting birth right (i.e. playing at the World Cup), Viviane says Rojas receives no animosity as they live their life in Sao Paulo.

"Here in Brazil, Roberto has always been loved," she said. "The most important thing for Brazilians is that he has, in his interviews, come across as a human being with a very distinct and good character. He has admitted his guilt and been forgiven.

"He showed his strength of character through his work and after training (Sao Paulo) goalkeeper Rogerio Ceni to be one of the best, Roberto also coached Sao Paulo for a brief spell from 2003 -- qualifying the team for the Copa Libertadores."

Viviane's sentiments are backed up by former Brazil captain Gomes, who bears no malice towards a man who could have stolen his only chance of playing in the World Cup finals.

"I met Rojas many years later and he admitted his mistakes. He is not naughty but that day, he had a lapse -- a really bad decision," Gomes said.

"The strangest thing is they had a good team."

On Wednesday, Chile are back in the Maracana as they continue their 2014 World Cup campaign with their second group game against Spain.

Given Spain lost their first game, while Chile won their opener it should be a cracker -- but hopefully without the fireworks of the 1989 game.

Read: Have you tried "Persieing"?