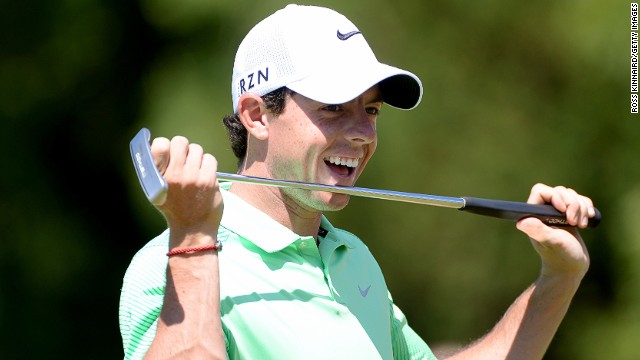 Rory McIlroy has announced he wants to represent Ireland at the Rio Olympics in 2016.
STORY HIGHLIGHTS

(CNN) -- The World Cup has provided a festival of football and color in Brazil, and its intoxicating nature has had an effect far away from the shores of the Copacabana.

The action and fervor sparked by one of the biggest sporting events in the world has prompted Northern Ireland's two-time major champion Rory McIlroy to turn his mind to another -- the Olympics.

And as he stepped up his preparations ahead of the Irish Open in Cork, he decided to announce he'll be representing Ireland at the Rio Olympics of 2016.

McIlroy had previously stated his intention to compete under the Great Britain and Northern Ireland banner when golf returns to the Games after 112 years.

But confirming his change of heart at a press conference ahead of the Irish Open this week, he said Brazil's hosting of the World Cup had provoked his declaration.

The rise of golf's child stars

"I've been thinking about it a lot," he told reporters at the Fota Island Resort. "I feel like it's the right decision for me. There's no point in delaying it and letting it linger any longer.

"I don't know whether it's been because the World Cup has been in Brazil and I've been thinking a couple of years down the line.

"If you look at the (Irish) rugby players, you look at cricketers or hockey players ... they view Ireland as one, the same as we do in golf.

"So I don't think there's any point to change that or any point to go against that just because it's a different event or it's the Olympics.

"I was always very proud to put on the Irish uniform and play as an amateur and as a boy, and I would be very proud to do it again."

McIlroy, from Holywood in County Down, played amateur golf on an all-island basis before he turned professional and is eligible to represent Great Britain and Northern Ireland as well as the Republic of Ireland.

The U.S. Open and U.S. PGA Championship winner received funding from the Golfing Union of Ireland before turning professional in 2007.

Hey @united landed in Dublin yesterday morning from Newark and still no golf clubs... Sort of need them this week... Can someone help!?

And he has represented Ireland twice in golf's World Cup event, both times playing alongside compatriot Graeme McDowell -- the 2010 U.S. Open champion.

"The majors in our sport are the biggest and best prizes in the game. But as hopefully golf grows in the Olympics and becomes say bigger in four or five Games down the line then it might become bigger."

Aside from the 2016 Olympics, McIlroy's more immediate concern was getting his clubs back after they were lost in transit by United during his flight to Ireland.

The world No. 6 tweeted on Tuesday: "Hey @united landed in Dublin yesterday morning from Newark and still no golf clubs... Sort of need them this week... Can someone help!?"

His plea sparked the airline into action and it promised McIlroy's clubs would be delivered to the tournament venue on Wednesday.

They were as good as their word and McIlroy posted a photo on Twitter saying: "Re-@united with my clubs!"

McIlroy is in good form after his recent victory at the European Tour's flagship event -- the BMW PGA Championship at Wentworth -- and a top 25 finish at the U.S. Open last weekend.

He has been paired with three-time major champion Padraig Harrington, from Ireland, for his first two rounds in Cork.