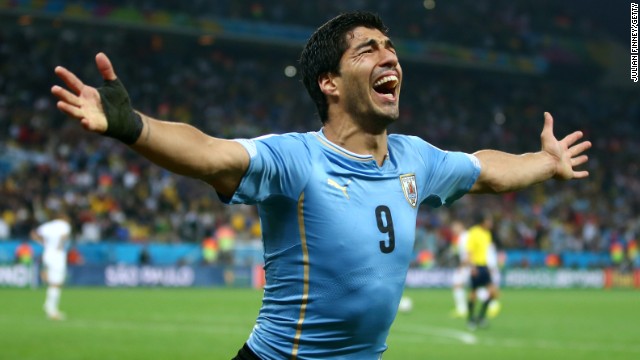 This barely four weeks are undergoing knee surgery to all but end England's interest in the 2014 World Cup and keep alive Uruguay's hopes of qualifying for the knockout stages.

It was a performance that Roy Hodgson's team were all too familiar with -- the Uruguayan scored 31 goals for Liverpool in the league last season -- but could do nothing about.

Equally it was a performance that must have been particularly tough on the five Liverpool players that started for England and especially for Steven Gerrard, who played an unfortunate part in Suarez's winning goal.

Suarez had watched from the bench as Uruguay stumbled to defeat in their opening match against Costa Rica but he didn't take long to make an impact against England.

Plenty of questions had been asked if Suarez could be 100% fit after missing a month's football, but if anything he appeared refreshed by his layoff.

A busy first half was capped with a goal six minutes before the break when Suarez headed past goalkeeper Joe Hart after Edinson Cavani's diagonal chip had split England's defense.

Suarez almost beat the Manchester City keeper again four minutes into the second half with a low inswinging corner.

Hart managed to bat the ball away off the line this time but should have been picking the ball out of the net three minutes later when Cavani was played through.

A goal seemed certain but the Paris St Germain striker conspired to squirt his shot wide.

The miss seemed to rejuvenate England who began to play their way back into the game.

Having headed against the bar in the opening half, Wayne Rooney, restored to his more favored central attacking role, forced a fine smothering save from Fernando Muslera in the 53rd minute and Daniel Sturridge also went close shortly after.

When the Manchester United striker side-footed home from Glen Johnson's cross England looked to have seized the initiative at a crucial time.

But it didn't last long as Suarez pounced on an error by his Liverpool teammate Gerrard in the 84th minute.

A speculative punt up field glanced off the head of the England captain and into the path of Suarez who steadied himself before lashing in his 41st international goal.

It was a goal that typified Suarez's predatory instincts, both in the finish but also the way he had almost expected that the ball would fall into his path.

Defeat leaves England pointless from their two opening matches. At the very least they will need to beat Costa Rica in their final match and hope other results go their way.

"I thought we had done enough to get a draw. Suarez's first goal was exceptional. The second he was bit fortunate to get himself free. We know what he can do."

Lucky or not, Suarez's winner puts Uruguay level on three points with Costa Rica and Italy who play in Recife on Friday.