World Cup: Argentina and Iran -- a time to remember? 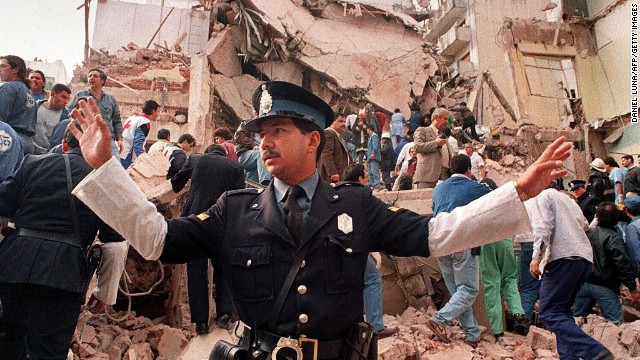 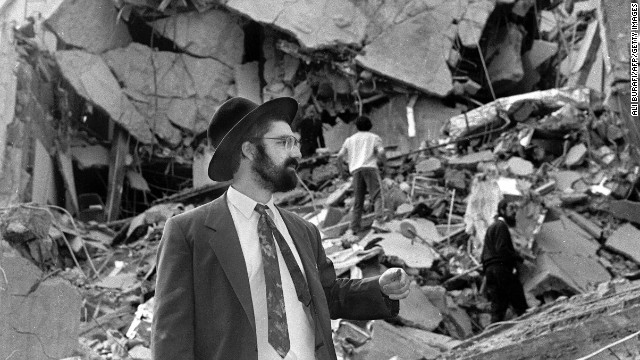 The incident occurred two years after a bomb was set off at the Israeli embassy in Buenos Aires, killing 29 and wounding 242. 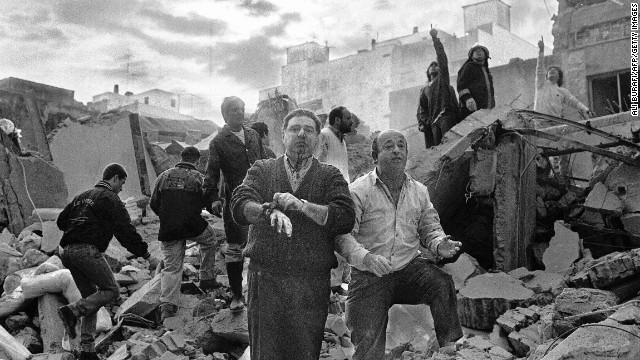 Firemen search as wounded people walk over the rubble left following the explosion. 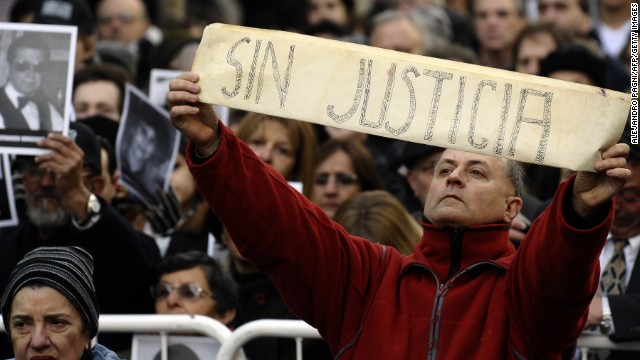 A man shows a placard that reads "Without Justice" amid people holding portraits of victims of the terrorist bombing attack on the commemoration of its 18th anniversary, in Buenos Aires on July 18, 2012. 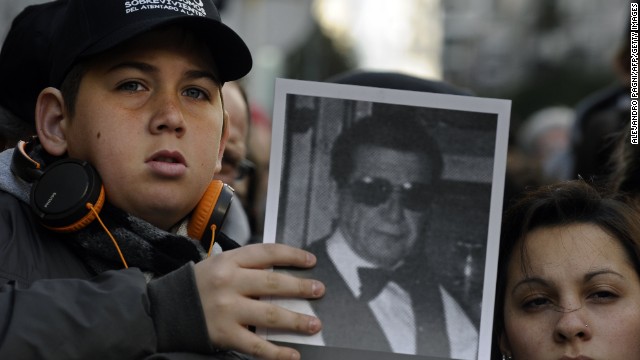 A boy holds a picture of a victim during a memorial parade in Buenos Aires in 2012. 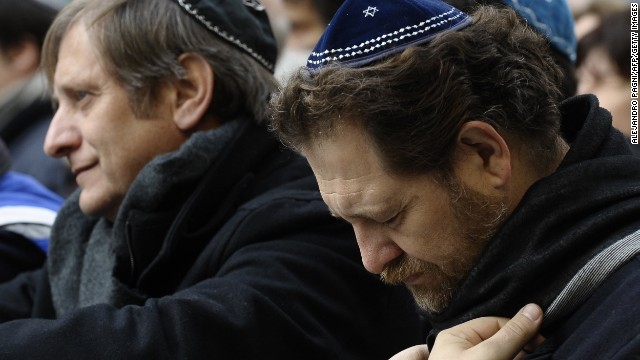 Thousands of mourners are expected to gather to remember the bombing on the 20th anniversary next month. 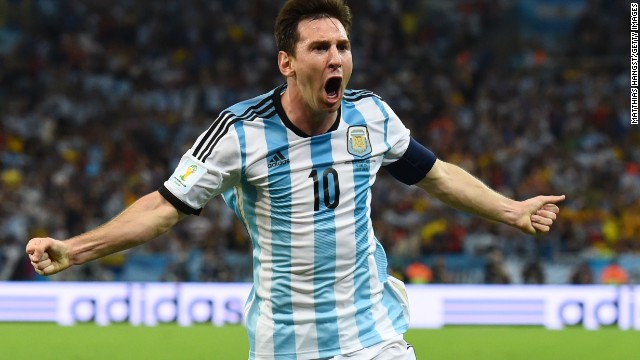 Lionel Messi, who scored in Argentina's opening victory over Bosnia and Herzegovina, will be aiming for more success against Iran at the 2014 World Cup.
HIDE CAPTION
Carnage
Rubble
Destruction
Never forgotten
Remembrance
Prayers
Hopes of a nation
<<
<

(CNN) -- Nearly 20 years have passed, but Diego Goldman still can't get rid of the sensation in his nostrils.

"Do you know what it smells like? I can still smell that smell -- the one of burning flesh."

It has been like that ever since the horrific day his mother woke him from his slumber with screams usually only heard in nightmares.

Quirky ways to save on World Cup lodging

"There were bodies everywhere," Goldman, who was 18 at the time, told CNN.

"But it's the smell which lingered. I can never forget. Never.

"I remember arriving and knowing that so many people who I knew were inside that building -- I knew so many of those who were murdered.

"It was chaos -- there was blood, flesh ... people didn't know what to do. Some couldn't stay and help, it was too difficult.

"But there were people I knew who would have been there. I can still see people's faces."

On Saturday, Goldman, like many of those affected by the bomb, will turn his attention to Argentina's footballers and their World Cup meeting with Iran -- the country blamed for the atrocity.

Argentine prosecutors accuse Iran of helping coordinate and plan the attack through a Hezbollah cell in the region. Nobody has claimed responsibility for the attack, and Iran vehemently denies any involvement.

It's the first time Argentina has faced Iran in football since that fateful day -- and its 250,000-strong Jewish community, the largest in South America, wants its dead remembered.

In a June 3 letter sent to FIFA president Sepp Blatter, the Latin American Jewish Community requests "at the beginning of this match, a minute of silence in memory of the victims, in commemoration of the 20th anniversary of the attack and all these years of impunity."

The move, which is unlikely to be successful as a spokesman for the global game's ruling body says it has not received a request from the Argentine Football Association, has brought fresh publicity to the search for justice.

As well as the smell of burning flesh, the image of bodies laid strewn across the ground remains a permanent fixture in Goldman's consciousness after the building, the heartbeat of the Jewish community in the Argentine capital, was reduced to ruins.

"You don't forget things like that," he says quietly.

"I stood there with boyfriends, husbands, wives, girlfriends, all of us digging and hoping to find a loved one.

"I could see people trapped but I knew if I took a wrong step, more rubble could fall upon them.

"Some people just couldn't handle it -- the smell was enough to turn a lot of volunteers away.

In February 2013, Argentine lawmakers agreed to work with Iran to investigate the attack -- a move which was met with skepticism.

The formation of a five-person panel -- named the "Truth Commission" -- was passed by a 131-113 vote following an intense 14-hour debate.

The move was struck down by the Federal Court, which ruled it unconstitutional, and a government appeal will now be heard in the country's Supreme Court.

In 2007, Argentina requested the arrest of several Iranians in connection with the bombing, including Iran's former defense minister Ahmad Vahidi.

While the request for a minute's silence on Saturday is unlikely to come to fruition, there will be a short remembrance service before the game on Rio de Janeiro's Copacabana Beach, where Israelis, Argentines and Jews from across the world are expected to gather.

One of those hoping to be present is Mariano Schlez, who has traveled from Buenos Aires to Brazil as part of a separate project aiming to connect Jewish football fans at the World Cup.

Schlez and his wife, Paola Salem, received a charity grant to help launch activities for Jewish supporters who are in Brazil for the tournament.

Many of them will attend the ceremony on Copacabana before watching the game, which is being played 216 miles away in Belo Horizonte.

"As Jews, we are always looking to show that we want to find justice," said Schlez.

"We see this game between Argentina and Iran as a great opportunity to tell the world that this case is still unresolved and there have been no convictions."

Argentina, which won its opening game against Bosnia, will begin as a heavy favorite against Iran on Saturday.

Led by Barcelona's four-time world player of the year Lionel Messi, Argentina is expected to reach the later stages and possibly even win the tournament for the first time since 1986.

But for many, a moment of silence before kickoff in Belo Horizonte would resonate loudest.

"We're asking for a minute's silence because it deserves to be respected," Goldman says.

"I think that the world should know that this was an act of terror which has impacted on both nations.

"We cannot allow ourselves to forget what happened."

For Goldman the memories remain raw -- and the smell refuses to go away.

Read: The plot to eliminate Brazil

Read: What went wrong for Spain?