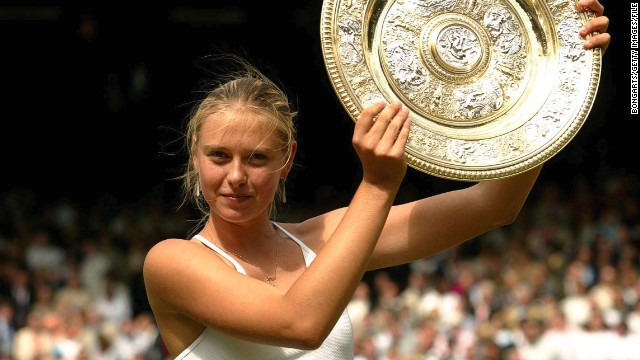 She arrived as the underdog, and left with a Wimbledon championship. It's 10 years since 17-year-old Maria Sharapova defeated Serena Williams in that final. It would be her first of five grand slam victories. 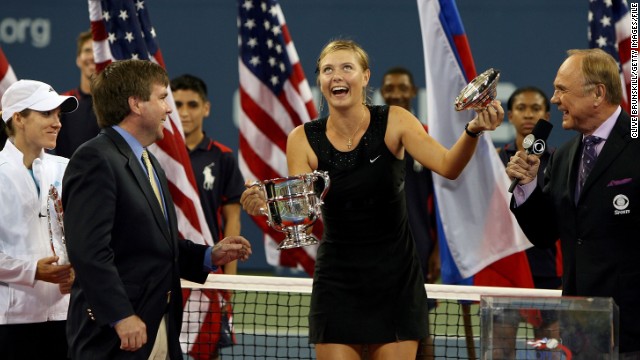 Sharapova has every reason to joke around -- in 2006 she won the U.S. Open final against Justine Henin. She finished the season ranked world No. 2, her best end-of-year finish yet. 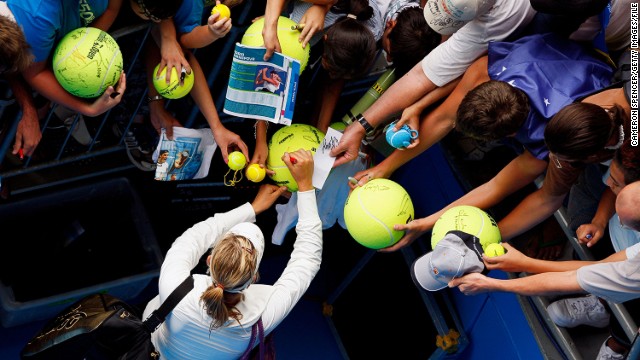 Fans scramble for an autograph from Sharapova at the 2008 Australian Open. She won in the final against Ana Ivanovic, having not dropped a set all tournament. 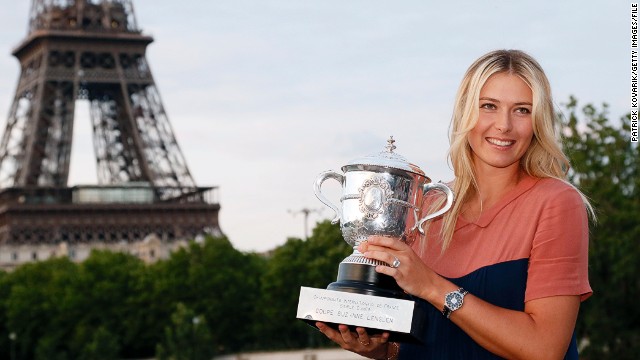 In 2012 Sharapova triumphed at the French Open for the first time, completing her set of grand slam titles. She also carried Russia's flag at the London Olympics, before winning a silver medal. 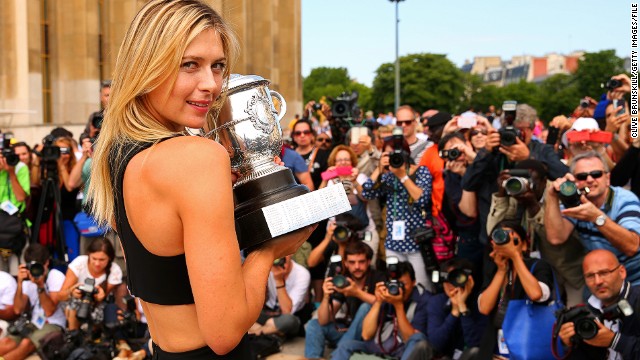 Two years later Sharapova regained her French Open crown. With Wimbledon on the horizon, can she claim two grand slams in one year for the first time? 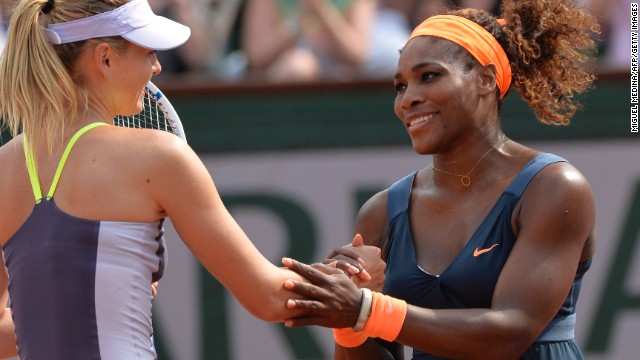 She will again be up against world No. 1 Williams, who beat her in the 2013 French Open final and is top seed at Wimbledon. 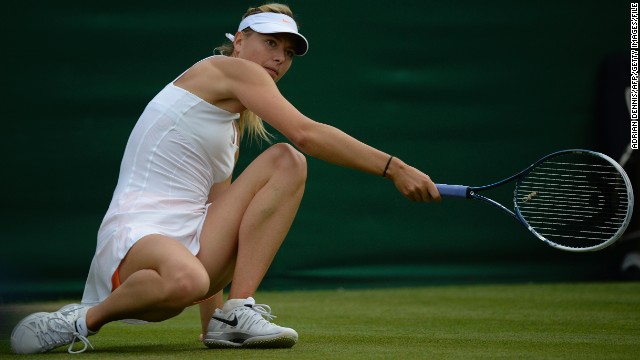 Sharapova has struggled to repeat her early success on grass. Last year she lost in the second round at Wimbledon to 131st-ranked Michelle Larcher De Brito. 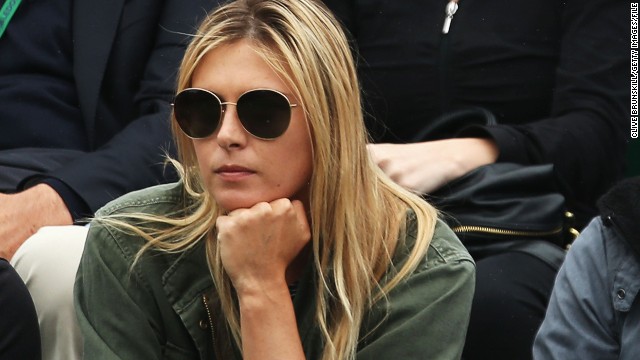 That defeat gave Sharapova the chance to support her boyfriend Grigor Dimitrov, who also lost in round two. 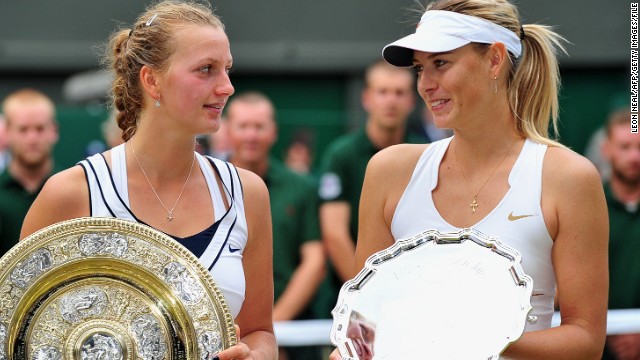 (CNN) -- It is 10 years since Maria Sharapova became the darling of Wimbledon's hallowed Center Court.

Just 17 and with a mere six grand slam appearances to her name, she was a huge underdog against Serena Williams -- then already a formidable force in women's tennis.

But Sharapova did the unthinkable, demolishing the defending champion and delighting the crowd, as the smiling teenager opened up her mobile phone on court to contact her mother.

It was "the jump start of my career, where it all began for me," says the first Russian woman to win Wimbledon.

"To think back that I was holding that trophy as a 17-year-old girl is really special. It really makes me feel really happy inside when I look back on those years," Sharapova told CNN's Open Court ahead of this week's return to London's hallowed grass courts.

"Of course it was a little bit of a blur, so young, I was in this incredible dream, this incredible run to the finals. And then winning it, it takes a while to realize, 'Yes, I've done it, I've accomplished that, I've won Wimbledon.' "

A decade later, the two women are again favorites to win Wimbledon -- even if the grass surface has not always proved a happy stomping ground for Sharapova in the intervening years.

She has reached the final just once since those heady days in 2004 -- losing to Czech surprise package Petra Kvitova in 2011 -- and made a shock second-round exit last year to Portugal's 131st-ranked Michelle Larcher de Brito.

Meanwhile, Williams has won three more championships in London in the past decade. 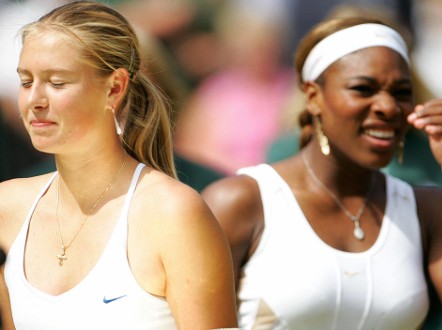 It's been 10 years since Sharapova and Williams faced each other in the Wimbledon final.
Getty Images

The dream for many fans is of a repeat Sharapova-Williams final showdown, but last Friday's draw means they could meet in the last eight.

"For both of us 10 years later to still be grinding, and working, and loving what we do -- I think it's really inspiring for a lot of people around the world because we've gone through a lot in those years," says Sharapova, who won her fifth grand slam title at this month's French Open, while Williams exited early.

"We've battled through injuries, through losses, through wins and we're still there."

Right now, Sharapova's confidence is sky-high -- though it wasn't always the case.

The five-time grand slam winner sacked coach Jimmy Connors last year after just one match together, which she lost.

Her new partnership with Sweden's Sven Groeneveld appears to be working out a lot better; in Paris she regained the title that Williams took from her the previous year.

But it was her first Wimbledon win that really set Sharapova on her way to global superstardom.

Within a week she was on the cover of Sports Illustrated and today banks about $30 million a year, of which barely a fifth comes from on-court prize money thanks to lucrative sponsorship deals with the likes of Nike and Head.

It makes her the world's highest-paid female athlete on Forbes' list.

"No matter how prepared you may be, I actually think it's better not to know what will happen," she says of her Wimbledon win.

"Because everything that comes your way seems so better and so much more when you don't have expectations and you have incredible opportunities,"

"I was not naive but I didn't know how cool these things really were and I think that is why I kept myself really grounded, because I was happy and I smiled and I had a great time doing those other things."

Today, Sharapova's every move on and off the court is followed by the press -- from her burgeoning business empire to her blossoming relationship with fellow tennis player Grigor Dimitrov, who won the Wimbledon warmup tournament at London's Queen's Club last week.

The Bulgarian -- nicknamed "Baby Fed" after comparisons with men's legend Roger Federer early in his career -- credited partner Sharapova for the victory. 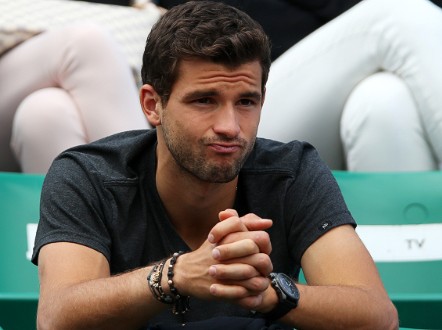 She appears similarly enthused by the 18-month romance.

"He's so talented out on the court and so smart at what he does. It's really inspiring to watch him play -- even when he doesn't have a good day and loses, I am really inspired by what he is able to produce out there," she says.

"It's really fun, we enjoy watching each other play. It is also always nice to have good company, that understands what you go through, the tough and the good. To be able to share that, I am certainly lucky."

In the last decade Sharapova has become a lucrative brand in her own right, signing a three-year advertising deal with Porsche last year among her many endorsements, and launching her own confectionery called Sugarpova.

Where does this business drive come from?

"I am actually really scared of doing nothing," she says.

"Because all my career, all my life I've woken up, made my tea or coffee and then am ready to do something, to commit to something.

"It has been tennis for many years and especially when I missed out a year from shoulder surgery, it gave me time to think 'well, this can happen on any given day and you cannot play sport anymore, what are you going to do?'" 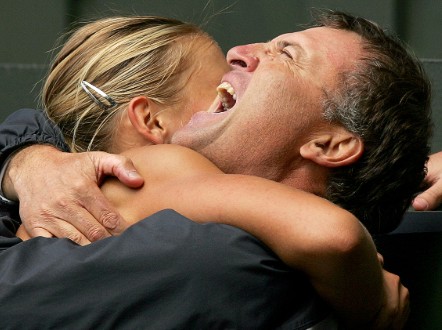 A tender moment as Sharapova embraces her father after Wimbledon win.
Getty Images

It might be hard to believe that the businesswoman leading this sporting empire, still sees herself as the teenage girl who climbed up to hug her father Yuri in the players' box after her Wimbledon triumph.

"I think from a very young age, I knew I didn't have so many strengths in my game," she says.

"I knew I wasn't the strongest athlete out there, I knew I didn't have an incredible amount of weapons out there but I knew from a young age that focus, especially in tennis, was one of the biggest weapons that you can have."

For the next fortnight, that focus is firmly on Wimbledon.

Read: The man behind Maria's millions