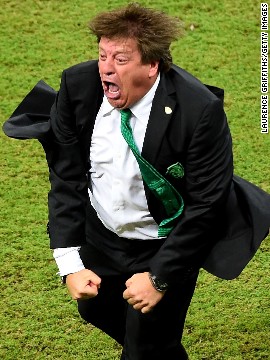 Miguel Herrera has taken touchline histrionics to new heights at the World Cup in Brazil, turning himself into an internet sensation in the process. And the Mexico coach has had plenty to shout about. 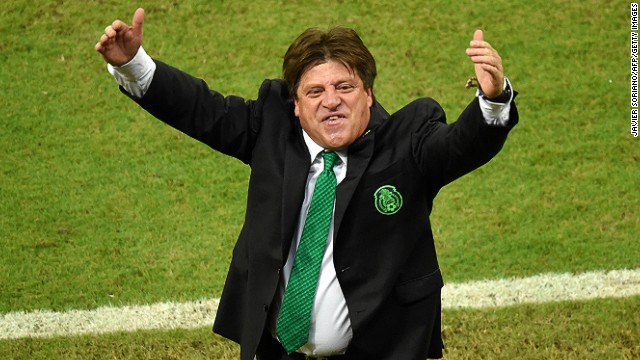 Herrera, who has 687,000 followers on Twitter, lives and breathes every second of the match on the sidelines and isn't slow to celebrate when his side finds the net. 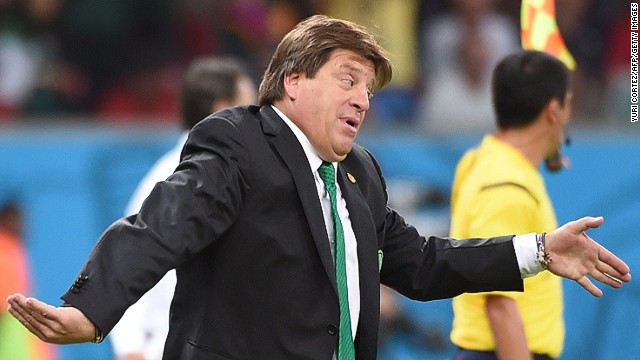 Herrera has led Mexico to the last 16 after victories over Cameroon and Croatia, and a draw with hosts Brazil. It has conceded just once. 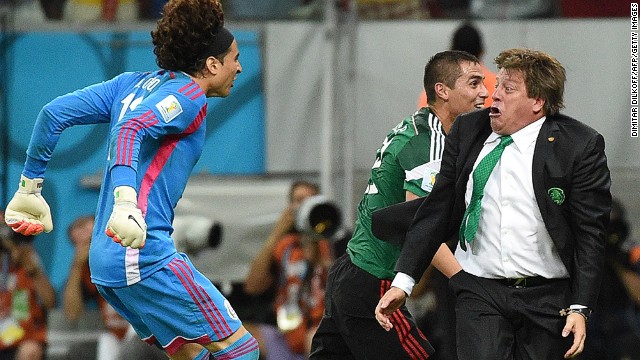 Herrera is clearly a hit with his players, judging by the number of times they ran over to celebrate with the coach after Mexico scored. Defender Paul Aguilar even knocked him to the floor with an exuberant hug. 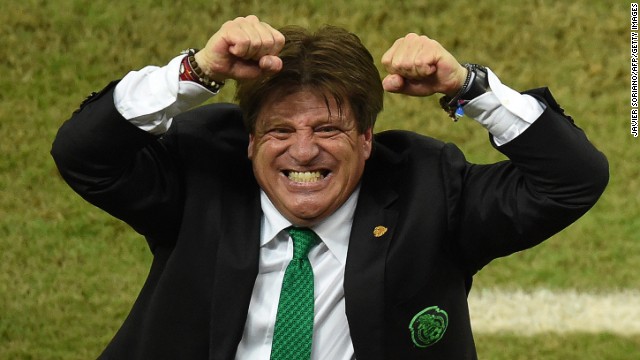 Mexico crushed Croatia on Monday night to secure its last 16 berth, and at one point needed just one more goal to usurp Brazil into top spot in Group A on goal difference. 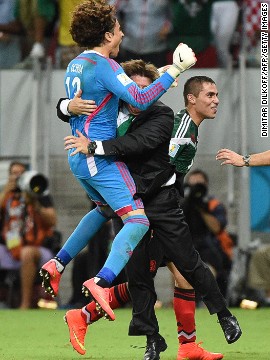 Herrera celebrates one of Mexico's goals against Croatia with goalkeeper Guillermo Ochoa. He later told a press conference Monday was "one of the happiest days of his life."
HIDE CAPTION
The Mexican
All hail Herrera
Easy come, easy go
Come here, you
Jumping for joy
Hug o'clock
<<
<

(CNN) -- The action on the pitch at the World Cup has been sensational -- but one man is engineering plenty of eye-catching scenes off it too.

The wild touchline antics of Mexico coach Miguel Herrera have fans the world over willing his team to score, just so they can revel in his reaction.

During Monday's 3-1 win over Croatia, which secured Mexico's place in the last 16, Herrera was his usual firecracker self on the sidelines.

Now social media is awash with clips of Herrera hugging his players, screaming at the officials or rolling around the floor celebrating a goal.

Every conversation you've ever had about which manager would be most fun on a night out has been ended by Miguel Herrera.

Herrera has had plenty to shout about too.

The 46-year-old took charge of the national team in October last year, with Mexico having struggled in their qualification group.

He guided Mexico through a playoff with New Zealand to secure a berth in Brazil and has transformed it into a confident, well organized unit.

Miguel Herrera on the sidelines should be a broadway show. I'd watch for years straight. #MEXvCRO

After beating Cameroon in its opening match thanks to Oribe Peralta's goal, it held hosts Brazil to a 0-0 draw in its second clash.

But Mexico exploded into life on Monday, putting three goals past Croatia, each strike prompting an even more exuberant reaction from its coach.

After one goal Herrera was even bundled to the floor by defender Paul Aguilar, picking himself up in time for a leaping hug with goalkeeper Guillermo Ochoa.

"That is one of the happiest days of my life," Herrera later told reporters at a press conference. "It was a hard fight, but my team pulled through. We felt as if we were playing at home in Mexico.

"We overcame the first hurdle. We're happy. We're going to celebrate tonight but tomorrow we have to start thinking of our match with the Netherlands."

Should Mexico make it past the Dutch, who thumped defending champions Spain 5-1 in their opening match, one can only imagine the new heights Herrera's histrionics will reach.