(CNN) -- No sooner had Luis Suarez appeared to have taken a 'bite' out of Giorgio Chiellini's shoulder, social media was already sinking its teeth into the Uruguay striker.

Suarez, who has previously been banned twice for biting, was accused by Italy's Chiellini of trying to have a quick nibble during the final stages of Uruguay's 1-0 World Cup victory. 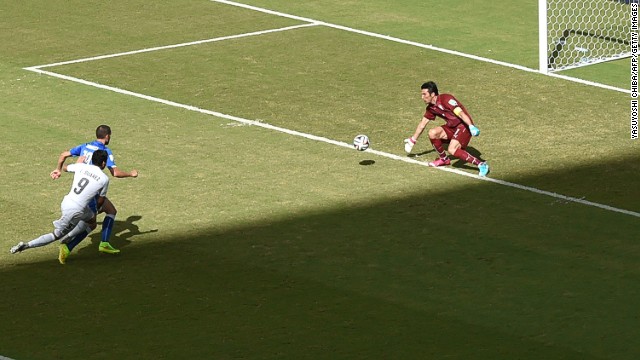 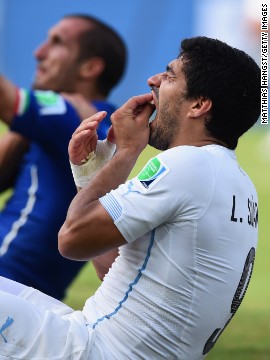 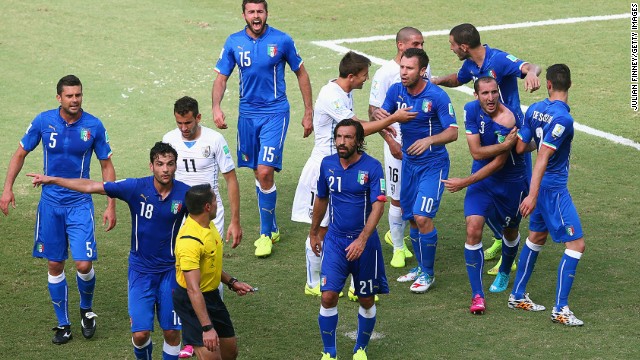 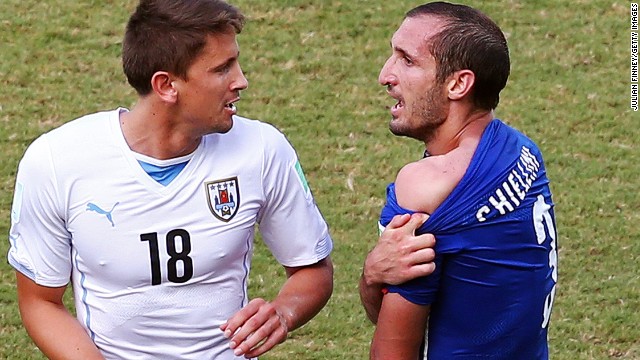 Did Suarez take a bite?

"Suarez is a sneak and he gets away with it because FIFA want their stars to play in the World Cup," Chiellini told Sky Sports Italia after the incident.

While the referee may not have witnessed the incident, millions across the world soon weighed in with their own opinions on the matter.

It was really a promo for Luis Suarez's new children's game. pic.twitter.com/w6JJddj5zx

Suarez ready for the next match: pic.twitter.com/BjXrZ5lXDC

The 27-year-old Liverpool forward might be left chewing over this one for quite a while given the volume of online activity.

Suarez was banned for 10 games in April 2013 after being found guilty of biting Chelsea defender Branislav Ivanovic.

He was also guilty of biting during his time in the Netherlands with Ajax where he was banned for seven games after leaving a scar on the collarbone of Otman Bakkal.

Suárez speaking to Helden Magazine (May 2014): "I feel so ashamed, biting an opponent twice," hasn't learned it seems pic.twitter.com/tCAtHzas0I

And Twitter users were quick to remind him of his former transgressions with even Major League Baseball getting involved.

Hey @luis16suarez, if you're that hungry, why not get your teeth stuck into something really tasty? pic.twitter.com/TPrPoC6ljt

McDonalds in his home country offered him a meal while he can always visit his local Nando's in Liverpool upon his return to England if he's short of a mouthful.

There was also a word for Suarez from someone who knows exactly what its like to have their ear bitten off -- literally.

I guess any part of the body is up for eating.

Evander Holyfield, the retired former heavyweight boxer once had part of his ear bitten off by opponent Mike Tyson during a fight in 1997.

And he was quick to throw a jab Suarez's way on Twitter.

What did you think of Suarez's actions? Tweet us your opinions @CNNFC using #CNNWorldCup or tell us on Facebook.

Reality bites, but Uruguay have their hero's back