5 things: What to watch for at the World Cup on Wednesday 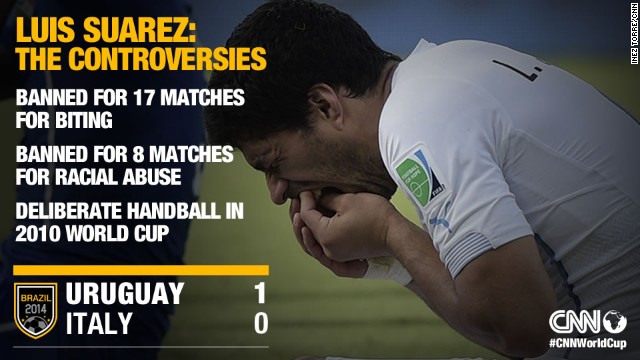 (CNN) -- They're hardly a global soccer powerhouse, but Iran's World Cup run has President Hassan Rouhani tweeting pictures of himself watching a game in a T-shirt.

If the Iranians can beat Bosnia convincingly on Wednesday, they might make it to the knockout stage of the World Cup for the first time ever.

That's one of five things we'll be watching for and talking about Wednesday:

Trying to get through:

a) Bosnia-Herzegovina vs. Iran

If Iran can beat Bosnia by more than one goal, and Nigeria loses to Argentina, Iran goes through to the knockout stage as the second-ranking team in Group F. The Middle Easterners have a good record against Bosnia. They've won four, tied one, and never lost.

Proud of our boys who secured our first point--hopefully the first of many more to come. #WorldCup2014 #TeamMelli pic.twitter.com/9pzyT1Dr3f

They've also put on an impressive display in Brazil this year. They haven't managed to win a match yet, but they held Nigeria to a 0-0 draw and kept Argentina from scoring for 90 minutes. Only a magically curving goal from Lionel Messi in injury time denied the Iranians a draw for the history books.

b) Argentina vs. Nigeria

Sitting at the top of the group, Argentina is guaranteed a place in the round of 16, while Nigeria will be battling to hang onto second place. If the Africans win, they go top of the group. If they pull off a draw, they get a point and hang onto second place. If they lose, they have to hope it's close, and that Iran doesn't score a big win over Bosnia.

a) Honduras vs. Switzerland

Honduras is out of the running, but any of the other teams in Group E could go through to the knockout stage, or, theoretically, be knocked out. Switzerlandwill be aiming for a big win to steal that second-place spot for themselves. The two sides played to a draw the only previous match they played against each other.

b) France vs. Ecuador

France is the safest, with six points and a six-point goal difference. So it would take a tremendous victory by Ecuador to knock the French out of the top spot. But the South Americans will be fighting hard, because they are struggling to hang onto their second place spot in the group. France beat Ecuador the only previous time they faced each other.

The fangs come out:

Uruguay's Luis Suarez is without doubt one of the best football players in the world. He's also the most controversial. Twice banned from games for biting opponents in the Netherlands and England, no one thought he would be dumb enough to bite someone on the biggest football stage of all. But he might have done just that in Uruguay's decisive match against Italy.

He definitely went face-first into Giorgio Chiellini, and the Italian defender quickly pulled his shirt off his shoulder, claiming he'd been bitten. Suarez said after the match that he "just collided with his shoulder."

World soccer's governing body FIFA is looking into the incident and could ban Suarez for up to two years.

The internet went nuts over the incident, with people comparing Suarez to Jaws and Dracula -- and worse.

Imagine how bad Suarez's bark is.

Group of Death -- but whose?

With three former World Cup champions, Group D was always sure to be the Group of Death, but the victims were hardly the ones anyone expected. Costa Rica was the only team in the group that has never won the tournament, but far from being sacrificial lambs, they turned out to be giant-killers, beating Italy and Uruguay. Tuesday they finished their unbeaten run by holding hapless England to a 0-0 draw. And that was the end of England's World Cup run.

Team USA is looking ahead to a make-or-break duel against Germany on Thursday, hoping to go through to the knockout stage with a win or a draw. If they lose, Ghana (or, less likely, Portugal) could sneak into second place in Group G.

The trash talk has already begun at the very highest levels: U.S. Ambassador to the U.N. Samantha Power is ready to put a bet down on the game with her German counterpart. At stake - beer!

.@AmbassadorPower As long as the beer is chilled & from #GER, we are in. A case on the @DFB_Team! And #KeepOnDreaming - only 2 nights left.