Is this the most boring inflight movie ever? 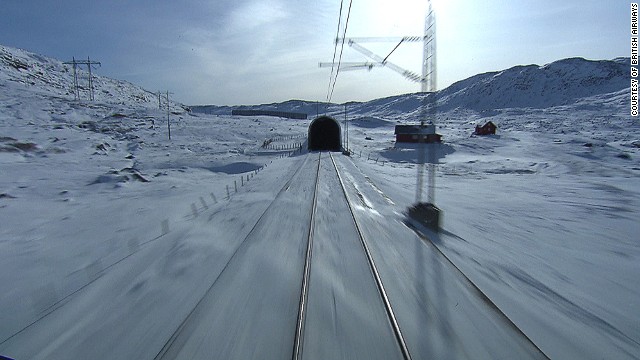 (CNN) -- A new standard may about to be set for the most boring in-flight movie ever -- and it doesn't even star Keanu Reeves.

Passengers flying British Airways will soon be able to zone out to a film that shows every inch of a slow-speed train journey to the Norwegian capital.

The airline says the film, "The Seven Hour Train Journey to Oslo," will appeal to people who enjoy "wallpaper" viewing experiences like the barely moving maps that chart flight progress.

The airline will start screening the feature in July alongside its usual schedule of classics, blockbusters and those lame romantic comedies that shouldn't make passengers bawl their eyes out, but inevitably do.

The film features no commentary to liven up the proceedings, but highlights are said to include going into tunnels and some children waving from a station. (CNN cannot independently confirm this, it doesn't have a spare seven hours to kill.)

Though undeniably tedious, the train ride film could prove an unexpected hit -- as it did when it first screened to more than one million viewers on Norway's NRK state television.

So-called "slow TV" has attracted a cult audience in Scandinavia, with other classics including a burning fireplace and a game of chess.

It goes without saying: winter nights are long in Norway, but so is intercontinental air travel.

"There's definitely a hypnotic, calming and entertaining quality to 'Slow TV' that is perfect for in-flight entertainment," says Richard D'Cruze, who oversees onboard movie programming for BA.

The airline says that if the trial proves successful it could follow up with more slow films featuring knitting and bird feeding.

Keanu Reeves should pick up his knitting needles and get dialing his agent right now.

What's the most boring in-flight film you've seen? Tell us below