Part of complete coverage on
Crossfire 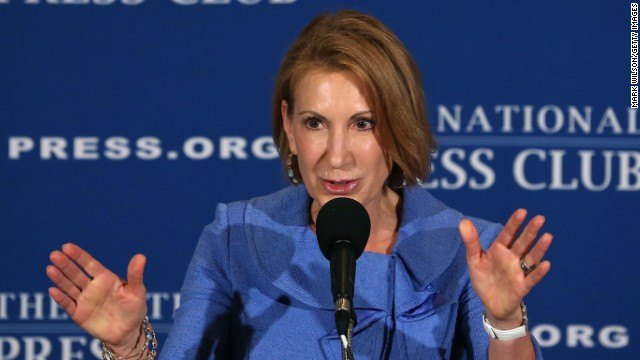 Carly Fiorina, former CEO of Hewlett-Packard, at an event in Washington, D.C. in 2013.
STORY HIGHLIGHTS

Editor's note: S.E. Cupp is co-host of "Crossfire," which airs at 6:30 p.m. ET weekdays on CNN. She is also the author of "Losing Our Religion: The Liberal Media's Attack on Christianity," co-author of "Why You're Wrong About the Right," a columnist at the New York Daily News and a political commentator for Glenn Beck's The Blaze. The opinions expressed in this commentary are solely those of the author.

(CNN) -- Today, former Senate candidate and Hewlett-Packard CEO Carly Fiorina announced a new initiative called the Unlocking Potential (UP) Project, which will organize conservative and Republican women in key states to educate and turn out voters.

According to Fiorina, the UP Project will engage women at the grassroots level to help conservatives close the gender and technology gap. It will utilize cutting-edge technology and techniques to target, persuade and turn out female voters in six key states with competitive 2014 Senate races: Colorado, Iowa, Michigan, New Hampshire, North Carolina and Virginia.

This morning, I spoke with Fiorina about the effort and whether or not she has any future plans to run for office.

S.E. Cupp: Is this a direct response to the Democrats' "War on Women" campaign strategy?

Carly Fiorina: Yes, exactly. And the idea really came to me when I spoke at CPAC earlier this year. In my speech, I took on the "War on Women" directly, and the response was overwhelming. I heard from so many women saying this is what they needed. It can help deliver their messages and provide resources to get them mobilized.

Cupp: It sounds like you're talking about dispatching an army of women to go door-to-door. I can't decide if that's a retro approach or a modern one.

Fiorina: Well, I think one of the things that we learned in both the Obama campaign and the tea party movement -- so, truly polar opposites -- is that they engaged people on the ground in a very personal manner, with personal outreach. And that's what works. And it particularly works with women. They are persuaded by other women they know.

Cupp: So, no parachuting in at the last minute, running an ad, and expecting women to turn out?

Fiorina: No. All the data says that people are most persuaded by people they know. We are going to engage people in the communities where they live and work, train them where they are, and measure the results so we know what's working. That matters a lot.

Cupp: So is it old-fashioned grass roots campaigning?

Fiorina: Well, it's modern in that we're using technology to train our messengers and broaden our messages. But the politics of personal relationships still matters the most.

Cupp: So Democrats will merely say, "Candidate X opposes the Paycheck Fairness Act. Candidate X is against women." It won't matter, by the way, if Candidate X is a woman herself. How should conservatives combat this?

Fiorina: I think in some cases we just have to take on the facts. There are plenty of laws in place today that a woman can look to if she's truly discriminated against at work, where she's actually earning less for the same job as her male counterpart.

So the Paycheck Fairness Act, the Lilly Ledbetter Fair Pay Act -- these are tokens. They're gestures. They don't truly help women advance.

We can't avoid the factual arguments, because they're on our side.

Fiorina: Absolutely not. Of course, there are some people -- men and women -- who truly vote on single issues. But they are not a majority, and certainly not a majority of women. Women make up 53% of the vote, and their views are as broad and diverse as are men's. Most women care about jobs and the economy, and the polls bear this out.

And you know, even when the issue is life and choice, most women think that abortion after five months is egregious.

Cupp: So what hasn't the GOP been doing right to target women voters?

First, all of the ads that run are very helpful, but they're not as helpful as an effective grassroots plan. Sometimes we talk at a high level about policies and principles, but we need to bring it down to a personal level. We talk a lot about less taxes and less regulation -- as principles. But if you're a single mom with two kids and you're trying to open a hair dressing shop, it's going to take you over a year to deal with all the regulations to do that, and you have a tax code that's thousands of pages long. You might get discouraged. We're destroying more businesses than we're creating in this country.

Fiorina: (Laughs) Sometimes men know these are sensitive, hot-button issues and so they're afraid to deal with them. And some, not many, really do put their foot in their mouth.

Cupp: Do Republicans need to nominate a woman to defeat Hillary?

Fiorina: I don't want to say that necessarily. If a woman emerges, that's terrific. But we can't let this ridiculous charge stand. We just can't. We have to deal with it head on for 2014, never mind 2016.

Cupp: Any plans to run again yourself?

Fiorina: You never know! I never close off any possibility in life. And when people encourage you to do it you have to think about it. But right now I'm focused on the UP Project and getting candidates elected for 2014.