What's in a handshake? In tennis, a lot 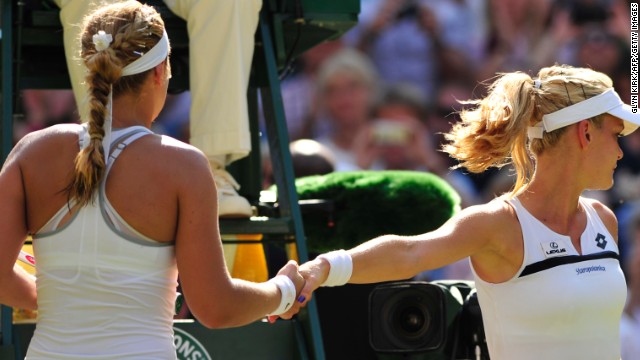 Sabine Lisicki, left, beat Agnieszka Radwanska last year to reach the Wimbledon final. But there was almost as much discussion about the handshake as the match itself. It's not the only contentious handshake in tennis history ... 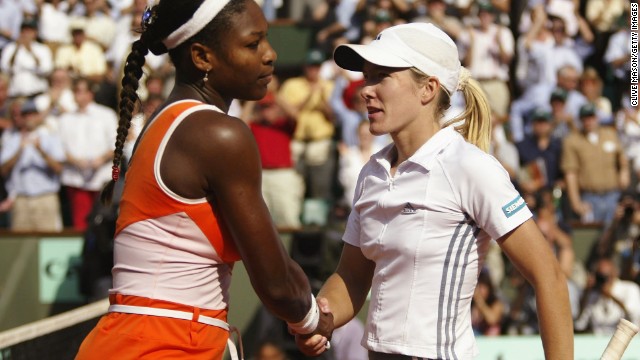 There was a rapid, no-look handshake between Serena Williams, left, and Justine Henin at the French Open in 2003. Henin won the match after a controversial incident on Williams' serve in the third set of the semifinal. 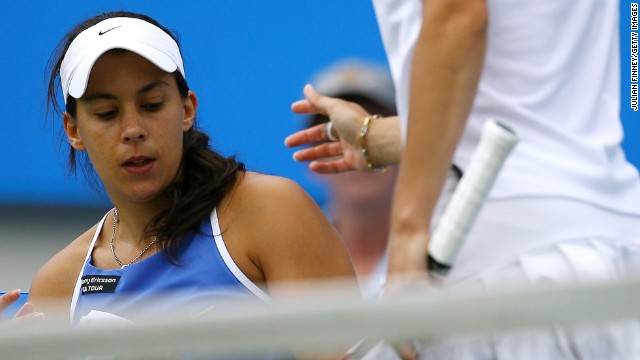 Sometimes there's no shake at all. That's the hand of Virginie Razzano. Marion Bartoli refused to shake it in a match in England in 2009. Razzano had earlier said that Bartoli -- who would win Wimbledon later in her career -- played up injuries to help her get an edge on opponents. Last year, there was another no handshake between French players. That featured Michael Llodra and Benoit Paire. 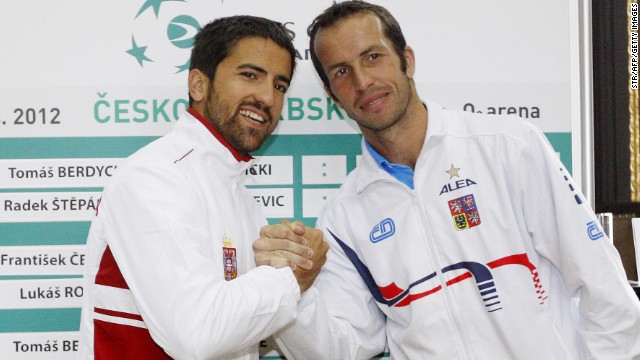 Janko Tipsarevic, left, and Radek Stepanek were all smiles prior to their encounter in the Davis Cup in 2012. But after their singles match, Tipsarevic claimed Stepanek gave him the middle finger during the handshake. 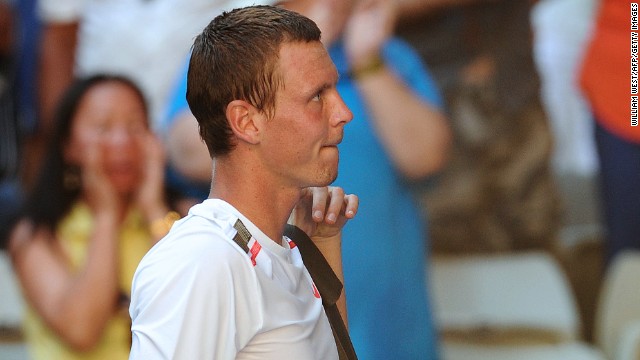 Tomas Berdych, Stepanek's fellow Czech, was loudly booed in Melbourne in 2012. He refused to shake hands with Nicolas Almagro after he thought the Spaniard hit a ball straight at him on purpose. 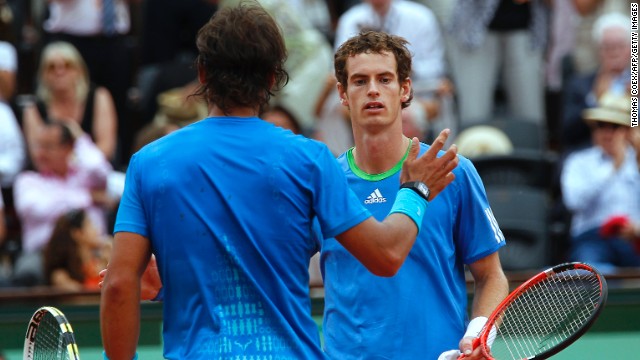 Of course in the overwhelming majority of cases players do shake hands at the net -- and without any problems. 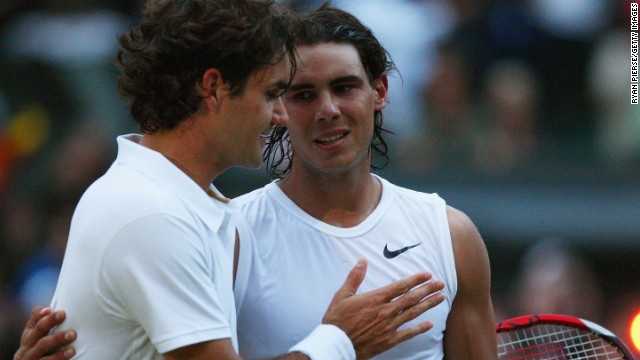 This is how Roger Federer, left, and Rafael Nadal met at the net after the 2008 Wimbledon final, widely regarded as one of the best matches -- if not the best -- in tennis history. 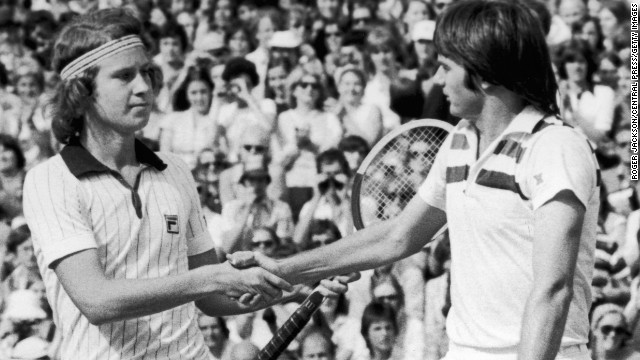 The actual type of handshake has evolved over the years, too. Here's the traditional shake offered up by John McEnroe, left, and Jimmy Connors at Wimbledon in 1977. 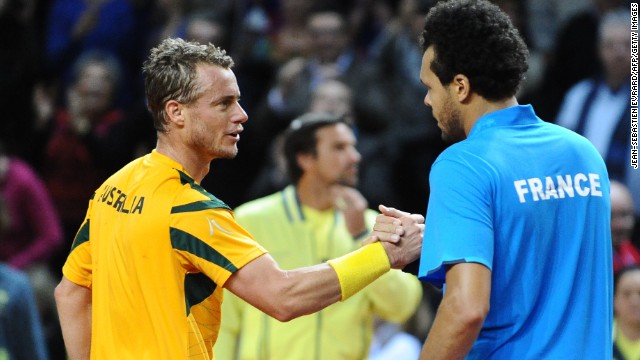 Nowadays players from both tours opt for the so-called arm wrestle handshake, considered a little warmer than the traditional shake. 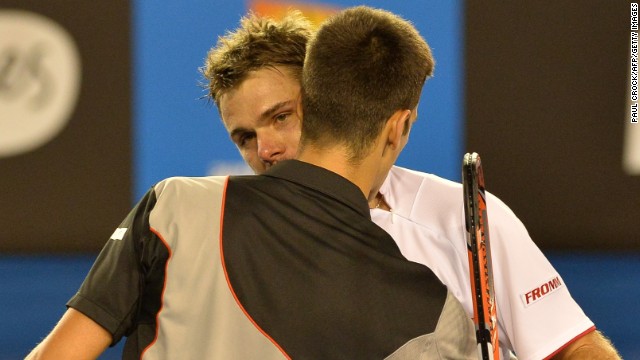 (CNN) -- It was a classic match on tennis' grandest stage -- Sabine Lisicki upended Agnieszka Radwanska 9-7 in the third set at Wimbledon last year to reach her first grand slam final.

But instead of being asked about turning points, forehands or backhands, the first three questions posed to Radwanska in the post-match press conference seemed to focus on the handshake.

The reason? Radwanska, a Pole, merely stuck out a hand and didn't look at Lisicki, the German with Polish roots. She was more preoccupied with getting to her chair and off Centre Court.

It reeked of bad sportsmanship, hardly a fitting farewell given the battle that had unfolded for nearly two-and-half hours.

"What could I do, just be there and dance?" Radwanska said. "I didn't feel like it at that point."

"I couldn't believe it," Navratilova said in her role as a pundit for the BBC. "I have never not looked my opponent in the eye after a match."

Brad Gilbert, the former top-five player and ex coach of Andre Agassi, Andy Murray and Andy Roddick, added in an interview with CNN: "That was definitely two people, two taxis."

Tennis fans, journalists and even players will tell you they keep an eye on the handshake, especially when something contentious happens during the match.

The handshake is mostly picked up by cameras -- and when it's not viewers aren't happy. In team sports such as football and American football, post-game handshakes and high fives don't command as much attention.

Radwanska - Lisicki's handshake goes directly to the list of the coldest ones ever btw.

"We viewers invest two, three or more hours following the highs and lows of the two individuals involved," Tom Tebbutt, a longtime Canadian tennis journalist and broadcaster, wrote in his blog for Tennis Canada last year.

"The handshake, and the walk up to the handshake, is an integral part of a tennis match. It's the joy of victory and the agony of defeat, it's all the emotions of the competitors summed up in a final ritual gesture. And we want to see it all -- uninterrupted."

The handshake isn't mandatory but it's extremely rare for players not to partake in the ritual.

Ivanovic on life after tennis

One such occasion happened two years ago at the Australian Open, when 2010 Wimbledon finalist Tomas Berdych snubbed Spaniard Nicolas Almagro. Berdych felt Almagro purposely struck him with a forehand, a claim the latter denied. Berdych was loudly booed when he left the court.

Marion Bartoli, the 2013 Wimbledon champion, refused to shake hands with French compatriot Virginie Razzano at Eastbourne in 2009 after Razzano accused her of gamesmanship.

Murray told CNN the lack of a handshake in the Berdych-Almagro tie made for entertainment. Some would say what happened between Serbia's Janko Tipsarevic and Berdych's fellow Czech, Radek Stepanek, in the Davis Cup in 2012 could be classified as entertainment, too.

Tipsarevic claimed Stepanek gave him the middle finger during the handshake.

Most of the time Murray's handshake doesn't waiver.

"When you're on court, it's a confrontation, a battle in a way," said Murray. "During certain matches players will earn your respect regardless of whether it's Roger (Federer), who is a great player, or someone that's ranked lower; if they play a great match against you or it's a young player that you think is really good."

Last year at the Australian Open, Federer appeared to swear at Murray during a five-set defeat but the Scot didn't think of not shaking hands. (Imagine the boos that would have rained down then.)

"There are certain things that happen in matches that when the match is done it doesn't necessarily influence how you feel about that person," said Murray. "Things in the heat of the moment, you understand that things can be said.

"Sometimes it's literally two minutes for you to cool down after something like that happens. Sometimes it can take weeks or months before that relationship is resolved.

"I've not really had a problem with anyone once I'd finished the match."

Wayne Ferreira, twice a grand slam semifinalist and the man who held the record for most consecutive majors played in the Open Era prior to Federer, liked to send a message with his handshake.

"Win or lose, I gave the guy the hardest handshake I could," the retired South African told CNN. "If I lost I gave him a hard handshake to tell him I'd be back the next time and if I won, to show him I was strong and played well.

Is Murray ready for the Australian Open?

"So for me I think it's important to show some strength in your handshake. If you go up and you've lost and you put a bad effort in the handshake it shows bad character."

The International Tennis Hall of Fame couldn't shed light on the origin of tennis handshakes. But it's known for certain that over the years, the type of handshake has changed, going from the traditional shake to the arm-wrestle or cup.

"There were a few handshakes early on but now it has just gone to the cups," Mahesh Bhupathi, a former doubles No. 1 whose 19-year career comes to an end at Wimbledon, told CNN. "I think the cup is a little more personal.

"Before you would cup with your friends and do the handshake with the guys you're not that friendly with. Now it's just the cup all around."

Where did the 'cup' come from?

Pam Shriver, a top-three player in both singles and doubles as part of a career that spanned the 1970s, 80s and 90s, recalled that Argentina's Gabriela Sabatini was among the first female players to employ the "arm-wrestle" shake.

Now, players even hug at the net, with Novak Djokovic seemingly a particular fan of the hug. He once swapped shirts with an opponent football style -- Ivan Ljubicic -- post match at the net.

"The game is getting so much more physical," said tennis historian and journalist Joel Drucker. "It could be headed for more hugs."

Shriver and Navratilova give the edge to the men when it comes to the better handshakes.

"We had plenty of cold handshakes in our day, men and women," said Shriver. "In fact I think women led by Chrissie (Evert) and Martina may have done it better than the Johnny (McEnroe), Jimmy (Connors) and Ivan (Lendl) era. Today the men are leading the way in genuine sportsmanship. All the top men set a great example."

But the cold handshakes -- and the chatter they create -- probably won't ever disappear.