Wimbledon: Andy Murray through to quarterfinals 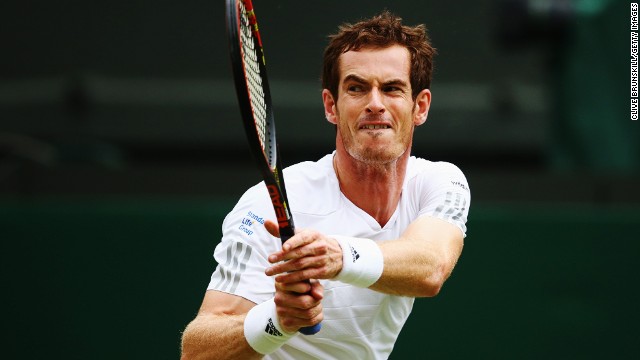 Andy Murray grimaces as he plays a backhand during his fourth round match against Kevin Anderson at Wimbledon. The defending champion won in straight sets 6-4 6-3 7-6 (8/6). 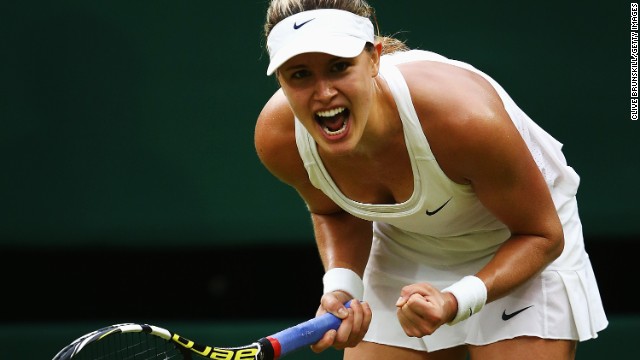 Eugenie Bouchard booked her place in the quarterfinals of Wimbledon after defeating France's Alize Cornet on Monday. 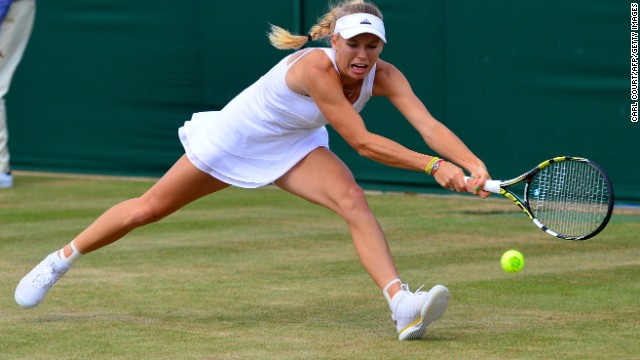 Caroline Wozniacki (pictured) was knocked out on Monday, beaten 6-2 7-5 by the Czech Republic's Barbora Zahlova Strycova. Victory propels the world No. 43 into her first ever grand slam quarterfinal. 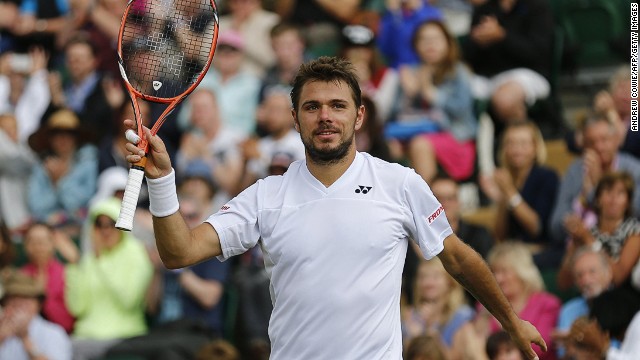 (CNN) -- Andy Murray's impressive defense of his Wimbledon title continued Monday as he dispatched 20th seed Kevin Anderson in straight sets in their fourth round match on Centre Court.

It was always going to be a tall order for the 6 foot 8 inch South Africa to overcome the Scot who once again looked fit and focused in front of an expectant crowd.

Murray engineered a break of serve in the third game of the match before serving out a competitive first set 6-4.

Murray stormed into a 3-0 lead in the second before the heavens opened and the players left the court while the roof was closed.

When they resumed, it was Anderson who began more brightly earning two break points on the Murray serve.

He saved the first but could do nothing with the second as an Anderson pile driver took a heavy net cord with the Scot unable to get up to the ball.

No bother. Murray was still a break up and in no mood to slip up again. Games went with serve up until the ninth when Anderson, serving to stay in the set, lost four points in succession to give Murray a two-set lead.

Anderson's booming 130 mph-plus serve had delivered 63 aces in the first three rounds but he could only manage a further nine on Monday.

The third set was tighter. Murray earned five break points in the eighth game but couldn't close out and with the chance gone the set went to a tiebreak.

Like the set, it was nip and tuck with Anderson earning the first set point at 6-5 only for Murray to save it, win the next point and earn his first match point.

"When it was outdoors, I played very well and was in a good position. When we came back indoors, he started to strike the ball a bit better, he started serving better," Murray said afterwards.

"It's a good win because he was playing well at the end and making it very tough for me. It's good to get through in straight sets."

The 11th seed Grigor Dimitrov awaits the world No. 5 in the quarterfinals.

The Bulgarian, who won the Queen's Club event prior to Wimbledon, was also a straight sets winner defeating Argentina's Leonardo Mayer 6-4 7-6 (8/6) 6-2.

No. 1 seed Novak Djokovic is also safely through to the last eight after negotiating a potentially tricky tie with France's Jo-Wilfried Tsonga.

Djokokic won in straight sets with the almost identical scoreline to Murray, who he followed onto Centre Court.

The 20-year-old Canadian, a junior champion at the All England Club in 2012, booked her place in the quarterfinals Monday following a straight sets win over France's Alize Cornet.

Bouchard, who prevailed 7-6 7-5, will face either Maria Sharapova or Germany's Angelique Kerber for a place in the semifinals.

The 13th seed has reached the last four of the previous two grand slams and is confident following her victory over Cornet, who had defeated World No.1 Serena Williams in the previous round.

"I'm really excited. I'm proud of the way I fought out there," Bouchard told the tournament's official website.

"Alize is a really great player. It was tough (under the roof), but it was the same for both of us. I need to focus on one match at a time, so that is my focus. This is what I've worked for, but I want to keep winning matches."

Elsewhere, Caroline Wozniacki's Wimbledon dream came to shuddering halt after she was dumped out in the fourth round Monday.

The former World No.1 was beaten 6-2 7-5 by the Czech Republic's Barbora Zahlova Strycova, who qualified for her first ever grand slam quarterfinal.

World No. 43 Strycova, who defeated Australian Open champion Li Na in the previous round, will now face either fellow Czech and 2011 champion Petra Kvitova for a place in the last four.

"I'll go back and practice. I'm motivated for the rest of the year. There's a lot to be played" - @CaroWozniacki pic.twitter.com/6XiuPBJfCC

"Even when I had some opportunities I made some stupid mistakes or didn't play the balls properly. You know, it was kind of, I guess, one of those matches," Wozniacki, the Dane, seeded 16 at Wimbledon, told reporters.

"Of course I am a little disappointed sitting here. Obviously I would have loved to have been further.

"The fourth round has been the furthest I have got here, where I feel like I should have gone further some years, but, you know, I guess sometimes that happens.

"You just have to get yourself back up and keep working and come back next time."

Another Czech to reach the quarterfinals is Lucie Safarova who booked her place in the last eight following a comfortable 6-0 6-2 over compatriot Tereza Smitkova.

Qualifier Smitkova, ranked 175th in the world, was dispatched in 48 minutes to set up a clash with either Agnieszka Radwanska or Ekaterina Makarova of Russia for a place in the last four.

There was disappointment for Madison Keys, the final U.S. woman in the singles draw after she was forced to withdraw from her third round tie against Kazakhstan's Yaroslava Shvedova with injury.

The 19-year-old, who won the Eastbourne tournament in the lead-up to Wimbledon, failed to recover from a thigh problem which she suffered on Saturday while trailing 6-7 6-6.

"I have a muscle strain in my abductor. It's not terrible, not really a long recovery time," Keys told reporters.

"But they were warning me it could get worse, make recovery time even longer."

Keys' injury means that Shvedova moves into the last 16 where she will play Germany's Sabine Lisicki.

While rain prevented several matches from starting on time, there were some who managed to beat the clouds.

In the men's draw, Australian Open champion Stanislas Wawrinka reached the fourth round for the first time since 2009 following a straight sets win over Uzbekistan's Denis Istomin.

The Swiss ace, ranked fifth, eased to a 6-3 6-3 6-4 win to finish off the rain-affected match which had originally been scheduled for Saturday.

Also into the fourth round is Japan's Kei Nishikori who overcame Italy's Simone Bolelli in a five-set thriller.

Kei Nishikori salutes his fans after advancing to the 4th round at #Wimbledon for the 1st time pic.twitter.com/EQhg4YqWYv

Nishikori's next opponent will be Canadian eighth seed Milos Raonic.

Read: What's in a handshake? In tennis, a lot