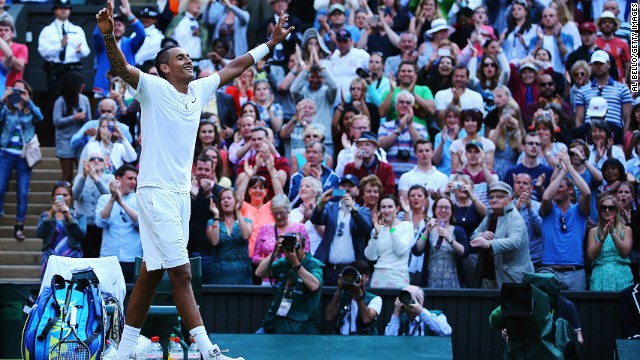 (CNN) -- To the list of names that contains Lukas Rosol and Steve Darcis, Nick Kyrgios can be added.

The Australian teenager is the latest unheralded player to force Rafael Nadal out of Wimbledon before the quarterfinals have even landed.

Nadal may be a two-time champion at Wimbledon but his reputation on grass has taken a battering in recent years.

Vanquished by Rosol in the second round in 2012, it was the first time the Spaniard had failed to get into the third round since 2005.

The following year Belgium's Darcis compounded his misery, knocking Nadal out in the first round for the first time ever.

Nadal survived Rosol on his way to the last 16 this time around but there was another giantkiller waiting for him on the grass.

Wimbledon debutant Kyrgios did the unthinkable and knocked the world No. 1 and 14-time grand slam champion out in four sets.

"I think I was in a bit of a zone out there," he told reporters after setting up a last-eight clash with Canadian eighth seed Milos Raonic, who beat Japan's Kei Nishikori 4-6 6-1 7-6 6-3.

"I didn't really notice the crowd. It hasn't really sunk in at all," Kyrgios added.

"I played some extraordinary tennis. I think you've got to believe you can win the match from the start.

"So many emotions, I sort of didn't know what to do, drop to the ground, throw my racket!"

There was another shock, for another reigning French Open champion in the women's draw.

It's 10 years since Maria Sharapova won Wimbledon -- and she won't be ending her drought any time soon.

The world No. 5 was sent packing on Centre Court by Germany's Angelique Kerber in a tense three-set affair.

Sharapova saved six match-points at 4-5 down and had opportunities to level the final set at 5-5.

But Kerber finally took her chance on the seventh match point to bring a thrilling finale to a pulsating encounter.

"It's unbelievable," Kerber told the BBC.

"We were playing on a really high level -- every single set was so close.

"I'm just so happy I won. She's a great player, she plays so great on grass. I said to myself believe in your game, hit the ball, be aggressive. In the end, it worked."

In the other half of the women's draw, Lucie Safarova ensured there will be a Czech player in this year's final.

Safarova, seeded 23, defeated Ekaterina Makarova 6-3 6-1 to set up a semifinal clash against either 2011 champion Petra Kvitova or the in-form Barbara Zahlavova Strycova.

Meanwhile, Roger Federer secured his place in the quarterfinals with relative ease.

This is the 1st time in history that two Swiss men have reached the #Wimbledon QF. And they face each other... pic.twitter.com/LZMbzFpVWs

"It will be amazing to play Stan in the quarterfinals here, hopefully on Centre Court, because things like that don't happen too often in Swiss sport," Federer told the BBC.

"But I'm pleased with the way I am playing. I'm serving and moving well and all the things are happening that need to be happening to go deep in the tournament."

Wawrinka, now the Swiss No. 1 after many years in Federer's shadow, claimed a 7-6 7-6 6-3 win to reach his second Wimbledon quarterfinal.

Federer needed just 21 minutes to win the first set 6-1 against Robredo before wrapping up the second 6-4.

Robredo, seeded 23, simply had no answer and Federer closed out the match by taking the third 6-4.

The German prevailed 6-3 3-6 6-4 to set up a last eight tie with number three seed Simona Halep of Romania.

Halep, the highest ranked player remaining in the draw, Zarina Diyas of Kazakhstan 6-3 6-0.

"I'm not surprised that I play a quarterfinal tomorrow," Halep told reporters.

"I'm third in the rankings so I have to be here in the quarterfinals. I've played really well and I have confidence in myself.

"I deserve to be here because I'm working hard every day and it's normal to be in the last matches of tournaments and grand slams."

#Serena consulting a tournament doctor after the warm-up in her doubles w/#Venus vs Barrois/Voegele #Wimbledon pic.twitter.com/tDaeGeaJOw

In the women's doubles, Serena Williams was forced to retire from her match with a viral illness.

Williams, playing alongside sister Venus, required lengthy treatment from the doctor and trainer before the game against Switzerland's Stefanie Voegele and Germany's Kristina Barrois.

She decided to play following the warm-up but in her first service game, she served four double faults and retired with the score at 0-3.

In a statement issued by the WTA Tour, Williams said: "I am heartbroken I'm not able to continue in the tournament. I thought I could rally this morning, because I really wanted to compete, but this bug just got the best of me.

"I want to thank my sister, Kristina, Stefanie and our teams for their support. We were all looking forward to a great match.

"From the bottom of my heart, I thank all of the fans for their cheers and understanding. I look forward to returning to Wimbledon next year."

Read: What's in a handshake?