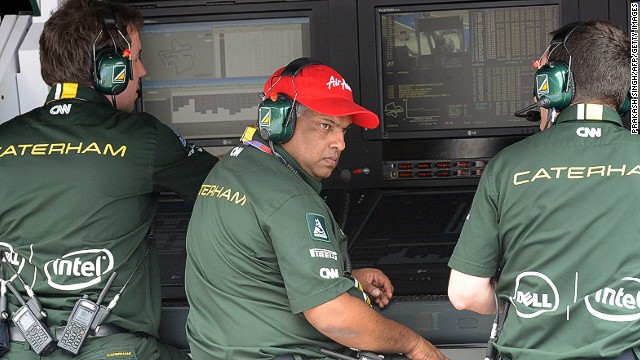 Tony Fernandes' four-year stint in Formula One is over after he sold Caterham F1.
STORY HIGHLIGHTS

(CNN) -- The Formula One team never to have won a point has new owners.

Caterham F1 has been sold by Tony Fernandes and his partners to a consortium of Swiss and Middle Eastern owners, who are led by former Midland and HRT F1 principal Colin Kolles.

Under the terms of the deal, the team will continue to race as Caterham F1 and will retain their base at Leafield, 75 miles north west of London.

It will be run by former Dutch F1 driver Christijan Albers, who will be assisted by Manfredi Ravetto, replacing current team principal Cyril Abiteboul.

Taking a spin around the Red Bull Ring

"We are aware of the huge challenge ahead of us given the fight at the bottom end of the Championship and our target now is to aim for tenth place in the 2014 Championship," said Albers in an official statement.

"We are very committed to the future of the team and we will ensure that the team has the necessary resources to develop and grow and achieve everything it is capable of."

It ends a four-year stint in the sport for Fernandes, who combined his role at Caterham with being chairman at football club Queens Park Rangers, who recently were promoted to the English Premier League.

We are delighted to confirm that we have new owners and a new management team in place. Read all about it here http://t.co/A72ArcuaKf

Caterham, who are sponsored by CNN, finished bottom of the constructors' championship in 2013 and are struggling again this season.

Their drivers -- Japan's Kamui Kobayashi and Marcus Ericsson, of Sweden -- are yet to register a point after eight races.