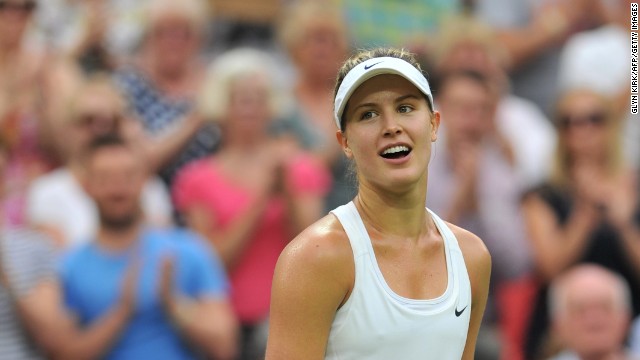 Eugenie Bouchard reached the semifinals of the Australian and French Opens earlier this year.
STORY HIGHLIGHTS

(CNN) -- Eugenie Bouchard has already established herself as the new face of women's tennis -- and now she's just two wins away from claiming her maiden grand slam title.

The 20-year-old, who is set to move up to No.8 in the world following her 6-3 6-4 win over Germany's Angelique Kerber, will equal the best ever ranking held by a Canadian on the women's tour.

Bouchard, who reached the semifinals of both the Australian and French Opens earlier this year, saw off Kerber to set up a semifinal clash with Romania's Simona Halep.

World No.3 Halep -- the highest ranked player remaining in the tournament, won the only meeting between the pair Indian Wells earlier in 2014.

"It was definitely a tough battle," Bouchard told the tournament's official website following her victory.

"I've played her a few times and it's always been really tough. I knew it wasn't over and I just kept trying to fight.

"I was trying to stay in the moment, I knew I couldn't think ahead, I've been working on that. I hit a good few aggressive shots, so I just tried to play my game."

Halep, who was beaten in the final of the French Open by Maria Sharapova, cruised through to the last four with a straight sets win over Germany's Sabine Lisicki.

"I'm happy I could pull it out. I'm excited but I want to go one step further, for sure" - @geniebouchard #Wimbledon pic.twitter.com/WpACd4G0Bf

And she stormed through the second -- taking it 6-0 after winning 11 consecutive games.

"It was a good match. I had a slower start today and she had 4-1 and then I came back very well," Halep told the BBC.

"I was really enjoying myself, it was incredible on Centre Court. It was my second time here and I really enjoy every moment."

Bouchard and Halep will meet on Thursday for the right to play either Lucie Safarova or Petra Kvitova in Saturday's final.