Skate it like Beckham: Polio survivors play football on wheels 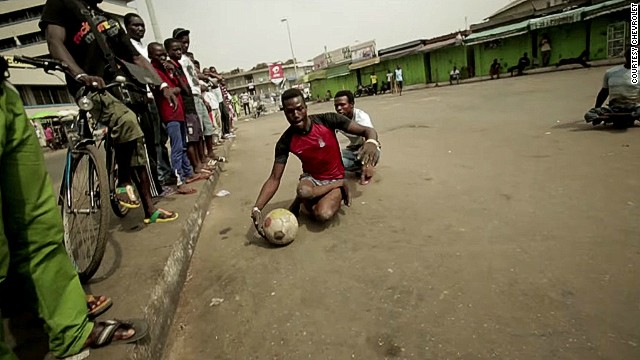 The Rolling Rockets, made up of polio survivors, are a Ghanaian skate soccer team. 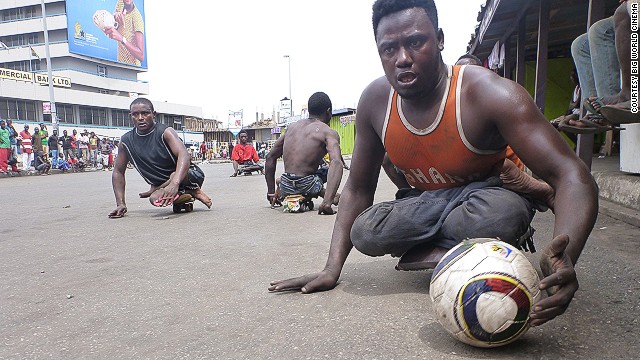 The players meet every Sunday at an abandoned taxi stand in Accra, the nation's capital. 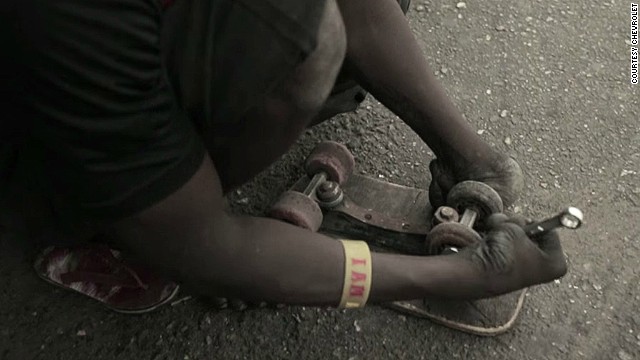 As the players are polio survivors, many have limited use of their legs. They instead play the game on homemade skateboards. 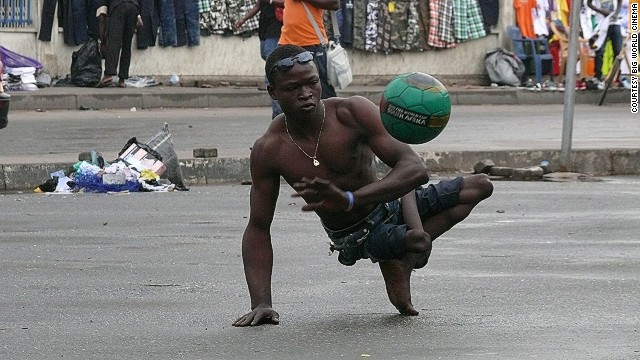 The team's coach, Albert Frimpong, hopes the sport will one day have a category in the Paralympic games. 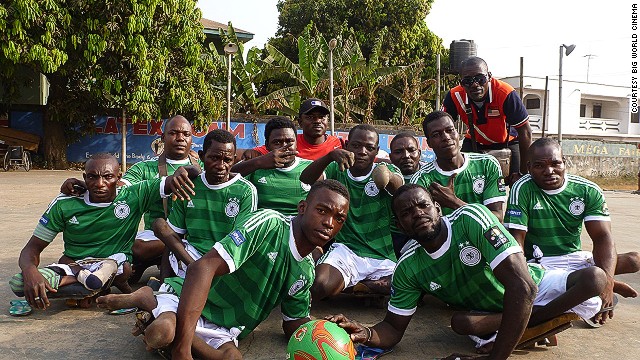 Frimpong (back) hopes to one day find a sponsor. He introduced the game in Accra to help better the lives of the city's impoverished polio sufferers. 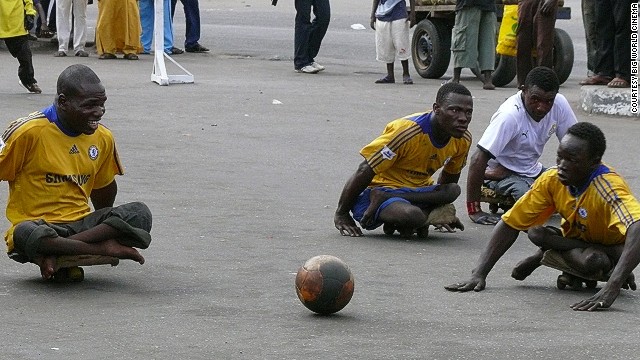 During the week, many of the players beg in the streets for money. 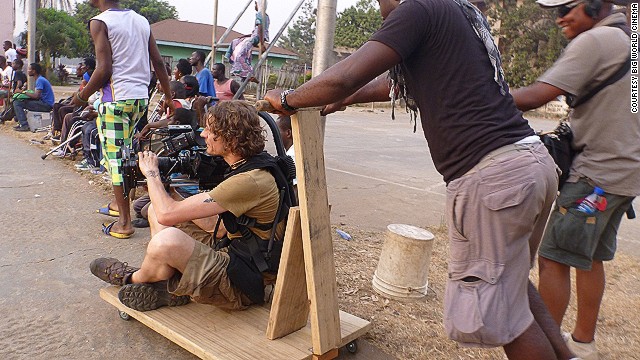 The team has attracted a lot of international attention. South African film studio Big World Cinema is in the process of making a documentary about the team called Rollaball. 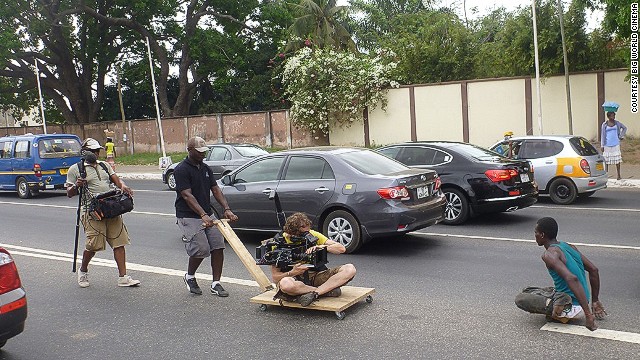 The film's director, Eddie Edwards says bystanders didn't always understand why he would be filming the men. 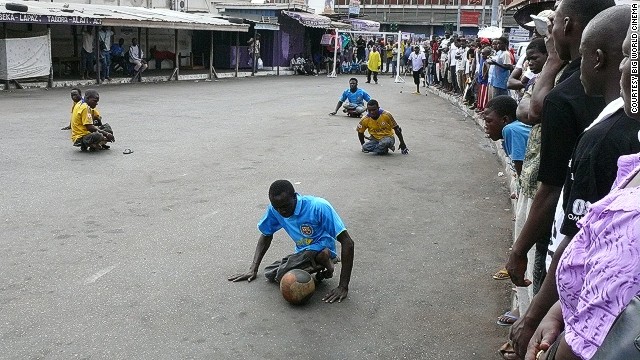 Though many ignore the men when they see them begging in the streets, the Rolling Rockets' Sunday games can attract hundreds of spectators. 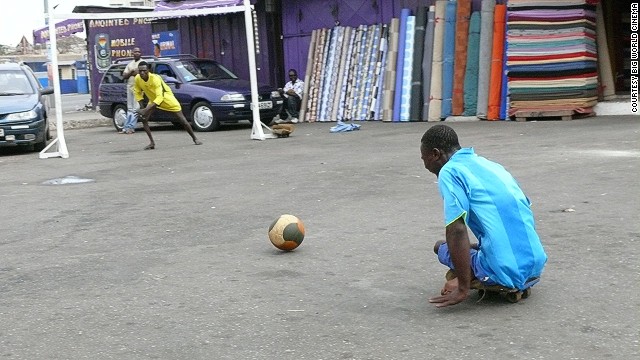 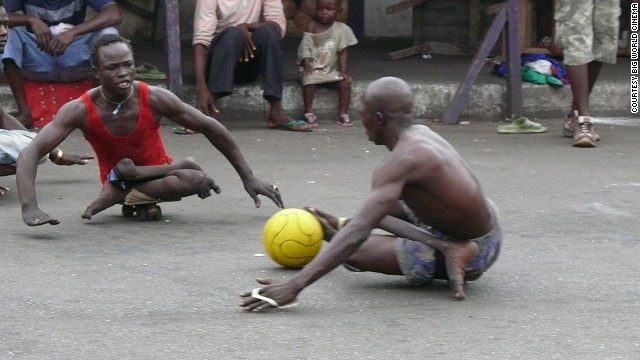 The Chevy spot was launched to coincide with the World Cup, as well as the recent announcement of their Manchester United sponsorship. 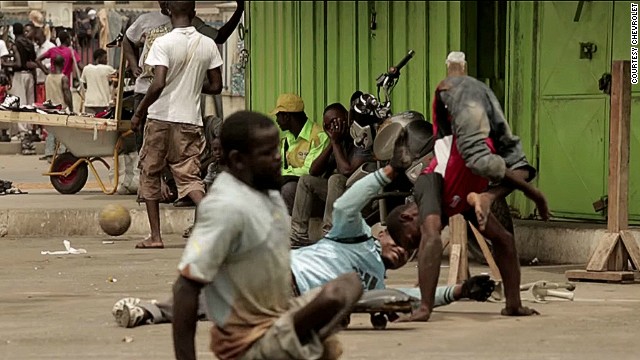 Inside Africa takes its viewers on a journey across Africa, exploring the true diversity and depth of different cultures, countries and regions.

(CNN) -- Polio victims are not an uncommon sight in Accra. The poorest of them often make a living from begging, weaving through the Ghanaian capital's traffic on homemade skateboards, seeking handouts from passing motorists. It's not an easy life.

"Going amongst the cars, it's very dangerous," attests Aminu Yaro, aka Smallee, a polio survivor who moved to the city from Niger.

"Some drivers' brakes might fail and the car could run you down."

While during the week, many choose to ignore these men, and the deftness they exhibit when navigating the roads, on Sundays, Ghanians turn up in the hundreds to watch them play a sport that could one day be a hit on the Paralympic circuit: skate soccer.

"When Saturday comes, I go to sleep early, because I know tomorrow morning I'm going to play ball," says Yaro.

Yaro is a member of the Rolling Rockets, a team of about 40 polio survivors. As many have limited use of their legs, the men play their version of soccer on skateboards, and hit the ball with their hands.

For Albert Frimpong, the team's coach and sole financier, skate soccer is more than just a game -- it's a potential means to get these men off the streets.

"Initially, the idea was to get them to stop begging, to improve their lives. I was hoping to use the soccer as a way to set up business- and income-generating projects for them," says Frimpong.

Read: This is the world's toughest bike race

As an able-bodied man, Frimpong says that the first challenge was getting the men to trust him.

"Every time they saw me approaching, they would vanish," he recalls. "People have exploited them for so long, they thought that I was going to do the same."

Since starting the team nine years ago, Frimpong says he has nearly bankrupted himself, paying not just for equipment and transportation, but for the men's food and medicine.

"It got to the point that I ended up owing so many people money, some took me to the police station," he says.

"I took upon myself something bigger than me. But the game has progressed and there's joy in the lives of these people."

Frimpong's ultimate dream is to purchase some land and set up a community where the men could train, farm and earn an honest living.

Last month, Chevrolet released Rolling On, a short documentary about the team that makes up part of a digital and social media campaign around the World Cup and the car company's Man United sponsorship. Chevrolet enlisted award-winning director Baff Akoto to create the spot.

"The dynamics of the game might be different, but there's as much athleticism, grace, skill, commitment and kamikaze enthusiasm as in any able-bodied game."

In 2012, the story of the Rolling Rockets inspired a Kickstarter campaign for a subsequent documentary: Rollaball.

The film's director, Eddie Edwards, says that his interest in the players is lost on some Ghanians.

"When I was filming, I would often get approached by the police, who would say, 'why are you interested in these guys? They're just thieves. Why do you give them so much attention?"

Through filming and getting to know the men, Edwards says he has learned to appreciate just how misunderstood the men are. 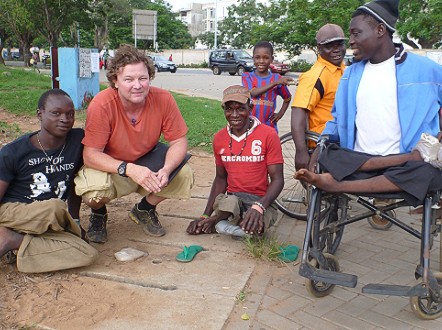 "A lot of these guys come from poor backgrounds, and either their families couldn't afford to put them through school, or else they were completely neglected and forced to live on the streets. But they have a great sense of humor, a great sense of camaraderie and a great sense of brotherhood," he says.

The price of fame

Edwards, who has spent years filming the men, says that their increased notoriety has been a bit of a "double-edged sword." For some of the men, he admits, the fame has gone to their heads.

"As the team's gotten more popular, one of the guys, No Fear, has started to behave like Wayne Rooney. He's started to really bling it up and changed his hairstyle," says Edwards.

I took upon myself something bigger than me.
Albert Frimpong, coach

Their fame, however, has done little to boost their income.

"Publicity is good, but it hasn't given us any reward in terms of finance," says Frimpong.

"Anyone who comes to film them gives us enough for transportation and to pay for their water, but by the time the game is over, the money is finished."

Unfortunately, not everyone realizes that fame doesn't necessarily equal cash.

"People in traffic sometimes recognize them from TV and think they're making money from their appearances and that they don't deserve to be helped," says Edwards.

Read: This is the world's toughest bike race

Read: Running 220km through a desert