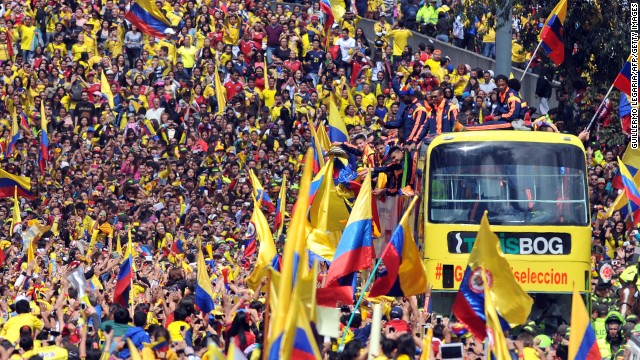 The Colombian team bus edges through massive crowds who greeted them in the capital Bogota. 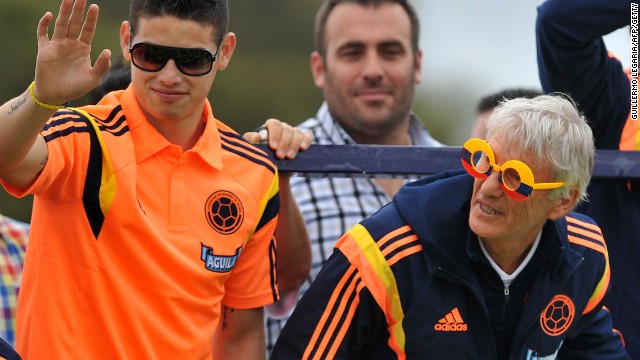 World Cup leading scorer James Rodriguez was the center of particular adulation from the Colombian fans in Bogota. 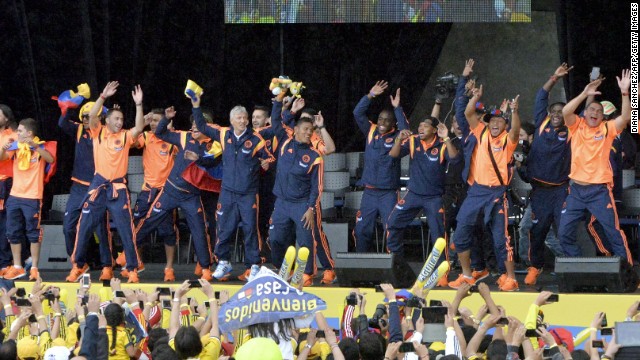 The Colombian squad shows off its dancing skills as it is paraded in front of its adoring fans. 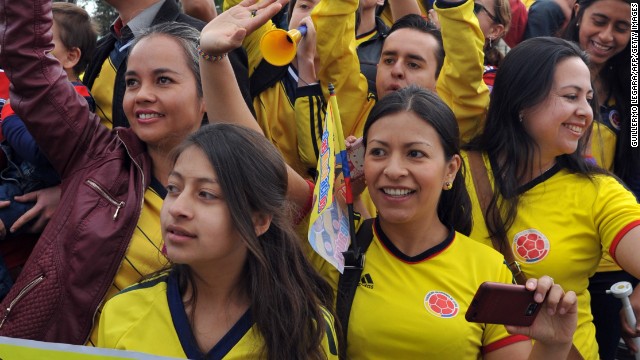 Thousands packed the streets of Bogota to welcome home the Colombian team after its exit from the World Cup in the quarterfinals. 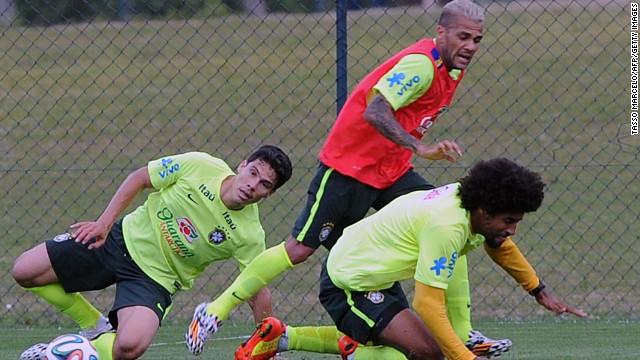 (CNN) -- Colombia may have exited the World Cup at the quarterfinal stage but it did not stop a massive crowd from welcoming home their heroes in the capital Bogota Sunday.

Hosts Brazil put paid to the team's hopes with a narrow 2-1 victory in Fortaleza Friday, although the win came at a heavy price with Neymar ruled out for the rest of the World Cup.

Arriving at El Dorado airport after an Avianca flight, the squad were met by a frenzied welcome with thousands lining the streets as their open top bus negotiated its way through the streets.

He scored his sixth and tournament-leading goal, a late penalty, in the defeat to Brazil.

"Thanks for always being there, thanks for the support, we love you," Rodriguez said as he addressed the crowd.

They had gathered early, most wearing the team's yellow shirt, to catch a glimpse of the players who were given red carpet treatment at the airport, before going on a tour in the bus, which inched its way through the throngs.

The Colombian players were then presented on a stage at the Simon Bolivar park and showed off their footwork by dancing to the music.

Meanwhile, the Brazil squad has been training in Teresopolis ahead of its semifinal clash with Germany in Belo Horizonte Tuesday.

Chelsea's Willian, who could come in for Neymar, admitted his loss was a blow to Brazil's hopes of winning the World Cup on home soil.

"Neymar sets the standard for us. He is capable of deciding any game, so playing without him will be difficult," he said.

But the midfielder added: "We know the quality that we have. We are all very sad at losing him but we are now even stronger after what happened and we can continue to pursue our dream."

Willian suffered an injury scare in training Saturday after a clash with Hernanes but said it would not prevent him playing in the last four clash.

Coach Luis Felipe Scolari's other possible replacement for Neymar, who has fractured a vertabra in his back, could be winger Bernard, who plays for Shakhtar Donetsk.