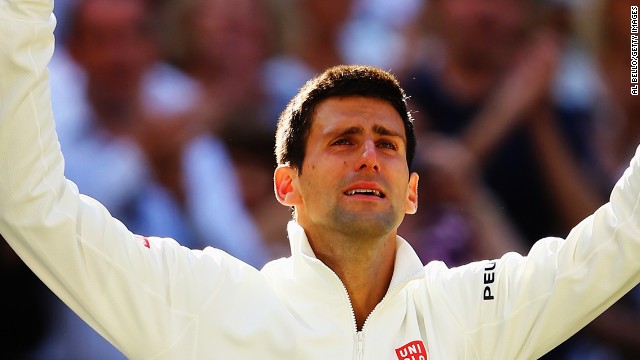 Tears of a champion. Novak Djokovic shows how much victory meant to him after a five-set classic against Roger Federer. 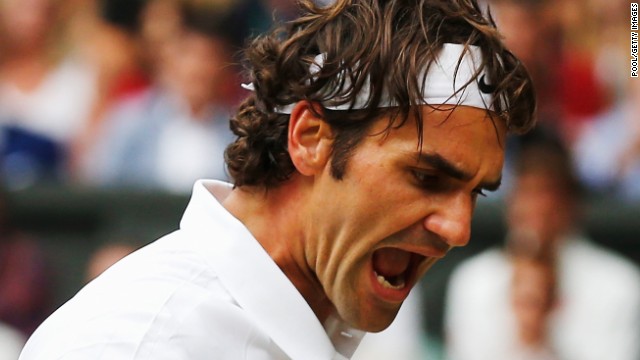 Seven-time champion Federer was often in inspired form as he took an early lead in the final. 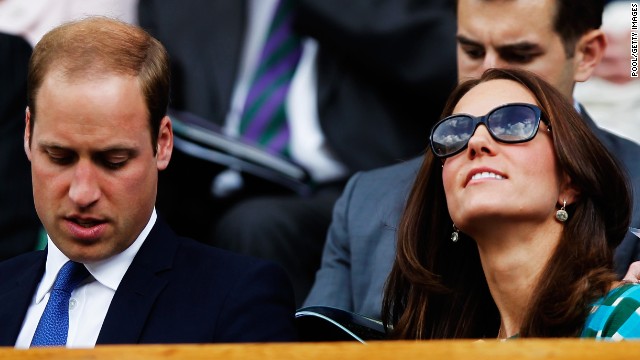 Prince William Duke of Cambridge and Catherine, Duchess of Cambridge watch the action from the Royal Box on Centre Court. 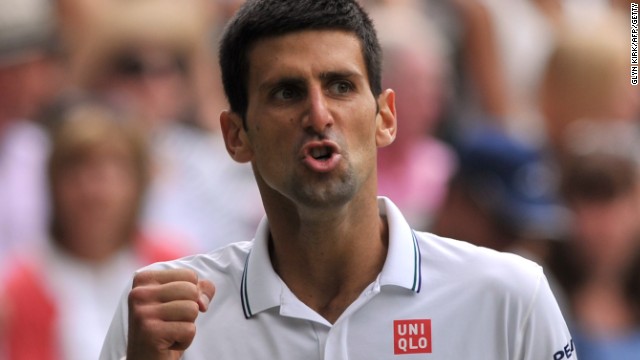 Djokovic had to dig deep after Federer saved a match point in the fourth set and forced a decider. 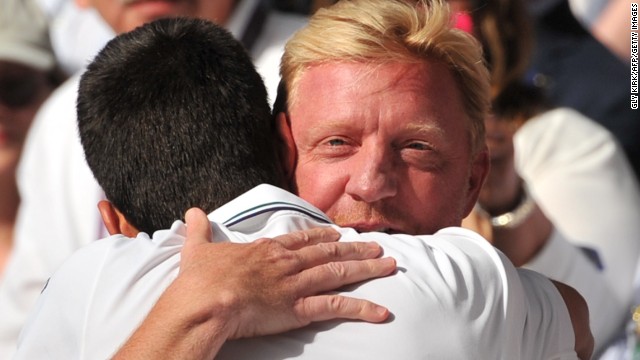 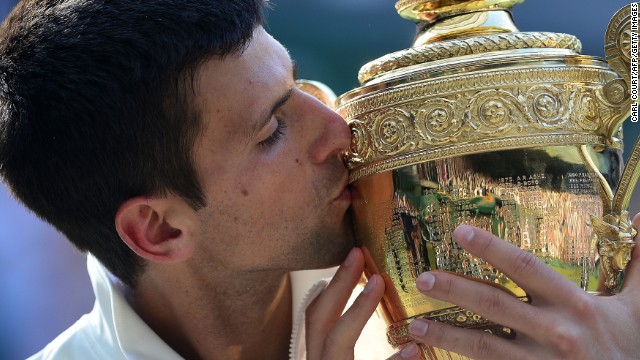 Wimbledon, England (CNN) -- Roger Federer and Eugenie Bouchard, one experienced and the other almost a rookie, started as clear crowd favorites in the men's and women's finals at Wimbledon this weekend.

They went 0-for-2 -- but in contrasting fashion.

After Bouchard was crushed by Petra Kvitova on Saturday, Federer was only just denied a record eighth title at the All England Club by Novak Djokovic in a classic Sunday that saw the duo combine for 143 winners and a smallish 56 unforced errors.

The higher-profile guests in tennis' grandest arena included David Beckham and the Duke and Duchess of Cambridge.

The partisans almost got their way too since Federer had the advantage in the fifth after he rallied from 5-2 down in the fourth, saving a match point with an ace originally called long.

He was thus on the verge of becoming the first man since 1948 to win a Wimbledon final after fending off a match point.

"I kept believing and trying to play offensive tennis," Federer, watched by his young twin daughters, told reporters. "I'm happy it paid off in some instances.

"As you can imagine, I'm very disappointed not being rewarded with victory."

Had Djokovic lost -- and don't forget he entered the record books for the wrong reason last year when he was on the other side of the net as Andy Murray ended a 77-year British drought -- it would have gone down as one of the biggest chokes in grand slam history.

Ultimately, Djokovic also prevented Federer -- a month away from his 33rd birthday -- from becoming the oldest men's Wimbledon champion in the Open Era and claiming a record-extending 18th major.

"I could have easily lost my concentration in the fifth and handed him the win, but I didn't and that's why the win has special importance to me," Djokovic told reporters.

What a match. Wowee. Watching it made me miss lunch and now i go practice hungry. Thanks guys

It might have been the Swiss' last realistic opportunity to capture a grand slam, though he has been brushed aside before only to rebound.

As for Djokovic, with the boost of confidence he's sure to receive by bagging a seventh grand slam crown, he'll be hard to stop at the US Open and beyond.

Perhaps he can replicate his 2011 form, when he won Wimbledon, the US Open and Australian Open.

"When Novak was No. 1 in 2011, there was no No. 2 or No. 3," Mats Wilander, one of those tied with Djokovic on seven majors, told CNN. "I think Djokovic has the game to not only be No. 1 in the world but remove the challengers that are behind him.

"He has a chance to do that again, especially as the next six, eight, nine months are on his favorite (hard-court) surface. I think he can just run away with things now for the next nine months until we get back to the clay-court season."

Djokovic badly needed this title, as he acknowledged, given he had lost his last five grand slam finals outside Australia. As a bonus, he replaces Nadal as the world No. 1.

The pressure on his coach, Boris Becker, will dip now, if only slightly.

Judging by his shoddy semifinal performance against Grigor Dimitrov, not many would have picked Djokovic to win a second Wimbledon title.

He led by a set then allowed the Bulgarian to find his way into the encounter. It turned into a four-set struggle. Slips on Friday rendered Djokovic frustrated and he took two bad falls Sunday, one necessitating a medical timeout in the fifth.

When Federer broke back early in the fourth set, Djokovic was dragged into another dogfight.

Instead of winning in five sets, Djokovic could have won in three in the pair's 35th meeting and first in a grand slam final since the 2007 US Open.

"I felt like all the sets were very close for me to take," said Djokovic.

Consistently in Federer's service games in the first, Djokovic nonetheless fell behind 3-0 in the tiebreak. He surged, holding a set point on his own serve, but was pegged back to 6-6 with a Federer forehand down the line.

Federer saved another set point with an ace, winning the last three points of the tiebreak.

All the energy -- mentally perhaps more than anything else -- took a toll on Federer and the first break of the match handed Djokovic a 2-1 lead in the second.

It was an advantage he would never relinquish and by the end of the third set, he hadn't been broken.

Prior to Djokovic's meltdown in the fourth, it seemed like the third-set tiebreak would prove pivotal. Federer's forehand went awry and with three misses, Djokovic took that tiebreak 7-4.

Federer's partnership with Stefan Edberg -- one of the best volleyers in tennis history and Becker's rival during their playing days -- has seen him charging forward more.

He enjoyed success at the net in the first set, winning 71% of net points, but the number dwindled to 60% in the second and 50% in the third. The figure rose in the fourth, diminishing in the fifth.

The stage was set for Djokovic in the fourth. Hitting with more zip from the baseline and with Federer losing sting on his serve, he broke for 3-1.

When Federer broke back for 2-3 it was temporary respite since Djokovic upped his game to move to the verge of the Championship at 5-2.

But he faltered trying to serve it out at 5-3, beginning with a forehand error with Federer stranded.

The drama was nothing compared to the 10th game. Down the match point, Federer struck a serve down the middle called long.

Federer -- a traditionalist not in favor of Hawk-Eye when it was introduced -- challenged and to his utter relief, was correct. He held for 5-5.

"It's really only until the fourth set when I was down a break that I started to understand more how to return him, which was a surprise for me because I've played him that many times," Federer said.

The Great Escape was on.

A toilet break ensued for Djokovic, aiding no doubt to clear his head. He saved the first break point of the fifth at 3-3 with a fine inside-out forehand but was trumped in the next game as Federer saved three -- one thanks to an outstanding low volley.

They ticked on until the 10th game, when Federer buckled. Serving second in the set and now not able to generate free points on his serve, Djokovic pounced.

Federer netted a backhand to Djokovic's joy on a second match point and Djokovic celebrated minutes later by eating the grass a la 2011. He dedicated the win to his late, first coach, Jelena Gencic.

"This has been the best quality grand slam final I've ever been part of," said Djokovic.

For Federer, it was his second loss in a Wimbledon final in nine tries.

"I'm very happy to see that with feeling normal I can produce a performance like I did the last two weeks," said Federer, troubled by a bad back in 2013. "That clearly makes me believe that this was just a steppingstone to many more great things in the future."

To that end, the fans hope to see him in a 10th final next year -- and emerge as the winner.