Send U.S. marshals to the border 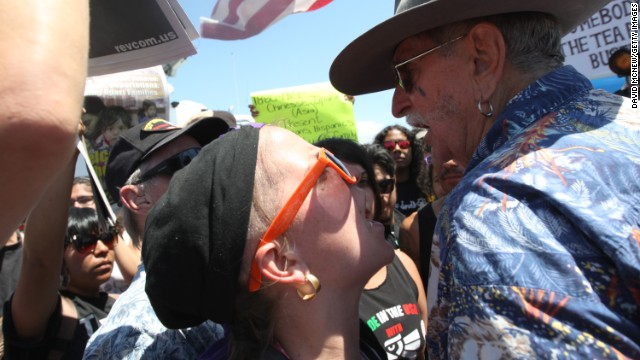 A protester against buses carrying immigrants, right, faces off with a pro-immigration protester in Murrieta, Calfornia, on July 4.
STORY HIGHLIGHTS

(CNN) -- President Obama needs to send U.S. marshals to Southern California. They can protect the Central American women and children whom the federal government has sent out West, with more due to arrive every 72 hours under an immigrant redistribution plan hatched by the Obama administration.

The next group of immigrants is expected to arrive on July 7.

The marshals could ensure that nobody interferes with this federal law enforcement operation, as was done last week by angry protesters in Murrieta, California, a small town in southwest Riverside County, about 70 miles north of San Diego. It was there that the Border Patrol had planned to process about 140 women and children who had, just a few hours earlier, arrived on a plane from South Texas.

More than 52,000 unaccompanied minors have been caught trying to cross the U.S.-Mexico border since October.

I've written about immigration for 25 years and, from my many visits to the U.S.-Mexico border, and the tours I've taken with Border Patrol agents in Arizona, Texas and California, I know this much: The war against immigrant smugglers is a battle of wits and a contest of wills.

In managing the border children crisis, the Border Patrol recently showed wits. Now, by sending in the marshals, Obama can demonstrate the will.

Last week, on the Fourth of July, Border Patrol agents avoided some unpleasant fireworks by outsmarting dozens of those who are against the buses and those who aren't. Both crowds had descended on Murrieta anticipating a repeat of what had happened three days earlier, when the group protesting the arrivals blocked and turned around three Department of Homeland Security buses carrying the women and children.

In both protests, Murrieta police officers were on the scene. But during the first one, they were worthless. They should have arrested those protesters who blocked Border Patrol buses and forced them to retreat. They were better during the sequel, and, in fact, arrested a handful of people. While the dueling crowds were facing off in Murrieta, the Border Patrol took a detour from the airport and transported the immigrants to another processing center in San Ysidro, about 15 miles south of San Diego.

There will likely be more protests in California over the next few weeks. If things get out of hand, someone could get hurt. That's why we need U.S. marshals, to prevent that from happening.

I shouldn't have to make federal case out of this, because it already is one. It's a federal policy that lets these children stay in the United States with relatives. They're in the custody of a federal agency, in a federal law enforcement vehicle, driven by federal law enforcement officers. It's the federal government's job to protect its personnel and the people being transported and to ensure that this operation is not sidetracked by mob rule, even if that means arresting those who get in the way.

The images coming out of Murrieta reminded me of another group of protesters intent on defying an order from the federal government: white Southerners in the 1960s. They also terrorized children, African-Americans who sought to attend desegregated public schools, much as the children on the bus were terrorized by the angry mob.

Protester: U.S. 'not a borderless nation'

Border battle on the 4th of July

What's next in the immigration crisis?

It's not a perfect comparison; the children on the bus were undocumented immigrants, many of whom might qualify for refugee status if they can show "credible fear" of returning to their home countries. The African-American children were U.S. citizens.

Still, I wasn't the only person in America thinking that we had seen this movie before.

"This green-eyed and blond-with-gray woman who is 74 years old cannot believe that 'my fellow citizens' haven't learned anything over the last 50-plus years," wrote one reader. "I remember college friends who went to Alabama and Mississippi to help register voters, teach people to read, march for civil rights for ALL of us, no matter what color or race or socioeconomic status.

"The screaming and hateful people in (Murrieta) reminded me of the people who screamed at little black kids walking to schools (accompanied by law enforcement), who treated James Meredith and Autherine Lucy and so many young people horribly. It is so sad that after all these years, so many people haven't gotten a clue about decency and kindness."

By trying to thwart the intent of the federal government, the Murrieta mob seems to want to relive the '60s.