(CNN) -- When Matthew Kabonero and Daniel Ndahiro first met at a high school just outside of Kampala, they immediately became firm friends.

Years later, their friendship would serve as the foundation for starting one of Uganda's first digital advertising companies -- Camouflage Media.

The firm provides digital screens for corporate clients which can be seen in Kampala's supermarkets, shops and corporate lobbies. It also offers social media services by managing companies' online presence and growing their fan base.

"Advertising in general was an area of interest" says Matthew Kabonero. "The idea to make it digital was because of the missed opportunity we saw in areas where static adverts were not effective enough to gather interest, for example at waiting areas of an office reception.

"We envision starting a digital revolution in Uganda and, who knows, perhaps in other parts of Africa as well.
Matthew Kabonero

"You can only look at a poster for so long," he says.

Kabonero and Ndahiro both studied business administration, but were quick to jump on the opportunity they saw in making advertising go digital in Uganda. They gathered funds from family and launched their venture.

"With print, you have to print newspapers every day, but with digital advertising it's just a matter of changing the content that you have and distributing it online, so the expense of having to go through the printing is minimized," says Kabonero.

The company now employs seven people and is breaking even, but they hope to start making a profit in the next six months. They have already gained patronage from one of the country's most profitable banks, Standard Chartered, as well as MTN, a large telecom company.

The young entrepreneurs admit it wasn't all plain sailing though -- early challenges included difficulties in coordinating teams which were deployed across Uganda, and meeting deadlines. But Kabonero and Ndahiro insist that solving problems helped them learn, and grow a stronger business. 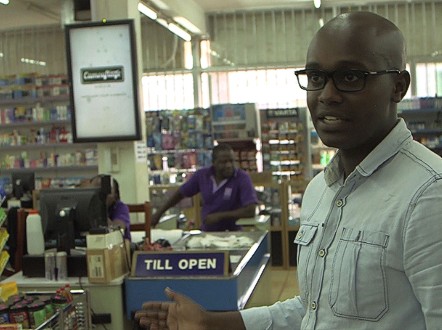 Daniel Ndahiro, one of the founders of Camouflage Media, showcasing the company's digital screen at a Kampala supermarket.
CNN

"What sets us apart from our competitors in the market is that we also create content for them. So we've gone a step further" says Ndahiro.

When it comes opportunities for entrepreneurs in Uganda, both think are great: "Many markets out there are saturated," says Kabonero, "however when you come to Uganda you'll find that many businesses that exist in other areas don't exist in Uganda, so that's an opportunity that exists."

The team want to expand their business to the country's classrooms by providing interactive digital solutions for teachers, and they also want to take their screens outdoors: "We envision starting a digital revolution in Uganda and, who knows, perhaps in other parts of Africa as well. It would be a dream come true." concludes Kabonero.

Read more: He started in his teens with just $14. Now he's a 21-year-old paper bag king