World Cup: Will Messi or Robben win battle of wizards? 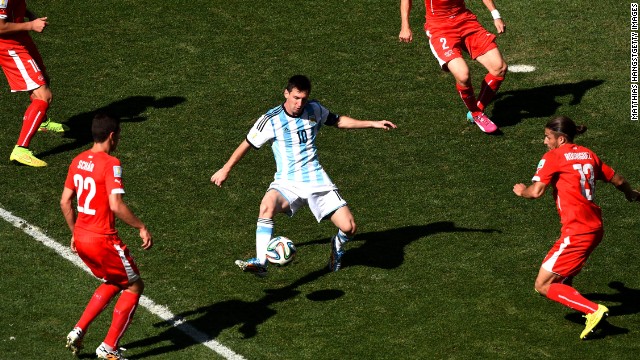 Messi was a marked man during Argentina's last 16 match against Switzerland and will receive similar attention from the Dutch in Wednesday's semifinal. 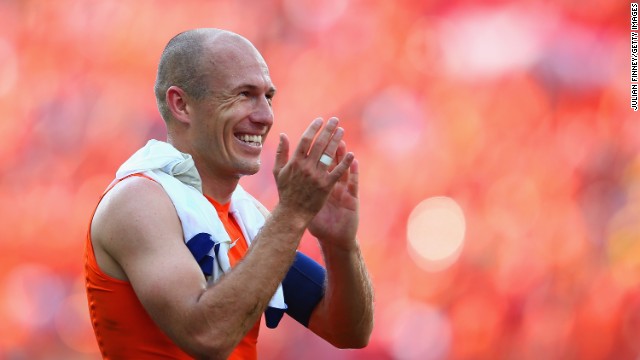 The Netherlands will need another stellar performance from winger Arjen Robben if they are to appear in back-to-back World Cup finals. 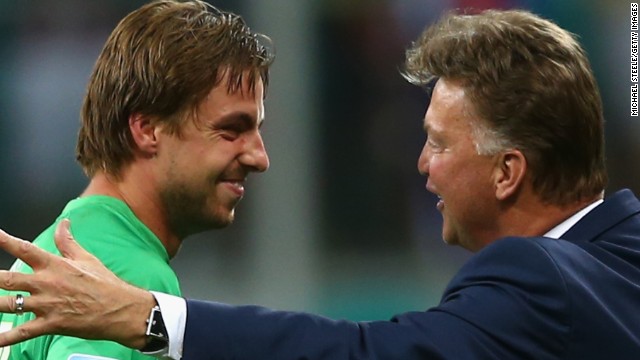 Dutch goalkeeper Tim Krul (left) is congratulated by his coach Louis van Gaal following his success in the penalty shootout against Costa Rica in the quarterfinals. Van Gaal sent on the Newcastle United keeper in the last minute of extra time. 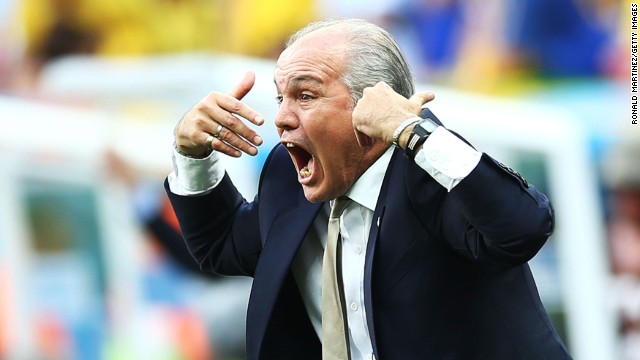 (CNN) -- All eyes will be on Lionel Messi and Arjen Robben when Argentina face the Netherlands in the World Cup semifinal in Sao Paulo to discover who will meet Germany in the final.

The Dutch will be looking to their mercurial winger to steer them to a second successive World Cup final while Argentina will likely need some Messi magic if they are to reach a first final in 24 years.

Both men have been central to the success of their sides so far in the competition earning glowing tributes from team managers past and present.

Argentina coach Alejandro Sabella said his midfield maestro was like "water in the desert" following his side's 1-0 victory over Belgium in the quarterfinals.

"Each time he gets the ball, it represents hope for all of us and a threatening situation for our opponents," Sabella told reporters after the game.

"Regardless of whether he scores goals or not, his influence is decisive. A game has many aspects, apart from goals.

"When you have a player such as Messi, who never, or almost never, loses the ball, it's water in the desert and not just when he scores."

Dutch praise for Robben has been equally fulsome.

Former Dutch coach Bert van Marwijk, who steered the Oranje to the final in 2010, believes Robben may be a better player than the Barcelona midfielder.

"Argentina have got Messi, we've got Robben. And quite frankly, I think the better player is Arjen," van Marwijk told Dutch broadcaster NOS TV.

"Four years ago, Arjen was injured just before the start of the tournament in a friendly against Hungary. He was carrying the injury for the whole tournament and was never really 100%. But this year he's been unstoppable."

"I wouldn't swap Robben for any player in the world," Kuyt told FIFA.com earlier in the tournament.

"He is having an amazing World Cup. He's scored goals and created goals, he's so fast and he is a very important player for us."

Three goals and one assist at the finals attest to Robben's value, though he's also attracted plenty of criticism for his theatrical habit of going down in the penalty area during the tournament.

Coach Louis van Gaal will need the 30-year-old to put in a flawless performance if the Dutch are to progress.

As Sabella has hinted, two-time champions Argentina are perhaps even more reliant on Messi.

The 27-year-old has scored half of Argentina's eight goals in the competition so far.

With Angel di Maria ruled out with a thigh injury, strikers Gonzalo Higuain and Sergio Aguero (if passed fit) will be relying on Messi more than ever to set them free in front of goal.

With three Ballon d'Or awards, three Champions League winners medals and six La Liga titles to his name, Messi would seal his place in football's pantheon if he became the first Argentine since Diego Maradona to lift the trophy.

But he's not getting carried away just yet.

"To play a World Cup final with the great atmosphere of the Maracana is something what every player dreams of, but first we have to make sure we get there," Messi said, FIFA.com reported.

Previous matches between the two sides have produced moments of individual brilliance -- Dennis Bergkamp's exquisite 90th-minute winner in the quarterfinal in 1998 was one of the greatest goals ever seen at a World Cup finals.

Twenty-four years earlier it was Johan Cruyff who was strutting his stuff, scoring two goals for the Dutch in a 4-0 win at the 1974 finals hosted and won by Germany.

Argentina's only victory against the Netherlands at a World Cup came in the 1978 final -- legendary striker Mario Kempes scoring twice in a 3-1 extra time win at the Estadio Monumental in Buenos Aires.

Arjen Robben has scored three goals in the tournament so far.

The teams have met three times in the knockout stages of the World Cup -- Netherlands lead 2-1.

For all the attacking flair on the pitch, the result, in the end, may hinge on the tactical nous of the men in suits standing on the touchline.

Since taking over in 2011, Sabella has overseen just four losses in 39 matches.

Van Gaal, meanwhile, has seen his side lose just twice in 26 matches during his second stint as the national coach.

The 62-year-old, who will take over as manager at English Premier League side Manchester United after the World Cup finishes, has won plaudits for some cunning substitutions during the finals.

The introduction of Klaas-Jan Huntelaar late in the game against Mexico helped turn the tide in the European side's favor.

The Schalke striker, who came on for Robin van Persie in the 76th minute, laid off the ball for Wesley Sneijder's sumptuous 88th-minute strike before scoring a penalty in injury time as the Oranje snatched a 2-1 victory.

Against Costa Rica in the quarterfinals, Van Gaal sent on goalkeeper Tim Krul in the dying seconds of extra time.

The bold move worked as the Newcastle United keeper pulled off two saves in the shootout to send the Dutch into the semis and a step closer to a first World Cup title.

"Maybe Louis does have a golden willy," Robben cheekily said following the last-gasp win over Mexico in the last 16.

On Wednesday we may be one step closer to finding out.