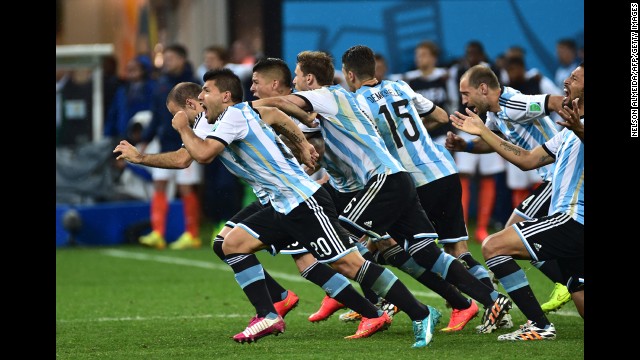 Argentina players run to celebrate their victory after a penalty shoot-out following extra time during their World Cup semifinal match against the Netherlands on Wednesday, July 9, in Sao Paulo, Brazil. Argentina defeated the Netherlands 4-2 on penalties and will go on to face Germany in the final. 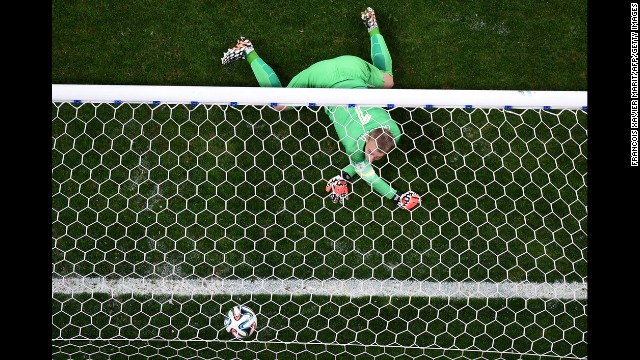 Dutch goalkeeper Jasper Cillessen fails to stop a ball during the penalty shoot-out. 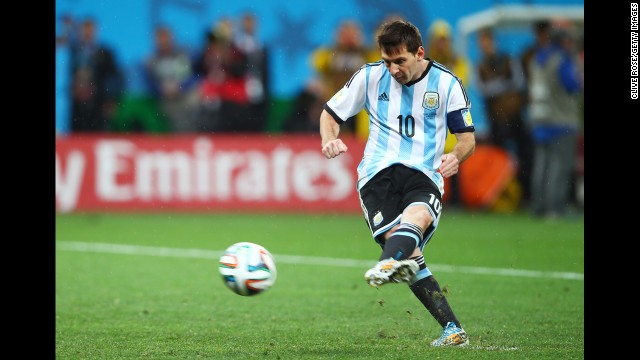 Argentina captain Lionel Messi shoots and scores a goal in a penalty shootout. 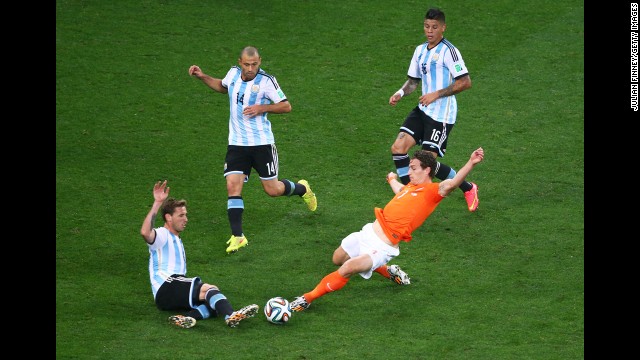 Daryl Janmaat of the Netherlands challenges Lucas Biglia of Argentina. 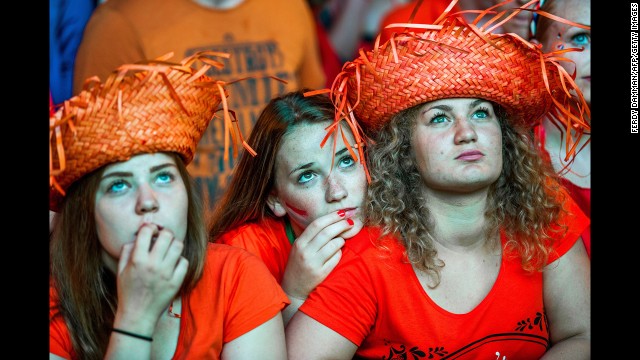 The market square in Groningen, Netherlands, is filled with supporters of the Dutch national football team. Despite the rain, 4,500 people gathered to watch the World Cup semifinal match between the Netherlands and Argentina. 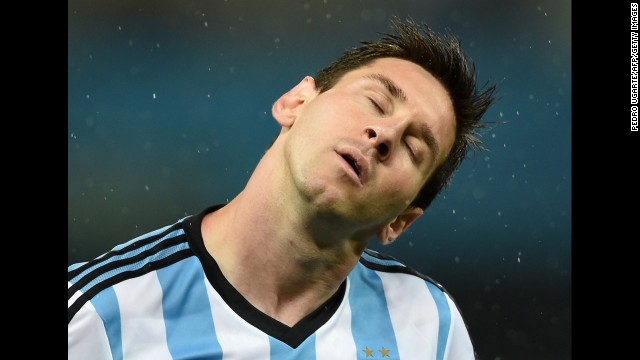 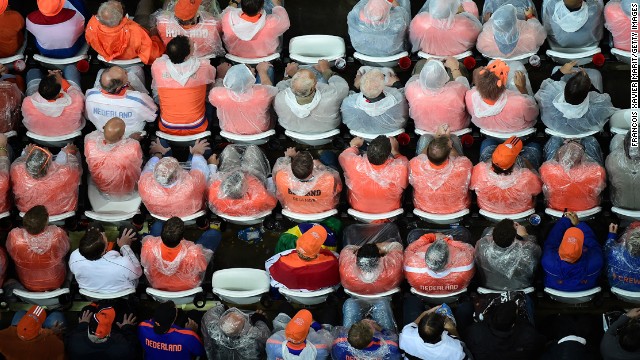 A general view of the stands. 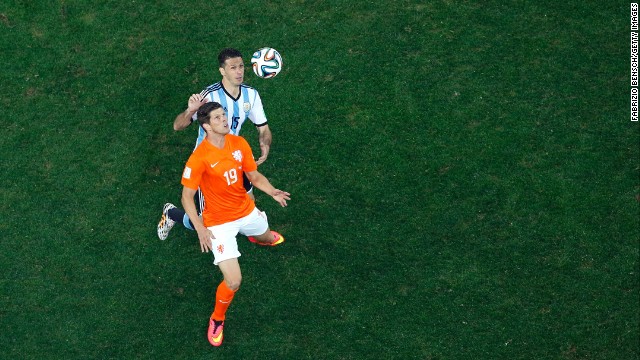 Klaas-Jan Huntelaar of the Netherlands controls the ball against Martin Demichelis of Argentina. 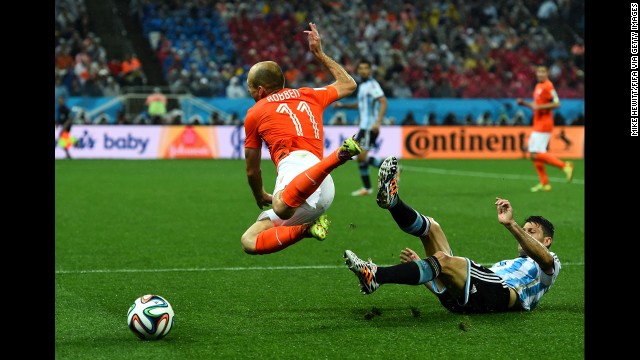 Arjen Robben of the Netherlands is tackled by Martin Demichelis of Argentina. 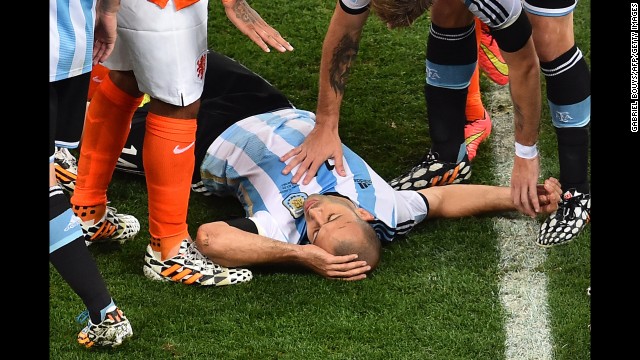 Argentina midfielder Javier Mascherano receives medical assistance. His head collided with an opponent's in the first half, but he kept playing. 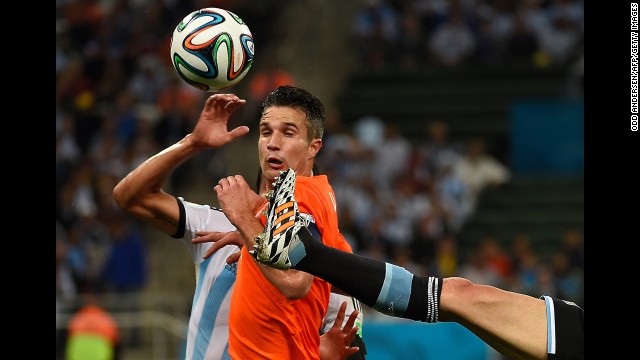 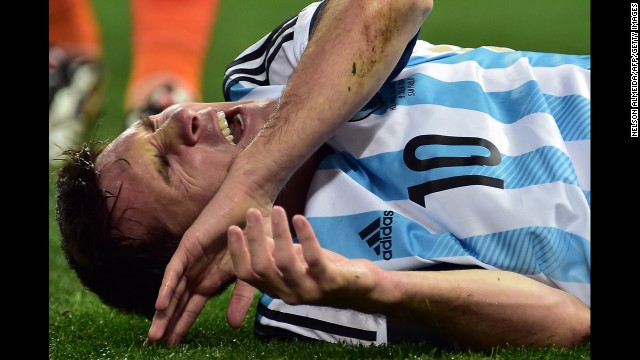 Messi reacts after a challenge. 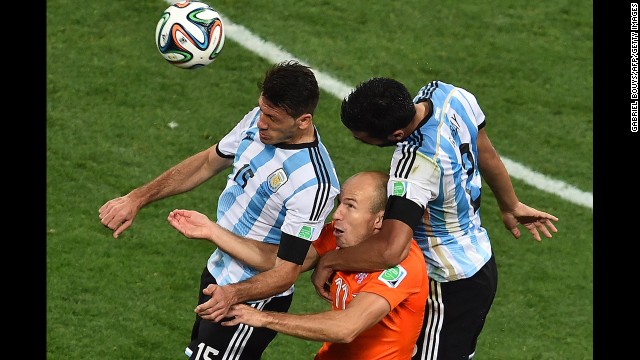 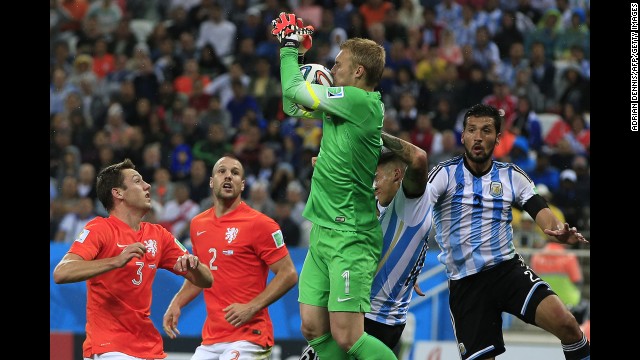 Cillessen makes a save. 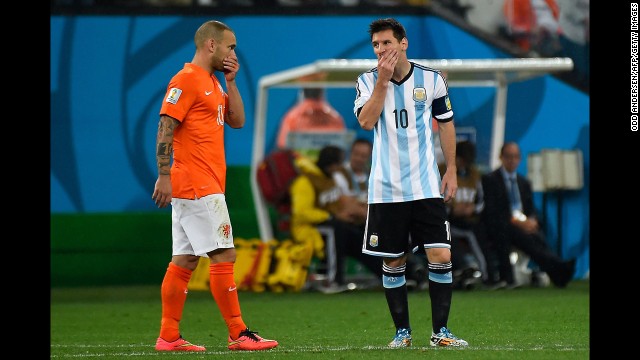 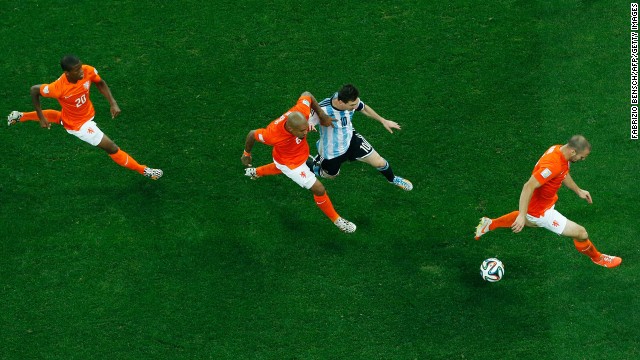 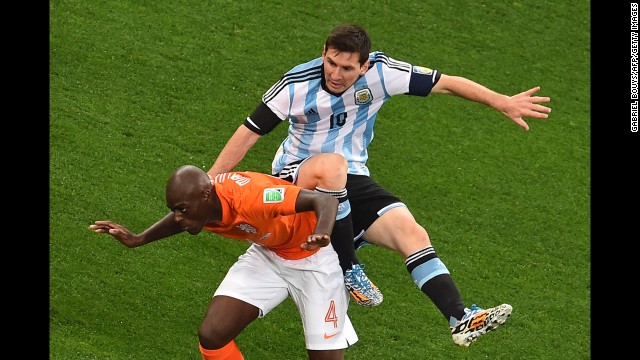 Dutch defender Bruno Martins Indi, left, collides with Messi in the first half. 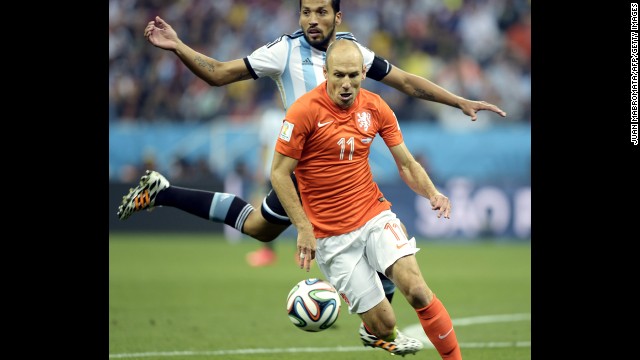 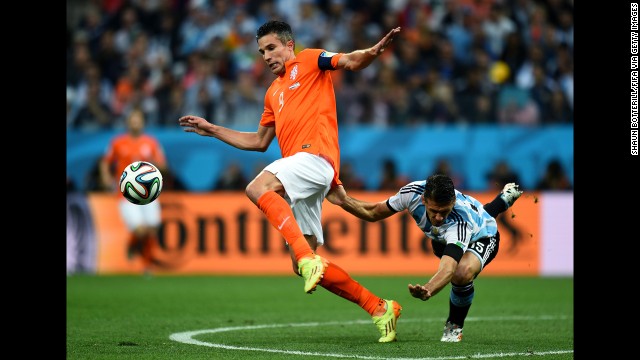 Van Persie controls the ball as Demichelis falls behind him. 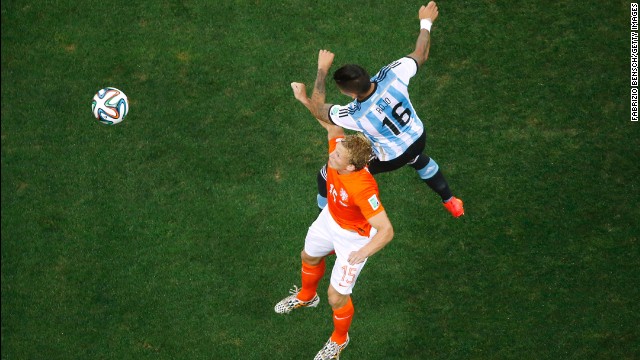 Dirk Kuyt of the Netherlands and Marcos Rojo of Argentina go up for a header. 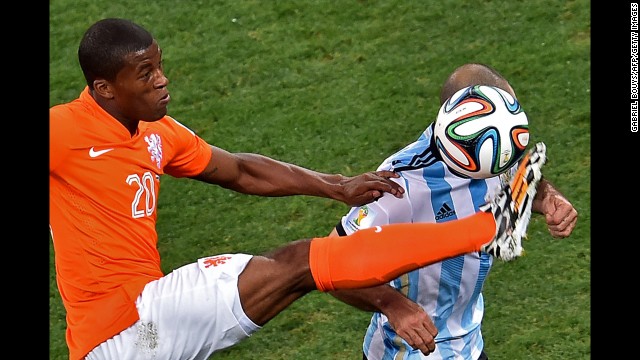 Georginio Wijnaldum of the Netherlands kicks the ball near Mascherano. 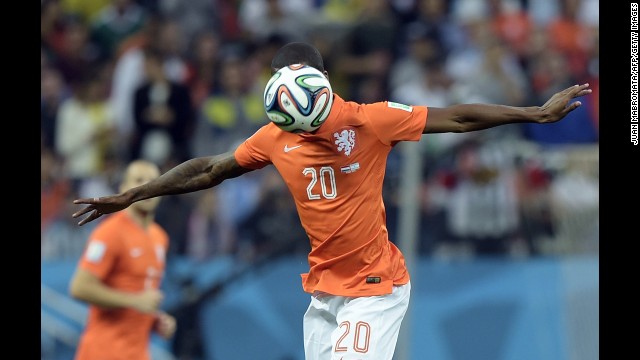 Wijnaldum controls the ball in the first half. 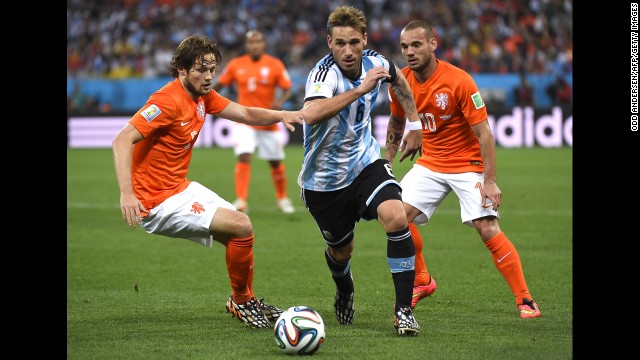 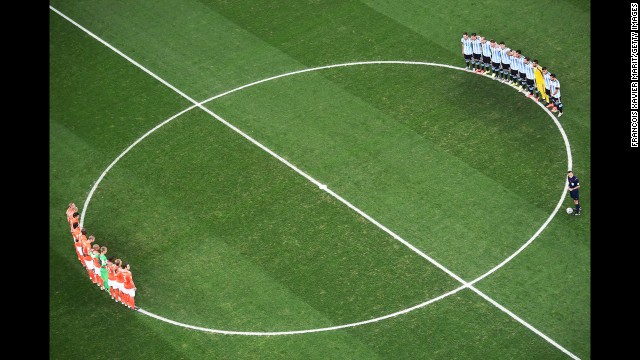 Before the match, the two teams observe a moment of silence for Alfredo Di Stefano, the soccer legend who passed away this week at the age of 88. 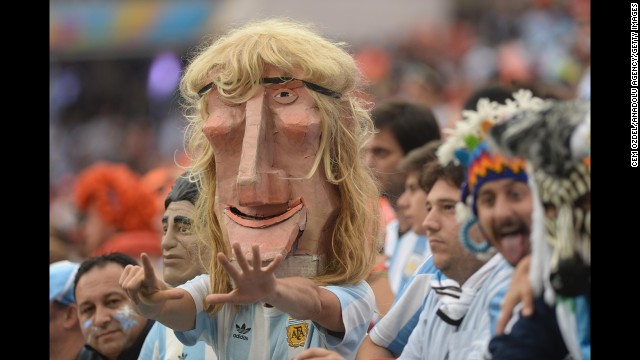 An Argentina fan in the stadium wears a mask of former player Claudio Caniggia. 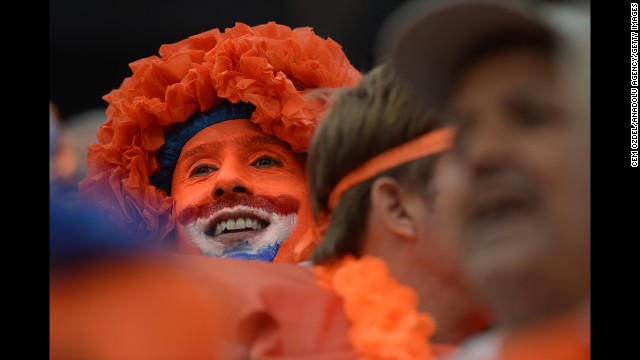 (CNN) -- Brazil thought its nightmare was over -- but perhaps it's only just beginning.

After the humiliation of being obliterated by Germany, those who had dreamed of a Brazilian World Cup triumph might have thought they would be left alone to quietly lick their words or perhaps console themselves with a sombre walk along the shores of the Copacabana.

Alas, such a luxury will not be afforded to them -- not now at least.

Instead neighbors Argentina will launch an invasion of Rio Sunday hoping to start their own party in its arch rival's back yard.

This was the result which Brazil feared -- the scenario it never wanted to face, to have Argentina, its oldest foe, walk out at the Maracana on Sunday just 90 minutes away becoming world champions.

While Brazil had leaked goals in its shambolic defeat by Germany, Argentina displayed true grit and then calm under pressure in a penalty shootout to book its place in the World Cup final for the first time in 24 years -- the fifth in its history.

Don't bother telling those with their faces painted blue and white that was a tepid and insipid encounter.

They're probably still jumping up and down with joy -- while celebrating Argentinian Independence Day like never before.

"I'm very happy because we reached the final and now we will see what we can do," Argentina coach Alejandro Sabella told reporters.

"We will give everything as usual, with humility, work and 100% effort."

A goalless 120 minutes was enough to bore most to tears but when Maxi Rodriguez struck the decisive penalty kick to win the shootout 4-2, the march to Rio began and Brazil closed its eyes.

For the third time, Argentina will play Germany in the final having won in 1986 and lost in 1990 -- but regardless of the opposition, it will surely need to improve on this performance.

Lionel Messi, the man who has inspired Argentina on so many occasions, was almost anonymous but he was not the only one to disappear.

This game was a case of going from the sublime to the ridiculous as the sequel to Germany's dominant display over Brazil was temporarily forgotten as these two sides served up one of the poorest offerings of the tournament.

It was dire -- so dire you had to keep pinching yourself that this was actually a World Cup semifinal.

For all the talent on the field, the inability to keep possession, deliver a cross or even manage a simple pass proved beyond those on show.

Often such games are classed as 'intriguing', 'tactical' or 'chess like' but none of those descriptions fitted -- file this under dreadful and error-strewn.

Neither side deserved to win and penalties looked the most likely outcome from the offset -- a stark contrast to Germany's 7-1 thrashing of Brazil on Tuesday.

While the goals flowed like Caipirinhas in the bars of Belo Horizonte, Sao Paulo provided a far more sober affair.

Tight, tense and turgid in the first half, both sides struggled to create a chance of note with space at a premium.

Messi, so often Argentina's leading light, fizzed a free kick at goal which Jasper Cillessen did well to save, while Ezequiel Garay's header flew just over the crossbar as the South American side briefly threatened.

Messi, making his 92nd international appearance, found himself accompanied by Nigel de Jong each and every time he moved, touched the ball or dared to breathe.

Previously ruled out of the tournament with a groin injury only to make a miraculous recovery in time for the contest, De Jong gave the Dutch the bite in midfield which it had missed in the quarterfinal victory over Costa Rica.

But while the Dutch side was relatively untroubled in defense, it rarely threatened going forward with Arjen Robben and Robin van Persie almost anonymous.

Robben, one of the outstanding players of the tournament, touched the ball just six times in the opening 45 minutes as Argentina, and Javier Mascherano in particular, kept the flying Dutchman quiet.

If anybody had hoped that the fare might improve after the interval they were left sorely disappointed.

Passes went astray, possession was squandered with both teams failing to provide any trace of quality in the final third.

And yet with the contest at 90 minutes, the Dutch had the opportunity to win the tie in the most dramatic fashion as they attempted to reach a second successive final.

Wesley Sneijder, anonymous for much of the evening, produced a fine flick to release Robben but the Bayern Munich man dallied and allowed Mascherano time to recover and block his effort.

A very quiet wave for Netherlands v Argentina with a peak for each team. http://t.co/RT7moEyRrG #NED #ARG pic.twitter.com/OEPLfo4qxx

With neither side able to muster a goal, the tie moved into extra time with the Dutch appearing the more threatening.

Robben's low effort forced Sergio Romero into a routine save in an otherwise unremarkable opening 15 minutes of extra time.

Argentina, impotent for much of the contest with Messi superbly marshalled by the Dutch defense, rarely looked capable of finding a winner.

But with five minutes of the tie remaining, it created its best chance of the contest when Maxi Rodriguez played in Rodrigo Palacio, but his header was easily dealt with by Cillessen.

Penalties ensued somewhat inevitably and it was Argentina which held its nerve with goalkeeper Romero the hero.

The Dutch, which had defeated Costa Rica on penalties in the previous round following the introduction of substitute goalkeeper Tim Krul, floundered under the pressure.

Ron Vlaar, one of the game's outstanding performers, was thwarted by Romero, who also saved from Sneijder.

In the end it was left to Rodriguez to fire Argentina into the final and get the party started -- a party which Brazil isn't invited to and one it hoped it would never have to see.

Read: Brazil dumped out by Germany