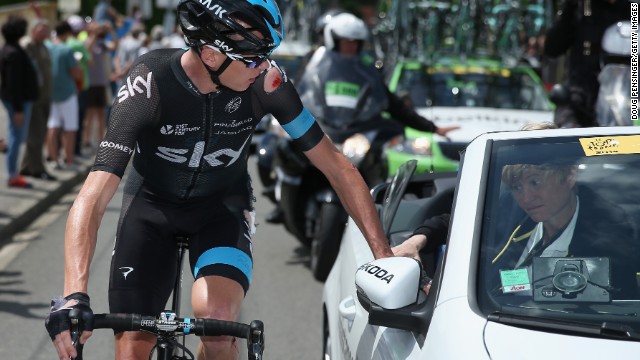 Chris Froome had begun the day struggling with a wrist injury and bowed out after two further crashes on stage five.
STORY HIGHLIGHTS

(CNN) -- Chris Froome had claimed it was a tougher ask to defend his Tour de France title than win it for a first time and so it proved, the Briton retiring after a third crash in the space of two days.

Evens favourite to defend his Tour title at Saturday's race start, Froome had crashed just four kilometers into Tuesday's stage damaging his left wrist and ripping skin off his left hip and buttock.

Tour doctor Florence Pommerie declared him fit to race on, an X-ray showing no broken bones.

But in torridly wet conditions during Wednesday's fifth stage, Froome crashed twice more after 29 and 85 kilometers, this time taking skin off the right-hand side of the body and forcing him to limp into his Team Sky car holding his wrist -- and out of the race.

Froome's teammate Geraint Thomas had warned of the treacherous conditions that lay ahead on the stage, much of which was on cobblestones, saying: "Nobody is looking forward to it.

"It's like riding on ice, especially with some of the corners as well. It'll be the last man standing. It's going to be a nightmare."

Nightmare it was for Team Sky as Froome crashed three kilometers before even the first of nine cobbled sections on the stage, which makes up much of the Paris-Roubaix classic, better known as "the Hell of the North", his team announcing his official retirement via Twitter.

Heartbreak for Chris Froome after another hard crash. He's climbing into the car and likely out of this year's. More to follow... #TDF

Two sections of the cobblestones -- or pave -- were scrapped by race organizers because of the treacherous conditions, which Sky team boss Sir Dave Brailsford described as "the wisest decision."

Cyclist's missed kiss most awkward ever?

Froome's withdrawal is potentially awkward for Brailsford given he omitted 2012 Tour winner Sir Bradley Wiggins from Team Sky because of the potential negative dynamic within the team due to his previously fractious relationship with Froome.

In good form and a former Tour winner, Wiggins would have been an obvious Plan B but that task may now rest on the shoulders of Australian Richie Porte, Froome's close friend and near neighbor in Monaco.

Froome's abandonment is a major blow for race organizers of an event billed by many as a head-to-head between Froome and Spain's Alberto Contador.