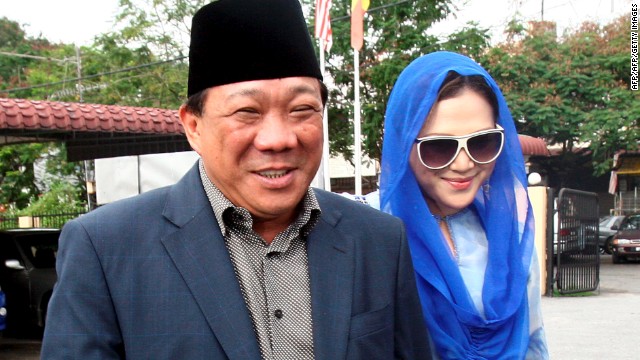 This photo taken on May 19, 2010 shows Malaysian lawmaker Bung Mokhtar Radin, at left, and his wife Zizie Ezette.
STORY HIGHLIGHTS

(CNN) -- A Malaysian politician who drew gasps by evoking Hitler in a congratulatory tweet to the German World Cup team has apologized, in his own inimitable style.

A member of the United Malays National Organization, Bung Moktar Radin posted his initial tweet on Tuesday after Germany knocked Brazil out of the World Cup with an impressive 7-1 win.

Predictably, a flurry of tweets followed, with many questioning Bung's sanity and how he came to be in politics.

To his credit, the MP responded, but perhaps not in a way some might have wished.

To @shaike49's contention that he was a "low class crazy MP," the politician wrote: "u can get lost... and enjoy with the loser."

To @layzebone's direct statement: "You're an idiot... educate yourself," the MP said: "say its to ur self."

By Thursday, Bung's online antics had caught the attention of the Malaysian Prime Minister Najib Razak who tweeted to his two million followers: "The comments made by Datuk Bung Moktar are unacceptable and wrong, and he will withdraw them."

He added: (Bung) "does not speak for Malaysia, or for ordinary Malaysians, who understand Europe's tragic past, and respect its modern unity."

He does not speak for Malaysia, or for ordinary Malaysians, who understand Europe's tragic past, and respect its modern unity.

"This should be a time of celebration for Germany, and we wish them all the best in the final."

Within one hour of posting his apology, he responded to a user who said: "Try saying this in europe, and see how fast u get gun down," with "im worried they might gun down u first."

"Hitler is part of history and the German team fought like how he did."

After initially condemning the comments as "an unacceptable allusion to the fascist regime of Adolf Hitler," the German Ambassador to Malaysia has now put the episode behind him.

It remains illegal in Germany to glorify Hitler or the Nazi Party, or to display symbols of the regime including flags, uniforms and slogans.

Earlier on Thursday, the Malaysian Chinese Association also demanded an apology from the MP.

In a statement on its website, the group's religious harmony bureau chairman Datuk Ti Lian Ker said he was "ashamed and appalled" by the tweet.

"From insulting women to disabled people, Kinabatangan MP Datuk Bung Mokhtar is no stranger to controversy, but now his zero common sense in attributing Germany's win to Hitler will make Malaysia the centre of a negative attention once again."