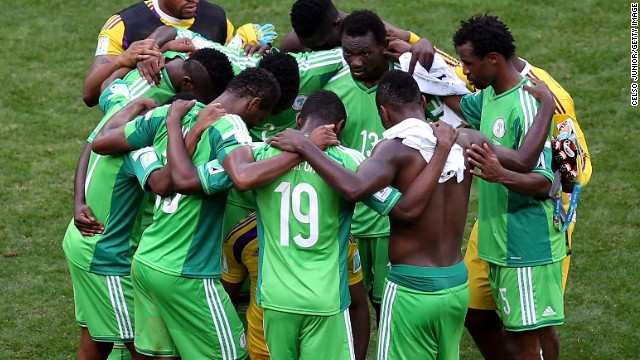 Nigeria's players form a huddle after a 2-0 defeat to France sent the African champions packing from Brazil 2014.
STORY HIGHLIGHTS

Editor's note: How are you celebrating the World Cup? Join the global conversation on CNN's Facebook Pulse

(CNN) -- FIFA has suspended Nigeria from international football citing government interference in the running of its national federation.

The emergency committee of the world governing body said the blanket ban would come into to place with "immediate effect" which means no Nigerian team, including club sides, can play in regional, continental or international competitions.

In the wake of Nigeria's exit to France at the last 16 of the World Cup, the high court of the West African country ruled that its federation would cease to run the national team, handing over the role to a government civil servant.

This is in breach of a FIFA rules that obliges member associations to manage their own affairs "independently and with no influence from third parties," it said in a statement.

Stephen Keshi, the coach of the African champions, resigned the day after the 2-0 defeat, after leading the Super Eagles out of the group stages of the World Cup for the first time since 1998.

FIFA warned the Nigerian authorities it would take action, but at the weekend an extraordinary general meeting of the federation took place in Abuja without former NFF (Nigerian Football Federation) chief Aminu Maigari and his congress having been restored to their positions.

Maigari was also arrested on his return from South America, but was later released.

"The suspension will be lifted once the court actions have been withdrawn and the properly elected NFF Executive Committee, the NFF general assembly and the NFF administration are able to work without any interference in their affairs," FIFA added.

The first team to suffer from the ban will be the Nigerian team which is due to take part in FIFA under-20 Women's World Cup next month.

Nigeria's men's national team is also scheduled to begins its defense of the African Cup of Nations title when qualifying matches start in September.

In addition to the exclusion from competitions, the NFF will also fall outside of any training or development programs run by FIFA.

It is not the first time it has fallen foul of the strict FIFA rules on government interference.

Nigeria was temporarily banned from the 2010 World Cup in South Africa after interventions by the country's president Goodluck Jonathan.

Fellow African World Cup qualifier Cameroon was also hit by a temporary suspension in July 2013 for falling foul of the same rule.