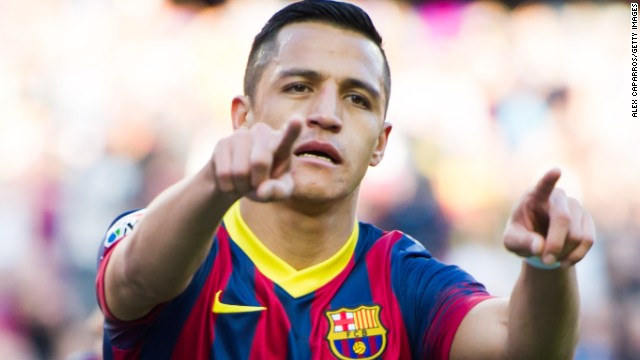 Arsenal manager Arsene Wenger didn't sign a forward or striker in this year's January transfer window when his team was very much still in the Premier League title race, instead relying on unproven 21-year-old Yaya Sanogo to back up French international Olivier Giroud.

The move backfired, with Arsenal -- as in years past -- slipping away in February and March.

Wenger and Arsenal, though, ventured into the market Thursday and landed Alexis Sanchez from Barcelona.

The 25-year-old agreed to join the Gunners from Barcelona on a "long-term contract" for an "undisclosed fee," Arsenal said on its website. That fee is about $51 million, according to reports.

Sanchez impressed for Chile at the World Cup in Brazil with his finishing -- scoring twice -- and work rate. He netted 47 goals in 141 games for Barcelona, the Catalan club said, and he won a league title and the Spanish Cup in his three years in Spain.

"I'm so happy to be joining Arsenal, a club which has a great manager, a fantastic squad of players, huge support around the world and a great stadium in London," Sanchez told Arsenal's website.

"I'm looking forward to meeting my new teammates and to be playing for Arsenal in the Premier League and Champions League.

"I will give my best to Arsenal and want to make all the supporters happy."

"Alexis will add power, creativity and much quality to our squad and we are all looking forward to him joining up with us in a few weeks," Wenger told Arsenal's website. "He has consistently produced top-quality performances at the highest level for a number of seasons now and we are all excited to see him integrate into the Arsenal squad.

"I'm sure all Arsenal supporters will join me in welcoming Alexis to our club."

As excited as the Arsenal fans are bound to be, many will be hoping for more signings.

Arsenal hasn't won the Premier League title since going unbeaten in 2003/2004 and only narrowly ended its nine-year trophy drought by beating Hull in extra time in May's FA Cup final.

Sanchez's departure from Barcelona could yet be another sign that Luis Suarez is close to joining Barcelona from Liverpool.

"FC Barcelona thanks Alexis Sanchez for his professionalism and dedication for the three seasons that he has been in the first team squad, and wishes him all the best for the future," Barcelona said on its website.