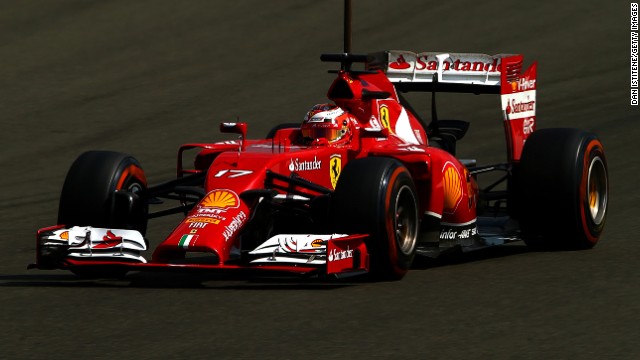 Jules Bianchi drives a Ferrari during day two of testing at Silverstone Circuit on Wednesday in Northampton, England.
STORY HIGHLIGHTS

Silverstone, England (CNN) -- It was a red letter day for Formula One driver Jules Bianchi at Silverstone this week.

The Frenchman donned Ferrari's famous scarlet uniform as he was chosen to deputize for the injured Kimi Raikkonen on the final day of in-season testing.

Bianchi, who drives for the back-of-the-grid Marussia team, told CNN he received a phone call on Monday evening asking him to stand in for the Finn, who is recuperating from a bruising crash in Sunday's British Grand Prix.

Jules Bianchi has spent one and a half seasons at Marussia.

His big chance was widely seen as an audition for a future Ferrari drive -- perhaps as soon as 2016.

The 24-year-old did not fluff his lines in Wednesday's session, setting the fastest time and clocking up 89 laps.

"I was consistent and doing good lap time," Bianchi said after stepping out the Ferrari F14 T racer.

"I think I showed the team I can work well and I can be quick, but it was a day of testing so it was not the target to compare me with other drivers.

"It was just the target to improve the car and to help the team, so I think I've done my job with that and I'm really happy."

It is not the first time that Bianchi, who has been under the wing of the Ferrari Academy since 2010, has driven in a test for the Italian marque.

But despite a reluctance to talk up his Silverstone outing, the call-up seemed to have extra significance because he was chosen to replace Raikkonen, who said after his crash he still wanted to fulfill his testing duties.

Fernando Alonso, the team's de facto No. 1, was also not brought back to England to help with the crucial final test of the 2014 season.

"If one day they want me I will be ready," Bianchi said when asked if he was hopeful his testing performance would lead to promotion to a Ferrari seat.

A spin through the Silverstone circuit

"Considering that I'm part of the academy it's the target one day, so I have to show them.

"We'll see because at the moment they have two drivers and they are doing a good job so I don't think it's the plan.

"For the moment I will just focus on what I have do which is with Marussia. I think it's really important to keep going like this.

"It's never easy to stay in Formula One but I hope I show enough to Ferrari that I deserve to stay so they can help me."

Bianchi has impressed since making his debut last season with Marussia, which uses Ferrari engines.

At the 2014 Monaco Grand Prix he claimed his first career points -- and the first for the team since it started out as Manor Racing in 2010 -- by finishing ninth.

While Bianchi continues to work towards a future at Ferrari, Alonso and Raikkonen are both out of contract at the end of 2015.

Ferrari is the only team to boast a lineup of two world champions but the experienced pairing has struggled to deliver results.

It has been another difficult season for the once-dominant force in F1. Ferrari president Luca Di Montzemolo went so far as to call it "painful."

The Ferrari engine has not matched the might of Mercedes -- which leads both the driver and constructor championships -- and team principal Stefano Domenicali resigned three races into the season, triggering structural changes within the organization.

Alonso has continued to battle on track, claiming the team's only podium with third in China, but there are question marks over Raikkonen's performance and motivation since he joined from Lotus.

The team's 2007 champion has out-qualified Alonso twice but has been beaten by the Spanish double world champion in every grand prix so far.

If Bianchi represents the future, it is no wonder Ferrari is already looking ahead.